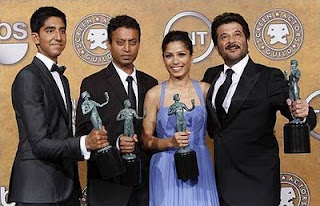 It always happens this time of year, just as all of the year's best films are finally landing in cinemas, we film critics are subjected to some of the least notable movies of the year. February release schedules are notoriously underwhelming, as all of the biggies linger in the corners of the multiplexes while box office charts are weighed down by duds. I mean honestly: Paul Blart Mall Cop has been No 1 on the US chart for two weeks now, despite astoundingly bad reviews.

On the other hand, Slumdog Millionaire is storming up the charts in both the US and UK, as well as walking off with every major award it's up for. Here's the cast with their SAG Best Ensemble award. (Best thank you at the SAGs goes to Meryl Streep - look it up on YouTube if you missed it.)

Meanwhile, I've been watching decent but not-great WWII dramas like Tom Cruise's Valkyrie and Viggo Mortensen's Good; the jarring Irish Troubles drama Fifty Dead Men Walking; the bewildering parallel-reality thriller Franklyn; and the slightly dull 19th century period piece The Young Victoria. None of these films are bad - all are worth seeing, but they're perhaps not as satisfying as they should be. It's telling then that the best film I saw last week was the ripping 1949 crime noir Gun Crazy.

Critical Week: Britain on the march 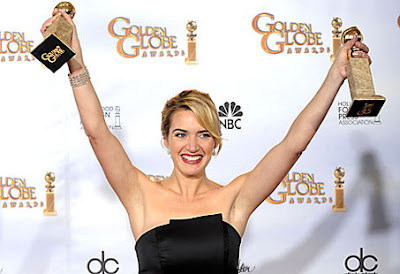 It's been a month since my last blog - hope you enjoyed the Christmas and New Year holiday! I know I did, but things are cranking up once again, mainly on the awards season front, as British talent storms its way through, sweeping up an almost ludicrous number of accolades - with Slumdog Millionaire's overall domination echoed in Kate Winslet's double Globe win and double Bafta nomination. Oscar nominations are announced on Thursday, so things are about to get even more crazed. In the meantime, I'm working with the committee to organise the London Critics' Circle Film Awards, which will be handed out at a glitsy dinner ceremony on February 4th.

Meanwhile, my screenings are back up to speed, although this isn't a notoriously promising time of year for movies, as the prestige films are behind us. Over the past week or so, I've had less than thrilling movies like Bride Wars, Hotel for Dogs, My Bloody Valentine 3D, The Unborn and Outlander - although at least all of those have some guilty pleasure value. There have also been more challenging indie or foreign films like Helen, Hannah Takes the Stairs, Three Monkeys and Katyn. Plus rather a lot of interviews at press junkets for Doubt and Milk.

Coming up this next week is Tom Cruise's Valkyrie, which they've finally decided to show to the UK press, Viggo Mortensen in Good, the British period romp The Young Victoria, Ryan Phillippe and Sam Riley in Franklyn and Ben Kingsley in Fifty Dead Men Walking.
Posted by Rich Cline at 13:04 No comments: