Last week was one for screenings of seriously ambitious movies. Stalingrad is one of the biggest budget Russian epics ever made, documenting the historical pivotal WWII battle as a massive 3D show of heroism. Not exactly the most delicately nuanced movie of the year, but utterly riveting. And then there was Lars Von Trier's two-part Nymphomaniac, a four-hour exploration of the complexities of human sexuality, specifically the feminine variety, through the eyes of a woman who thinks she's an extreme example.

Smaller films were no less inventive. From Belgium, The Strange Colour of Your Body's Tears is a mind-bending odyssey that folds David Lynch into Italian giallo in ways that are disorienting and rather awesome. And from the USA, An Oversimplification of Her Beauty is an involving, kaleidoscopic look at a relationship that never quite was, mainly due to expectations.

As a counterpoint, we had the blunt simplicity of the car racing romp Need for Speed, starring Aaron Paul, Dominic Cooper and Imogen Poots, and the British melodrama The Fold, starring Catherine McCormack as an Anglican priest grappling with grief over the death of her teen daughter. Eerily, both of these costar actresses named Dakota - Johnson (Fifty Shades of Grey) and Blue Richards (The Golden Compass), respectively.

This coming week we have Liam Neeson's airborne thriller Non-Stop, Aaron Eckhart in I Frankenstein, the animated adventure Mr Peabody & Sherman, the remake We Are What We Are, the festival favourite The Rocket and the doc Beyond the Edge. I'll also have a report on the 34th London Critics' Circle Film Awards, which are being held on Sunday night.

With few press screenings this week (no idea why), I was able to take in a couple of press launches in the art world. First was the Derek Jarman exhibition at Somerset House - a collection of films, sketchbooks, paintings and other things to celebrate the life of the iconic artist and filmmaker who died in 1994. The focus is on his years as a student at Kings College, which hosts the Inigo Rooms.

Included were the short films Studio Bankside (1970-72 7m), a kind of witty visual scrapbook taking in scenes of his work studio along the river, his friends and London architecture and landmarks; Death Dance (1973 15m), a mythical drama shot on grainy, slow Super 8 in which four naked men have a freaky encounter with death himself; and Garden of Luxor playfully layers Egyptian postcard images and performance, all drenched in lurid colours.

Around these were drawings, posters, photos, sketches (including his colourfully striking designs for the Royal Ballet production of Jazz Calendar), and other items from his life. Finally, there's a rather audacious installation that projects his kaleidoscopic 1988 film The Last of England onto five screens (at different points in the film) with the soundtrack piped in over it. The effect is a bit pushy on a conceptual level, but it's also engulfing and hypnotic as the film's themes echo off each other.

Crossovers is a series of six DVDs addressing various aspects of performance art, and the launch event featured the filmmakers speaking about their work while showing clips from the films they've made. Some of this was rather dry and academic - exploring the nature of human expression - but other elements were lively and provocative.

I had seen Gavin Butt and Ben Walters' documentary This Is Not a Dream already [the Shadows review is HERE], and it was interesting to hear them talk about the ideas in it. The other one that couldn't help but catch the audience's attention was Mel Brimfield's mock doc TV series This Is Performance Art, which cleverly - and hilariously - presents outrageous art as if it were firmly mainstream.

The other discs are Oreet Ashery's collage-style Party for Freedom, and three brainy, conversational documentaries by Andrew Heathfield: Writing Not Yet Thought with Helene Cixous, Transfigured Night with Alphonso Lingis and No Such Thing as Rest with Brian Massumi.

Critical Week: Creatures of the night

Critics who missed the latest Jim Jarmusch movie Only Lovers Left Alive at the London Film Festival in October had a chance to catch up with this enjoyably offbeat, meandering vampire drama starring Tilda Swinton and Tom Hiddleston (above). It certainly was a nice contrast to more crowd-pleasing fare like Jack Ryan: Shadow Recruit, an entertaining but run-of-the-mill spy thriller with a beefy tone and no substance at all. Even more fun, Cuban Fury is a British comedy-drama starring Nick Frost as a now-(over)grown child dancer trying to get back into the salsa groove. It has a terrific supporting cast including Olivia Colman, Rashida Jones and Chris O'Dowd.

A little further afield were two American indies: the comedy-drama G.B.F., a gay spin on Mean Girls that tries to be colourful and silly but actually has some real depth, and the prison drama Jamesy Boy, a true story that can't resist the usual watered-down cliches. Even less commercial were the overwrought, sometimes histrionic low-budget British drama Celluloid and the indulgent art-installation piece Visitors, which at least looks pretty and has a lush Philip Glass score.

This coming week is a bit thin on screenings (at the moment). The only things in the diary are the Russian epic Stalingrad, the festival head-spinner The Strange Colour of Your Body's Tears and the dark British drama The Fold. But that gives us more time to obsess about Oscar and Bafta nominations, and to prepare for the 34th London Critics' Circle Film Awards on Sunday 2nd February. I'm the chair of that event, so I certainly won't have spare time on my hands.
Posted by Rich Cline at 11:33 No comments:

Critical Week: Hanging with the boys

London critics got to see our first real 2014 movie (as opposed to a holdover from 2013) this week: That Awkward Moment seems to want to be a sex comedy but is actually a half-baked Richard Curtis-style multi-strand romantic comedy. At least the likeable Zac Efron, Miles Teller and Michael B Jordan are front and centre. The other star-powered film was Grudge Match, an uber high-concept comedy-drama starring Sylvester Stallone and Robert DeNiro as has-been boxers setting up a rematch (get it?). It's ok, but played far too straight.

Off the beaten path we had the British comedy Svengali, about a wannabe music manager trying to launch a band in London against all odds; the implausible horror thriller The Banshee Chapter, about a journalist looking into illicit government drug trials in the 1960s; the astounding award-winning Greek drama Miss Violence, which might be the most unnervingly horrific movie you'll see all year; and the moving German drama Free Fall, which takes a Brokeback-style approach to sexuality in present-day Europe.

We also have the Oscar nominations coming tomorrow, kicking the awards season into high gear for the next six weeks. Follow the action at the Shadows Sweepstakes.
Posted by Rich Cline at 09:34 No comments:

Critics got back to work this week with the first press screenings of the year accompanied by a glut of awards action - including nominees from Bafta as well as producers, directors and writers guilds. This weekend's Golden Globes kick off the ceremony season, while Oscar nominations next Wednesday shift things up another gear. But back to the movies...

Perhaps the most fun this week was had watching Bounty Killer (above), a trashy B-movie action romp that isn't very good but makes up for that with a lot of lurid energy. More low-budget fun was had with The Devil's Bargain, a devilishly twisty micro Brit-horror about three people cavorting naked in a field before the world ends ... in 1974.

Only slightly more mainstream, Giuseppe Tornatore's art-world thriller The Best Offer stars Geoffrey Rush, Jim Sturgess and Donald Sutherland. It's slightly underpowered and predictable, but looks great. Michael Cera and Gaby Hoffmann play Yanks abroad in intriguingly offbeat Chilean road movie Crystal Fairy & the Magic Cactus. Rising star Tom Schilling is a likeable slacker in the Woody Allen-style German comedy-drama Oh Boy. And the snappy documentary 1: Life on the Limit oddly blends a celebration of Formula One history with a rather sobering chronicle of the sport's fatalities over the decades.

This coming week is a mixed bag, as we've already seen most of the awards contenders that are opening in cinemas over the next month. Up next are Zac Efron and Michael B Jordan in That Awkward Moment, Nick Frost in Cuban Fury, the British comedies Svengali and 8 Minutes Idle, and the award-winning Greek mystery Miss Violence.
Posted by Rich Cline at 23:13 No comments:

I've been deliberately avoiding movies over the Christmas and New Year break, but there's been plenty of television to distract me. The most anticipated holiday show was obviously the return of Sherlock on New Year's Day for a third series - it's been a long two-year wait. Benedict Cumberbatch, Martin Freeman and Rupert Graves are back for another brain-bender that's as engaging as ever, but feels more like a standard TV episode than previous seasons' movie-style instalments. It's also rather gimmicky and indulgent, so let's hope they calm down a bit for Sunday night's second episode. 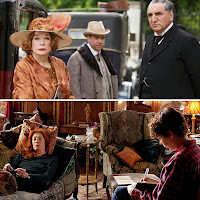 Meanwhile, there was the annual Downton Abbey Christmas special. Last year they used this as an opportunity to essentially ruin the holidays with a horrific fatality. This year was much less momentous, merely entangling the soapy story-strands further while having a bit of fun with American guest stars Shirley MacLaine and Paul Giamatti. Slightly more prestigious was The Thirteenth Tale, a moody ghost story that pitted acting veteran Vanessa Redgrave opposite the equally gifted Olivia Colman as a dying novelist and her suspicious biographer, respectively. A nicely made film, with another involving turn by Colman, but Christopher Hampton's script was undercooked.

I also finally got caught up with the American version of the rude comedy Shameless - I was behind by a whole season and managed to watch all of series 3 over the holidays. Superb writing, directing and acting from the entire cast pushed these characters much further than we ever would have imagined. Few TV shows can induce squirms like this one, bless it.

I'll be back on the screening circuit starting next week, with a number of interesting things in the diary, including Michael Cera in Crystal Fairy, the post-apocalyptic romp Bounty Killer, the British musical comedy Svengali, the horror romp Devil's Bargain, the Venice-winning thriller Miss Violence, the acclaimed documentary After Tiller and the Formula One doc 1: Life on the Limit.
Posted by Rich Cline at 09:35 No comments: