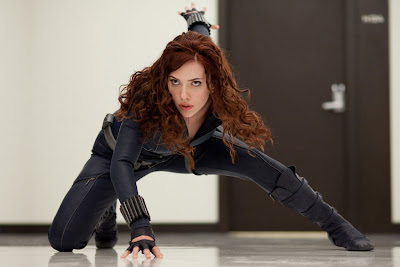 This big news this week is that Scarlett Johansson, with that tight catsuit and crash-bang fight moves, walks off with Iron Man 2, leaving us hoping for a Black Widow spin-off. Actually, I don't agree with the moaning critics; I found the film to be good fun despite the fragmented, thinly constructed plot. There are strong performances from Mickey Rourke and Sam Rockwell, while Robert Downey Jr and Gwyneth Paltrow easily slip back into that flirty banter that made the original seem so much better than it was.
Other Hollywood offerings last week included Jennifer Lopez's return to the rom-com after a seven-year break in the formulaic-but-watchable The Back-up Plan and Bruce Willis in the corny-but-watchable action comedy Cop Out. Much more interesting was Chris Morris' provocative Four Lions, which finds comedy in its characters and drama in its British terrorism premise. And at 87, Alain Resnais gives Wild Grass a bewildering but thoroughly magical tone.
But the week's biggest surprise was Francis Ford Coppola's Tetro, which was largely shrugged off at Cannes last year but turns out to be a gorgeously personal film with all sorts of artistic and dramatic layers - plus terrific performances from Vincent Gallo and Maribel Verdu.
This week's big screening is, erm, the remake of A Nightmare on Elm Street. I'm not expecting much from that, but I am rather looking forward to REC 2 (the sequel to the Spanish thriller) and The Secret in Their Eyes (this year's foreign Oscar winner), as well as two French films: the romantic-comedy Heartbreakers with Romain Duris and Vanessa Paradis, and Coco Chanel & Igor Stravinsky with the nearly ubiquitous Mads Mikkelsen. Less enticing are the comedy She's Out of My League and the cop drama Brooklyn's Finest. And I'm not sure what I'll make of the artful oil-mining doc Petropolis.
Posted by Rich Cline at 23:21 No comments:

The big press screening here in London this past week was for the lively action romp The Losers, starring Jeffrey Dean Morgan, Zoe Saldana, Chris Evans and Idris Elba as a team of experts trying to get revenge on someone. Or something. But the thin plot is only one of the film's problems - and none of this will matter at the box office as it's clearly going for the same audience as Kick-Ass or the upcoming The A-Team.

Two other Hollywood star vehicles wobble as well - both are watchable, but neither is as good as it should be. I'm talking about Miley Cyrus' weepy chick flick The Last Song and The Rock as the Tooth Fairy. A much better effort from America is The Joneses, in which Demi Moore and David Duchovny are perfectly cast as a desirable, affluent couple, although the film's smart satire kind of runs out before the end.
So we turn to smaller budgets, and the biggest surprise of the week is Britain's first movie designed and shot in 3D, StreetDance. Amazingly, this film manages to rehash that Step Up/You Got Served plot into something that's actually engaging. There were also two inventive historical foreign films: Women Without Men, about Iran's 1953 coup, and The Time That Remains, about Israel's partition in 1948. And finally we have two gripping British documentaries: the privacy-issue action doc Erasing David and the football-as-religion 1990 World Cup doc One Night in Turin.
Next week we have Jennifer Lopez in The Back-up Plan, Bruce Willis in Cop Out, the provocative British terrorism comedy Four Lions, Francis Ford Coppola's personal project Tetro, Alain Resnais' acclaimed Wild Grass, and a little blockbuster called Iron Man 2.
Posted by Rich Cline at 14:39 No comments:

The last couple of weeks have been a bit bonkers in the press screening rooms, as we have been subjected to the nuttiest movies in recent memory, starting with Julianne Moore's latest trip into gonzo thriller territory (remember The Forgotton?) in Shelter, costarring Jonathan Rhys Meyers as a scene-chewing nutcase suffering from multiple-personality disorder. Or is he? (Onimous chord!) It's just stupid enough to be watchable, which is more than can be said for Repo Men, which features more Oscar-calibre actors (Jude Law and Forest Whitaker) slumming it in an action romp that's bereft of even the tiniest shred of logic.
More wackiness ensued in a couple of British films: Gurinder Chada's Indians-in-London comedy It's a Wonderful Afterlife isn't actually a spoof of the Frank Capra classic, although it does include a pastiche of a key scene from Brian DePalma's Carrie. And then there's Pimp, a gritty look into London's prostitution trade, featuring of course Danny Dyer, that also wobbles a bit as it goes along.
Much better was the tightly wound Austrian Oscar nominee Revanche, a twisty, low-key look at revenge, and the Tom DiCillo documentary about The Doors, When You're Strange, intriguingly made with only archive footage (including lots of amazing never-seen clips) and no reflective narration at all.
Finally, foreign films kept us on our toes, with the askew Japanese drama Krakera: A Piece of Our Life, the astute Uruguayan drama Leo's Room, and the Spanish teen terrorism thriller Clandestinos.
This coming week we've got Miley Cyrus in Nicholas Sparks' The Last Song, The Rock as the Tooth Fairy, Demi Moore in The Joneses, Jeffrey Dean Morgan in The Losers, Britain's first 3D dance movie Street Dance and the Iranian historical drama Women Without Men.
Posted by Rich Cline at 11:36 No comments: