Requisite Blog Photo: Who's up for a heist? 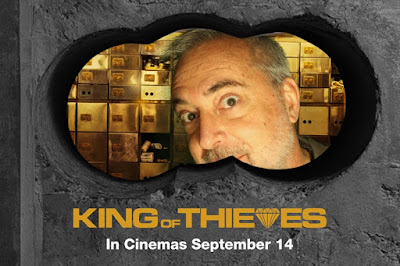 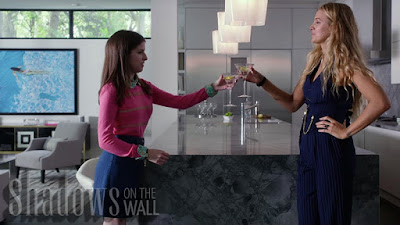 It's been another eclectic week in London screening rooms. We had the genre mash-up A Simple Favour, starring Anna Kendrick and Blake Lively in a story that includes suburban comedy, buddy drama and Hitchcockian mystery. Another odd mix, The Happytime Murders stars Melissa McCarthy and a cast of puppets as a serial killer is on the loose. It's misguided but has its moments. And Action Point is a Jackass-style comedy from Johnny Knoxville about a perilous theme park. The stunts are sometimes funny, but nothing else is.

Gaspar Noe was in town to unleash his new film Climax on British audiences at FrightFest last weekend. It's a brilliantly swirling dance-based descent into hellish confusion. And I had a chance to talk to Noe about it. Other FrightFest titles I caught: Upgrade is a futuristic thriller starring Logan Marshall-Green as a guy who has his body rebuilt by technology, which of course goes awry. The Man Who Killed Hitler and Then the Bigfoot is surprisingly nothing like its trashy title; it's an involving drama about an old man (Sam Elliott) coming to terms with the things he did as a young man (Aidan Turner). The Australian romp Boar, refreshingly uses puppets instead of digital effects to send a gigantic wild pig on a hyper-violent killing spree in the Outback. And The Cleaning Lady is eerie horror about a silent cleaner with a secret agenda.

Three more offbeat movies: From Germany, The Year I Lost My Mind is about a young man who begins stalking his own robbery victim in unsettling, underdeveloped ways. The documentary George Michael: Freedom was directed by the man himself just before he died, tracing his life with sensitivity and lots of amazing interviews and music. Shown on British TV last year, it's coming to cinemas as a director's cut. And Ruminations documents the life of Rumi Missabu, one of the original Cockettes. It's colourful and essential for fans of the late-60s gender-blurred performers.

Coming up this next week we have Jack Black and Cate Blanchett in The House With a Clock in its Walls, Annette Bening in The Seagull, Paul Dano's directing debut Wildlife, Jeremy Irons in An Actor Prepares, South African drama Five Fingers for Marseilles and the artist-activist doc I Hate New York.
Posted by Rich Cline at 15:32 No comments: 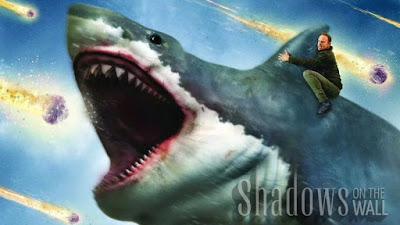 Yes, the big event this week was the release of The Last Sharknado: It's About Time. I suspect the title is a joke, but in the Sharknado pantheon this certainly isn't the worst episode. Of course it's terrible, but it's also a lot of fun. Idris Elba's directing debut Yardie has a lovely look and vibe, with a terrific cast led by Aml Ameen, which helps make up for a rather familiar East London crime plot. Kelly Macdonald is terrific in Puzzle, a low-key drama about a woman who begins to realise that she has never lived her own life. It's beautifully observed.

Out of the mainstream, I Am Vengeance is a muscly British action movie starring beefy he-man Stu Bennett as a guy on a mission. The plot is ludicrous, but it's still entertaining. From Italy, Matteo Garrone's Dogman has been gathering prizes at film festivals, and deservedly so. It's a clever updating of those 1950s Italian neorealist dramas with a wonderfully compelling central character.

And there were two docs: Gun No 6 traces the 11 shootings that have been linked to England's most notorious illegal handgun. It's a fascinating look at police investigations, and also inventively sees things through the eyes of the criminals and victims with interviews and re-enactments. And Hot to Trot follows two couples as they compete in a same-sex ballroom dance competition, leading to the Gay Games in Cleveland. The central narrative is fascinating, but the real power is in the moving personal stories of the dancers.

Coming up this next week we have the hit comedy Crazy Rich Asians, Melissa McCarthy in The Happytime Murders, Blake Lively and Anna Kendrick in A Simple Favour, the British heist adventure King of Thieves, Johnny Knoxville in Action Point, and Gaspar Noe's Climax, plus at least two FrightFest films: Boar from Australia and The Cleaning Lady from America.
Posted by Rich Cline at 18:58 No comments: 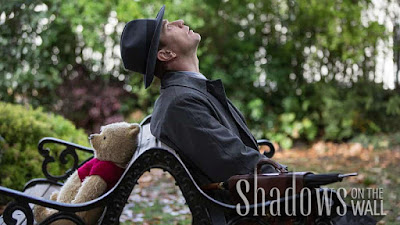 As the weather finally broke, giving us relief from this relentless heatwave, screenings this week for London-based critics were led by Christopher Robin, which was a nice surprise: a sensitive live-action Winnie-the-Pooh sequel starring Ewan McGregor. Although it might be a little slow for children. Much livelier but not nearly as engaging, The Festival has a bright young cast and superb real-world setting, but the story is thin and the jokes simply aren't funny. Featuring an even starrier young cast, including Ansel Elgort, Taron Egerton and Jeremy Irvine, Billionaire Boys Club is a slick money-based thriller that feels eerily over-familiar.

A little further afield, there was the superb Irish thriller Black '47, set during the devastating 19th century potato famine and featuring terrific characters in a riveting story. David Tennant chomps on the scenery as a killer in Bad Samaritan, a nasty little thriller with very little in the way of subtext. We the Animals is a simply stunning coming-of-age drama, gorgeously shot and played on every level. And Memoirs of War is a wrenching, slow-burn WWII epic starring Melanie Thierry as author-filmmaker Marguerite Duras.

Still further off the beaten path, Redcon-1 is a crazed British zombie apocalypse adventure that makes very little sense on any level. From Norway, Revenge is a, well, revenge thriller that's insinuating and involving as its story twists and turns. The sensitive German drama Paths traces the dissolution of a long-term relationship in a quietly meaningful way. And the documentary Nureyev is perhaps a little too ambitious for its own good, with a lot going on with the imagery, sound and voiceovers, but a too-"official" narrative.

This coming week we have Idris Elba's directing debut Yardie, Australian thriller I Am Vengeance, acclaimed Italian drama Dogman, the German thriller The Year I Lost My Mind and three documentaries: Hot to Trot about ballroom dancing, Gun No 6 tracing the life of a firearm and the, ahem, self-explanatory American Circumcision. 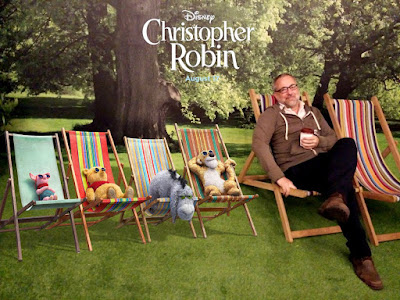 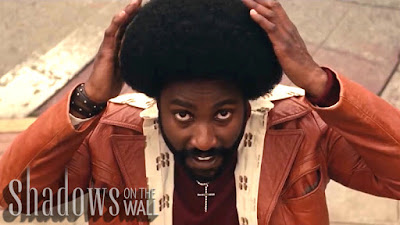 London critics finally had a chance to catch up with Spike Lee's Cannes prize-winning BlacKkKlansman, and it was well worth the wait. The film is a fierce, skilfully told true story with lots of present-day resonance. John David Washington (son of Denzel) is terrific in the title role. Meanwhile, the week's blockbuster was the tongue-in-cheek guilty pleasure The Meg, with Jason Statham doing what he does best, diving into the action and winking at the camera. But the latest near-future young adult adventure The Darkest Minds was a disappointment, despite a strong cast led by Amandla Stenberg and Harris Dickinson.

Outside the mainstream, we had the animated true story Sgt Stubby: An Unlikely Hero, which is involving and very moving. Making a Killing is a wildly entertaining true crime romp, told with heavy doses of irony. Tides is a meandering, improv-style British comedy-drama set on a canal boat holiday. And The King is a staggeringly clever documentary about Elvis Presley, layered with a telling exploration of American culture today.

There were also three excellent European films. From France, The Guardians is a gorgeous drama about women who run the family farm while their men are off fighting WWI. From Germany, The Captain is a pitch-black satire about a deserter who assumes power as an officer during the final weeks of WWII. And from Iceland, the unnerving, involving Under the Tree weaves irony into a darkly witty story of a war between two neighbours.

Films screening in this coming week include Ewan McGregor in Christopher Robin, Ansel Elgort in Billionaire Boys Club, Hugo Weaving in Black '47, the British comedy The Festival, the coming-of-age drama We the Animals, the zombie apocalypse thriller Redcon-1, the German drama Paths, and the ballet documentary Nureyev.
Posted by Rich Cline at 22:30 No comments: 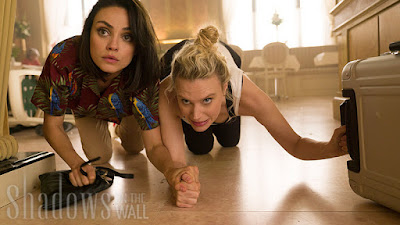 It's been another hot week in London, with a heatwave arriving just in time for the weekend. Again. Thankfully, screening rooms are nicely cooled. Films I caught up with this week include the action comedy The Spy Who Dumped Me, a genuinely hilarious romp anchored by Mila Kunis and the riotous Kate McKinnon. With its UK release delayed by the World Cup, Ant-Man and the Wasp was finally screened, and it's a lot of fun. Although it's nothing we didn't expect. And one to watch is the Japanese anime Mirai, a gorgeous, family-friendly story that's bound to cross boundaries.

Off the beaten path, we had the Portuguese arthouse drama The Forest of the Lost Souls, a cleverly twisty story about mortality that shifts into a slasher horror. From Italy, Sicilian Ghost Story is a sumptuously inventive take on a true story, told through the eyes of two pre-teens whose sweet romance is interrupted by a mafia kidnapping. The micro-budget American drama Brotherly Love bravely tackles the issue of homosexuality through the eyes of a young man training for the priesthood. And The Eyes of Orson Welles is a treat for movie fans, a love letter from British archivist Mark Cousins to one of the last century's most iconic filmmakers.

Coming up this next week, screenings include Jason Statham vs a giant shark in The Meg, Spike Lee's acclaimed BlacKkKlansman, Michael Jai White in the thriller Making a Killing, the British animation Sgt Stubby, the British canal-boat drama Tides, the Icelandic comedy Under the Tree, and the Elvis/America doc The King.
Posted by Rich Cline at 13:59 No comments: