Critical Week: Welcome to the club

UK critics had a chance to screen Richard Linklater's new comedy Everybody Wants Some!!, a spiritual follow-up to two of his earlier films: Dazed and Confused and Boyhood. It's clever, funny and very sharp. Jake Gyllenhaal is simply terrific in Jean-Marc Vallee's Demolition, a parable that is a bit obvious in its metaphors but still wrenchingly powerful. By contrast, Melissa McCarthy's The Boss has a lot of potential, but it's squandered with filmmaking that's based on pratfalls instead of the vivid central character.

John Cusack and Samuel L Jackson find more intriguing characters than expected in the horror thriller Cell, a freaky twist on the zombie genre from Stephen King. Rio I Love You is the latest collection of shorts in the Cities of Love series, and a much more coherent, warm and involving film as a whole. Arabian Nights: The Desolate One is the second in Miguel Gomes' inventively surreal trilogy. This one's drier than the first one, but has a terrific dog at the centre of the third set of shorts.

Further into indie movie land, Daddy is a well-made and sharply acted American film that shifts uneasily from a lively rom-com into a very, very dark drama. And there were two low-budget British crime dramas: The Violators is a compelling story of siblings in crisis, while the fact-based Hard Tide follows a guy who discovers something valuable in himself. Both give in to cliches and underpowered filmmaking.

Of course, proper reviews will follow in each film's week of release - some are already up on the site.

Screening this next week: Tom Hanks in A Hologram for the King, Ricky Gervais in Special Correspondents, Susan Sarandon in Mothers and Daughters, the apocalyptic Aussie drama These Final Hours, the final episode in the trilogy Arabian Nights: The Enchanted One, Michael Moore's sociological doc Where to Invade Next and the British public unrest doc The Hard Stop. We also have a three day weekend ahead!

This week's big movie event was Secret Cinema: 28 Days Later, which is great fun but a bit of a let-down after the highs of Back to the Future and Star Wars. The elaborate interactive experience runs until the end of May in London (see my FULL REVIEW). Greta Gerwig, Ethan Hawke and the divine Julianne Moore star in Maggie's Plan, Rebecca Miller's Woody Allenesque New York comedy, which is a bit uneven but very entertaining. Nicolas Cage and Elijah Wood stage a heist in the Las Vegas black comedy The Trust, also entertaining if rather thin and forgettable.

Off the beaten path, there was the German drama You & I, a cleverly original look at three young men on a road trip, breaking all the rules about sexuality and friendship. What We Have is a thoughtful, haunting Canadian film about a young man trying to escape his past. Arabian Nights: The Restless One is the first part of Miguel Gomes' fiendishly inventive trilogy combining classic tales with a satire of present-day austerity. And there were two documentaries: the lively and moving if rather limited Street Dance Family follows the UK's most successful dance troop, while Chantal Akerman's No Home Movie is a difficult, experimental doc with some striking insights.

This coming week, we have the next Avengers action epic Captain America: Civil War, Jake Gyllenhaal in Demolition, John Cusack in Cell, Richard Linklater's Everybody Wants Some!!, the anthology movie Rio I Love You, the true thriller Hard Tide, the British drama The Violators and part 2 in the series Arabian Nights: The Desolate One.

Requisite Blog Photo: They made me choose sides 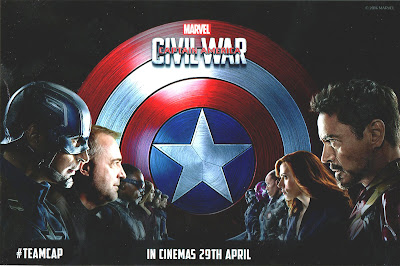 I finally caught up with a press screening last week for Eye in the Sky, starring Helen Mirren (above) as a British military officer coordinating a drone strike in Nairobi with pilots in America and operatives on the ground in Kenya. Remarkably timely and gripping. There was also a gala press screening for The Jungle Book, Jon Favreau's remake of the 1967 animated classic. This one is also animated, but in a remarkably photorealistic style. It looks so cool that we don't mind the simplistic adaptation of Kipling's stories.

Off the beaten path, Colonia stars Emma Watson and Daniel Bruhl in a gripping true-life thriller set amid the militaristic horrors of 1973 Chile. Adult Life Skills is a quirky British comedy-drama starring Jodie Whittaker as a rather annoying young woman trying not to grow up. Fan is a Bollywood action thriller starring megastar Shah Rukh Khan as a massively famous movie actor (no stretch) and also as his 20-years-younger stalker fan (impressive). And the entertaining documentary Weiner follows former Congressman Anthony Weiner as he tries in vain to steer his New York mayoral campaign away from his sexting scandal.

In the busy week ahead, we have screenings of the next Avengers extravaganza Captain America: Civil War, Julianne Moore in Maggie's Plan, Nicolas Cage in The Trust, the British dance sequel Streetdance Family, the Canadian drama What We Have, the German drama You and I, the first in the Portuguese trilogy Arabian Nights Volume 1: The Restless One and Chantal Akerman's No Home Movie. I'll also be attending Secret Cinema: 28 Days Later this weekend - watch for the review early next week.
Posted by Rich Cline at 18:02 No comments: 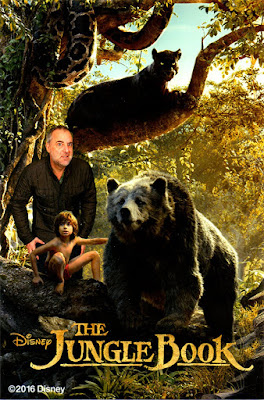 And Disney made my very own trailer for their movie using four photobooth stills. Hmmm...

Email ThisBlogThis!Share to TwitterShare to FacebookShare to Pinterest
Labels: the jungle book

Shadows on the Stage: A cry for freedom

Inspired by the true story of Mahmoud Asgari and Ayaz Marhoni, who were beaten and publicly executed in Iran in 2005 after being accused of homosexual coercion. The details of the story have never been released, but playwright and human rights lawyer Jay Paul Deratany gathered as much information as possible before weaving the story into a wrenching exploration of youthful hope in a place where freedom of thought is prohibited.

The play centres on Ayaz (Viraj Juneja), a smart 15-year-old whose professor mother (Silvana Maimone) has raised him with an appreciation of banned foreign novels like Catcher in the Rye and Les Miserables. His 14-year-old school friends Mahmoud and Fareed (Andrei Costin and Merch Husey) are more interested in playing football than reading a book. And Fareed is appalled to learn that Ayaz is carrying around "haram" (forbidden) novels. Mahmoud is more curious, and soon they are secretly meeting so Ayaz can recount these taboo stories to him. They also discover that they share a mutual attraction, which of course is also haram. And in a flash of jealousy, Fareed reports them to the authorities. Ayaz is locked up by a brutal jailor (Fanos Xenofos) and both are brought before a mullah judge (George Savvides). 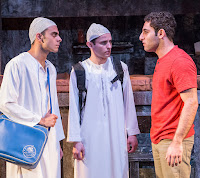 Since it's based on a true story, where this goes is somewhat predictable, but Deratany fills scenes with artful observations, from literary references to quotes about love and humanity from the Quran. What emerges is a sensitive exploration of a society under the grip of Sharia law - although there's a clear sense that this is an oppressive political system using religion as an excuse to dominate and harshly control the population. Especially the female population.

As with most Above the Stag productions, this one is ambitiously staged by director Gene David Kirk and sharply performed in an intimate space. Designer David Shields creates the atmosphere of a prison, with brutal concrete areas that force the characters to toe the line. This immediately establishes a grave tone, lightened in the early scenes with witty asides. After the interval, there's no more levity, and the emotional kicks get increasingly forceful. This is a seriously haunting play that not only highlights the injustice of any tyrannical regime but also tenderly portrays the honest humanity of young people who are just beginning understand that their rulers are oppressors. For these boys it's natural to dream of a bigger world, to yearn for freedom and to find a soulmate in an unexpected place.

Don Cheadle's passion project Miles Ahead was screened to UK critics just as it was released in the US. It's a strikingly impressionistic biopic, avoiding the usual structure for a more kaleidoscopic approach that's visually impressive and emotionally tricky. Natalie Portman is terrifically steely in the Western Jane Got a Gun, which kind of loses track of its characters as it becomes more focussed on the action violence. Oddly, both films costar Ewan McGregor.

Also this week, Kevin Costner stars in Criminal, a fiendishly entertaining bit of high-concept action set in London. Rebecca Ferguson is solid in two roles in the rather moody Cold War romance Despite the Falling Snow. And Nicolaj Lie Kaas and Fares Fares are back for another cold case in the astutely well-made if oddly un-resonant The Absent One.

Even more interesting was the lunch I attended on Thursday at which the Critics' Circle presented Maggie Smith with our annual award for Services to the Arts, voted on by all six sections of the circle (film, theatre, music, dance, art, books). It was a lively event, and a very rare chance to hang out with the national treasure that is Dame Maggie, who was on great form. Alas, I didn't get up the nerve to tell her that I first saw her in person on-stage at a taping of The Carol Burnett Show when I was only 13!