Critical Week: Of men and manliness

On holiday in Los Angeles in the wake of the Oscars, I've caught up with two films that take very different approaches to masculinity - one from a comically human perspective and the other virtually bereft of all humour. But each is watchable in it's own way...

Wanderlust
dir David Wain; with Paul Rudd, Jennifer Aniston 12/US ****
An unusually sharp script makes this silly comedy thoroughly enjoyable, even when it tips over the top. And it helps that there's terrific chemistry between Rudd and Aniston as a New York couple that loses everything and decides to try life on a free-living countryside commune for a change. Yes, there's some lesson-learning involved, but the filmmakers never preach at us, instead keeping us entertained with a continual procession of hilariously wacky characters who grow on us thanks to the solid cast. (Notable scene-stealers include Justin Theroux, Kerri Kenney-Silver and a rather brave Joe LoTriglio.) And the genuinely riotous humour keeps us warching even if some gags don't work at all, such as Rudd's appalling dirty-talk. It's also refreshing that the script never quite gives into its trite save-the-ranch plotting. Thankfully the director steps it back, allowing the actors to ad-lib and run with the characters.

Act of Valor
dir Waugh/McCoy; with Roselyn Sanchez, Nestor Serrano 12/US ***
A simplistic script nearly undoes this energetic doc-style thriller starring real US Navy Seals as, well, US Navy Seals who take on an ambitious mission to stop a cataclysmic terrorist attack on America that "would make 9/11 seem like a walk in the park". The film is especially well-shot and sharply edited to make the most of the action sequences, which bristle with tension and vividly show off the finely honed skills of the Seals. On the other hand, the dialog scenes are almost ludicrously earnest, neary defeating the largely non-actor cast. Although the two leads - Dave and Rorke - come across nicely, and help us connect to their emotive family side-plots. But even the film's slick sense of urgency can't make up for the dubious premise in which self-proclaimed good guys are justified in shooting anyone who moves (except unarmed women of course). And this assumption that America's holy war is more honourable than anyone else's might be too much for international audiences to swallow.
Posted by Rich Cline at 00:51 No comments:

Oscar night: out on a limb

Here are my hopes, fears and predictions for Oscar night on Sunday, as usual. I'll be watching on TV in Los Angeles, not far from the Kodak Theatre but avoiding all of that nonsense. And even though the winners feel as predictable as always, Academy voters can still surprise us. As always, I'm hoping for some big upsets...

P I C T U R E
Will win/should win: The Artist
Possible: The Descendants
Dark Horse: The Help
Would be a crime: Hugo

Critical Week: Come fly with me

I'm in Los Angeles this week, enjoying a bit of sunshine while visiting family and friends. So I'm able to catch up with a few films that haven't been screened yet to UK critics. I have a shortlist of things to see, and here's the first one...
Red Tails
dir Anthony Hemingway; with Cuba Gooding Jr, David Oyelowo 12/US ***
An inspiring true story from American military history provides plenty of drama and adventure for this engaging film, even if the over-earnest approach makes it seem a bit silly at times. It centres on the Tuskegee airmen, black pilots who had to fight for equality in the segregated forces during WWII. It's fairly heavily fictionalised, with subplots that range from romantic involvement with the Italian locals, capture and escape from the Nazis and battling with the top brass in the USA for the right to fight alongside white pilots. Sure, all of these things are based on real events, but the script turns them into a bit of melodrama to spice up a central story that certainly doesn't need any spicing up. And even if the film suffers from producer George Lucas'  trademark blanding-down (as seen in Star Wars I to III), it's still a rather thrilling story, with a terrific cast and several eye-catching aerial battles that keep us on the edge of our seats. It also feels like it's been edited down from a much longer film, as scenes are chopped abruptly, which makes us wonder if it might have been better as a TV series.

In the days before I flew out here from London, there were some nice surprises for critics, including two blockbusters that looked rather annoying but turned out to be hugely entertaining: the big Martian adventure John Carter and the hilarious film adaptation of the 80s TV series 21 Jump Street. Foreign offerings were the brilliantly elusive Canadian drama Cafe de Flore, the insanely violent and thoroughly enjoyable Indonesian thriller The Raid and the Hugely emotional Belgian coming-of-age drama North Sea Texas.  And American indies included the colourful L.A. voguing drama Leave It on the Floor and the terrific doc Corman's World, a lively look at the king of the B-movies. 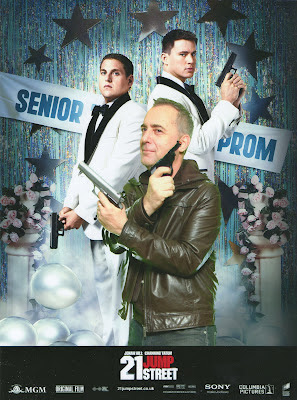 The British Academy handed out the Baftas last night at another lavish, starry ceremony in the Royal Opera House. There were a few surprises among the expected winners - most notably The Skin I Live In taking the foreign-film prize over critical favourite A Separation. Otherwise, The Artist deservingly stomped its way through the competition to take home seven awards, Tinker Tailor Soldier Spy was a welcome winner in the British film category, and Meryl Streep saw off her increasingly feisty competitor Viola Davis for Best Actress. While Octavia Spencer maintained her bandwagon winning streak, seeing off competition here from Dame Judi Dench. 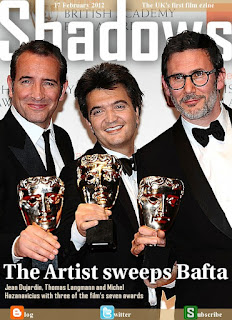 Like the Oscars in two weeks, Bafta brought back a venerable host, Stephen Fry, whose wry, brainy humour was a nice change from the usual goofiness. As always, the acceptance speeches were charming, red carpet outfits were glamorous and presenter pairings were sometimes perplexing, and little was particularly memorable. Although Meryl losing her shoe on the way up the steps was amusing, especially as presenter Colin Firth returned it to her foot. On winning Best Adapted Screenplay, Peter Straughan made a lovely, touching comment about his late wife and cowriter Bridget O'Connor, who we'd just seen in the In Memorium montage. Rising Star winner Adam Deacon was hilariously distracted by presenter Christina Hendricks' cleavage. And at least Hugh Jackman and Russell Crowe looked like they were having fun. Was it too much to hope that they might hum a few lines from one of their Les Miserables tunes? But then, Tom Jones had already opened the show with Thunderball.
As for films seen by London critics this week: Damsels in Distress is Whit Stillman's welcome return to the screen after a 13-year gap; This Means War is a guilty pleasure action romance with a surprisingly engaging comical performance from Tom Hardy; the pitch-black horror-comedy Blood Car is seriously deranged; and The Phantom Menace in 3D is still dodgy (and the 3D almost irrelevant) but was great fun to watch on a big screen in a huge cinema patrolled by storm troopers, Darth Maul and Anthony Daniels.
Posted by Rich Cline at 11:52 No comments:

Requisite Blog Photo: Use the force 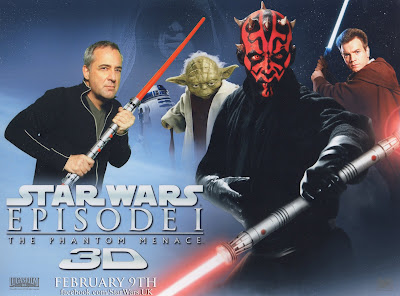 It was a very late press screening - the film opens on Friday, after all - but Fox made up for it with the green-screen photo and introductions for the screening from R2D2, Darth Maul, a platoon of storm troopers and Anthony Daniels in person!
Posted by Rich Cline at 23:04 No comments:

Channing Tatum seems to be everywhere at the moment: being stomped on by Gina Carano in Haywire, plugging two new movies everywhere, including hosting Saturday Night Live, and trailers and photo-leaks from G.I. Joe: Retaliation, 21 Jump Street and Magic Mike. London critics had a chance to see The Vow this past week, an over-sentimentalised romantic drama based on an intriguing true story. Producers clearly understand that Tatum's main drawing power is that he likes to be shirtless as much as possible; his hilarious Matthew McConaughey impersonation on SNL was perhaps a little too on-the-nose.

Two other big movies screened for us this week. We got to see John Cusack as Edgar Allan Poe, solving the mystery of his life in the gothic thriller The Raven, while Tahar Rahim and Antonio Banderas stormed the desert in the sweeping Arabic epic Black Gold. From Britain, a bunch of unknown dancers - plus Tom Conti - fused evergetic street and Latin dance steps in the 3D sequel StreetDance 2, while Stephen Graham and Adewale Akinnuoye-Agbaje starred in Best Laid Plan, an intriguing British variation on Steinbeck's Of Mice and Men.

Off the beaten path were two documentaries (the controversial, unnerving Russian political doc Khodorkovsky and the gorgeously made exploration of the gaps in Indonesian society Position Among the Stars), a filmed version of the Royal Opera House's stunning stage production of Madam Butterfly 3D (I'm not particularly an opera fan, but I loved it!), and a pristinely restored print of Renoir's WWI classic Le Grande Illusion, which is quite simply unmissable.

This coming week we have Reese Witherspoon choosing between Tom Hardy and Chris Pine in This Means War, the French drama Angel & Tony, and a 3D conversion of Star Wars Episode I: The Phantom Menace - watch out, Jar Jar is comin' atcha!
Posted by Rich Cline at 12:18 No comments: 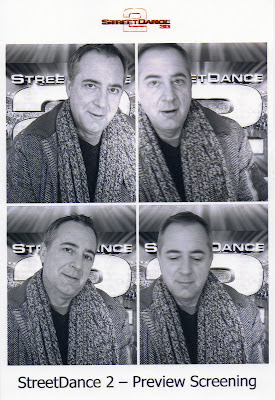 In a photobox just before this morning's press screening of StreetDance 2, I think the above four images were a prediction of how the film would progress. Clockwise from top-left: (1) OK here we go again; (2) I'm shocked that this is actually rather good fun, at least when the actors aren't talking; (3) and of course here we go with the requisite romantic subplot and the penultimate "oh no it's all a disaster" plot point; (4) actually that Latino-street fusion finale in 3D was pretty cool.
And below, taken back at home, with my special orange StreetDance 2 3D specs. Woo! 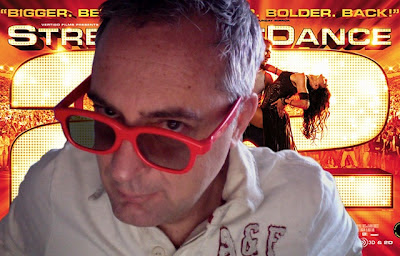