London critics caught up with the next tentpole this week, namely Pirates of the Caribbean: Dead Men Tell No Tales (aka Salazar's Revenge), the fifth in the swashbuckling franchise starring Johnny Depp. While I enjoyed the previous four romps, this one felt overstuffed in every way (too many people, too many rambling plotlines, too many digital effects). I was happy when it finally ended.

Everything else was a bit smaller. Chris Evans is excellent in the sharply well-made drama Gifted, which manages to remain emotionally resonant without tipping into sentimentality. Tommy's Honour is a terrific story of the Scottish father and son who created the modern game of golf, nicely played by Peter Mullan and rising star Jack Lowden. Although the film is a bit uneven. The soapy Spanish comedy Wild Awakenings wins us over with its ridiculous tale of lust on a horse ranch. And the documentary Dying Laughing is a fascinating look at the life of a stand-up comic, as told by rather a lot of people who became very successful at it.

And finally, I revisited the early 1990s cult series Twin Peaks and rewatched the 1992 movie Twin Peaks: Fire Walk With Me before diving into the two-hour pilot episode for this 25-years-later sequel series. It's all rather bonkers, but sublimely so. And I look forward to the next 16 episodes.

Coming up this week is a very late press screening of Wonder Woman (buzz has been good but for some reason they are holding this one close to their chest), plus a number of films that will be screened at the forthcoming Sundance Film Festival London - watch this space. Meanwhile in France, the Cannes Film Festival winds up with its awards over the weekend. Expect controversy as usual.
Posted by Rich Cline at 23:54 No comments:

Critical Week: Queens of the jungle

A few big Hollywood movies screened for the London press over the past week, including Snatched, the mother-daughter kidnapping romp starring Goldie Hawn and Amy Schumer. It's silly enough to be a guilty pleasure, but could have been a lot more. Dwayne Johnson and Zac Efron lead the charge in the goofy action-comedy movie version of the iconic TV series Baywatch. And Charlie Hunnam takes the lead in Guy Ritchie's entertaining and somewhat rushed approach to King Arthur: Legend of the Sword.

Meanwhile, Dominic Cooper struggles to elevate the terrorism thriller Stratton above B-movie status. Much better were a couple of foreign movies: from China, I Am Not Madame Bovary is a fiendishly clever exploration of social connection and darker motivations, while Machines is a riveting, relevant, gorgeously shot documentary about workers in an Indian fabric factory.

Coming up this next week, while many London-based critics have decamped to the South of France for the Cannes Film Festival, we will catch up with Johnny Depp's fifth turn as Jack Sparrow in Pirates of the Caribbean: Salazar's Revenge (aka Dead Men Tell No Tales), Chris Evans' drama Gifted, the Scottish biopic Tommy's Honour, the animated adventure Monster Island, the Mexican rom-com Wild Awakening and the shorts compilation Boys on Film 16: Possession.
Posted by Rich Cline at 21:15 No comments: 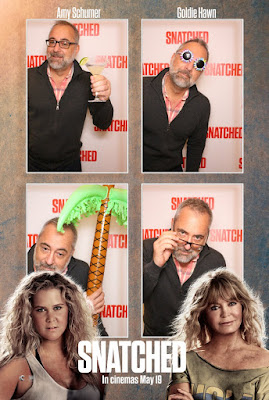 Press screenings are starting to crank up again after an early-May lull, perhaps because so many big movies are coming up. Although it's likely to quiet down when most London-based journalists (not me, thankfully) decamp to Cannes 17-28 May.

I enjoyed catching up with the Sundance hit The Big Sick, Kumail Nanjiani's autobiographical comedy, which cleverly depicts multi-cultural America with its awesome ensemble cast. The indie road comedy Folk Hero & Funny Guy was also enjoyable, starring the superb Wyatt Russell and Alex Karpovsky as childhood pals with a surprisingly complex relationship. But of course this week's biggest movie was Alien: Covenant, Ridley Scott's skilfully made sequel/prequel, which plays out almost like a reimagining of his original 1979 sci-fi horror classic. It's uneven, but entertainingly scary.

A bit further afield, the British-made drama Interlude in Prague focusses on some lusty intrigue for Mozart as he wrote Don Giovanni. It's very nicely shot on location, and the story is involving if a bit dry. Spark is a lively animated adventure with an all-star voice cast, but the animation isn't quite up to big studio standards. Eric Stoltz makes his feature directing debut with Confessions of a Teenage Jesus Jerk, a sharply observed comedy-drama that tackles some big themes (religion! sex!) without flinching. And Tomcat starts out as a gentle relationship drama before morphing into something dark and boldly disturbing, which is perhaps unsurprising since it's an Austrian film.

Blockbusters begin arriving over the next week, including the Baywatch movie, Guy Ritchie's King Arthur: Legend of the Sword and the Schumer-Hawn adventure Snatched, plus the acclaimed Chinese drama I Am Not Madame Bovary and the documentary Machines.
Posted by Rich Cline at 12:54 No comments:

It's a third short week this spring here in Britain, so there have been fewer than usual screenings. But I did manage to catch up with Colossal, the genre-defying movie starring Anne Hathaway and Jason Sudeikis. It's funny, scary, harrowing and very well-made. And then there was Sleepless, an almost painfully predictable cop thriller livened up by an adept cast that includes Jamie Foxx, Michelle Monaghan, Dermot Mulroney and Scoot McNairy.

A hybrid crime thriller and arthouse drama, Away is a small British drama starring Timothy Spall and Juno Temple as two desperate people who meet in Blackpool. It's nicely shot and acted, but jarringly edited. And Last Men in Aleppo is the prize-winning documentary about the White Helmets, rescue workers in war-torn Syria. Skilfully shot on the ground during the fighting, it's utterly devastating to watch, and urgently important.

Screenings coming up this week include Ridley Scott's Prometheus sequel Alien: Covenant, the comedy The Big Sick, the action movie Stratton, the road movie Folk Hero & Funny Guy, the period drama Interlude in Prague and the animated adventure Spark.
Posted by Rich Cline at 23:21 No comments: