The 32nd London Critics' Circle Film Awards were held Thursday night at BFI Southbank with a flurry of starry glamour. As secretary of the Critics' Circle Film Section, I've been heavily involved in planning this event, running the voting procedure for our members and organising a sometimes bewildering array of details for the big night - from liaising with stars and agents to making sure the trophies were engraved and delivered on time.
It all kicked off with a lively red carpet lined with fans and press - some of our nominees took nearly an hour to make their way through the gauntlet, but then that's why they were here! A few pics: Michael Fassbender signs autographs, above. And below are a few stylish nominees: Fassbender again, posing with his Shame costar Carey Mulligan; Submarine's Yasmin Paige and Craig Roberts; War Horse's Jeremy Irvine; Dreams of a Life's Zawe Ashton and director Carol Morley; and Attack the Block's John Boyega.

Aside from overseeing our @londoncritics Twitter feed volunteer and any urgent troubleshooting, my main role on the night was to welcome the nominees, celebrities, critics, sponsors and guests into the party - a great job as it meant that I got to chat to everyone as they came in. The pre-ceremony reception lasted just over an hour, and we were ushered into the theatre for the awards, which were again hosted by the critics' charming chairman Jason Solomons. 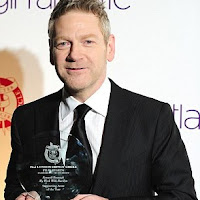 First up was Supporting Actor, which went to Kenneth Branagh (My Week With Marilyn), who gave a terrific thank you before racing off to tape this week's Graham Norton Show in the TV studio just down the road. Supporting Actress went to Sareh Bayat (A Separation), and her award was accepted by the film's producer Negar Eskandarfar. 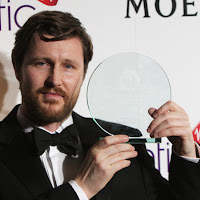 British Breakthrough Film-maker, sponsored by our main sponsor Virgin Atlantic, went to Andrew Haigh (Weekend). who was genuinely thrilled to win such a hotly contested prize. 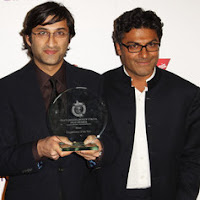 Next was a new award, Documentary of the Year, which went to Senna and was accepted by director Asif Kapadia and Manish Pandey, below left. 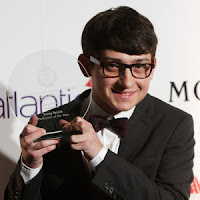 Young British Performer went to Craig Roberts (Submarine), another winner who was overwhelmed to take home the trophy. Screenwriter went to Asghar Farhadi (A Separation), who texted his acceptance speech from Iran, where he's already working on his next film. He had just returned home from his win at Sunday's Golden Globes! 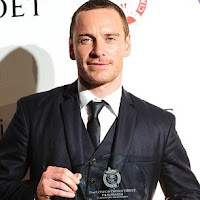 British Actor of the Year went to Michael Fassbender (Shame and A Dangerous Method), who bounded onto the stage and gave a lively thank you. 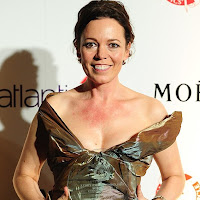 British Actress of the Year, sponsortd by our champagne sponsor Moet & Chandon, was Olivia Colman (Tyrannosaur and The Iron Lady), who wowed everyone with her gravity-defying Vivienne Westwood gown and gave perhaps the funniest and most generous speech of the night. Foreign-language Film added a third award to the tally for A Separation, and was again accepted by the good-natured Eskandarfar, whose husband Ali translated for her. Next up was a presentation of the BFI's Rescue the Hitchcock 9 appeal, which the event is held in aid of, and they had a real treat for us: a lively sequence from one of Hitchcock's restored silent films, The Lodger, accompanied live by pianist Stephen Horne. 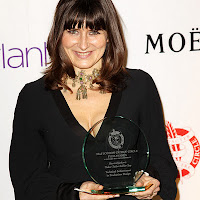 Then it was my turn to take the stage to present the Technical Achievement Award, sponsored by Sky 3D, to Maria Djurkovic (Tinker Tailor Soldier Spy) for production design. 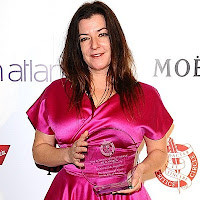 The Attenborough Award for British Film of the Year went to We Need to Talk About Kevin, and was accepted by director Lynne Ramsay (right) and producer Luc Roeg, whose father was in the house for a special award later on. Director of the Year went to Michel Hazanavicius (The Artist), who ended up with two awards - see below. 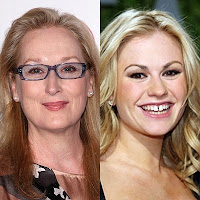 Actress of the Year was a tie, which has only happened once before with our awards, and the winners were Meryl Streep (The Iron Lady) and Anna Paquin (Margaret). Both delivered fantastic video acceptance speeches, mentioning each other and offering some terrific comments about the honour of the award. 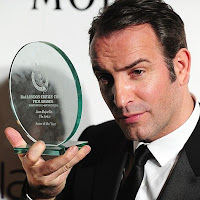 Actor of the Year was Jean Dujardin (The Artist) who charmed everyone with a warm and witty thank you. 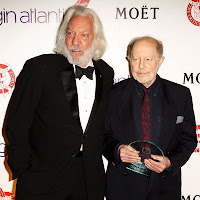 Then it was time for the Dilys Powell Award for Excellence in Cinema, and the surprise of the evening was the appearance of Donald Sutherland on stage to talk about his good friend Nicolas Roeg - a gorgeous introduction that was followed by a clip reel and then Roeg himself, looking a bit bemused that the critics were saying something nice about him for a change.

Finally, Film of the Year went to The Artist, again collected by a now extremely happy Hazanavicius and Dujardin. And then it was time to head into the after party. 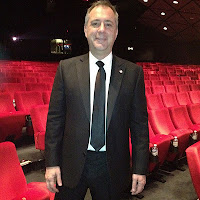 And here are a couple of photos of me at the event, first in my tux in the empty theatre before the event, and then snapped on a friend's phone with chairman/host Jason Solomons and Olivia Colman at the after party.

Now the awards committee will have a debrief and launch straight into planning next year's bigger and better event, which will be held in the 100th anniversary year of the Critics' Circle. 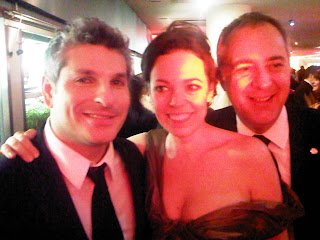