LFF: It is your destiny! 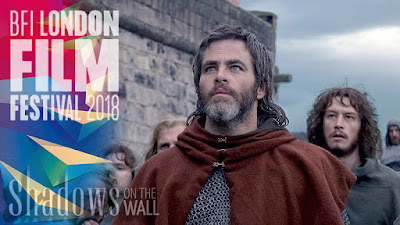 I'm finally back from my globe-hopping, and dove right back into press screenings for the 62nd London Film Festival, which has entered its final stretch now. My jet lag seems to be helping rather than sending me into a coma, thankfully. And I'm enjoying the buzz of the festival, if not the mammoth crowds of accredited journalists this year (which leads to vast queues for each screening). But it's great to be back in the swing of things - and to see those daily red carpets drawing crowds of fans in Leicester Square in the evening. Here are seven highlights from Tuesday and Wednesday...

Outlaw King
dir David Mackenzie; with Chris Pine, Florence Pugh 18/UK ***.
David Mackenzie brings the historical saga of Robert the Bruce to life with a sharp mix of introspective drama and epic-scale grandeur. This makes the film both darkly involving and gorgeous to look at, although the emotions are somewhat elusive and the narrative perspective never quite comes into focus. But the drama is strong, and the battles are enjoyably messy and grisly, even if they're also rather choppy.

Peterloo
dir-scr Mike Leigh; with Rory Kinnear, Maxine Peake 18/UK ***
Produced on a frankly awesome scale, this dramatisation of historical events from 1819 Britain wears out the audience with its endless speech-making, basing the narrative on ideas rather than a coherent sense of story. Each scene is fascinating, and it builds to a staggering climax, but the vast number of distinct characters and rambling structure leave it feeling somewhat dry. It's basically a spectacularly produced museum exhibition.

Suspiria
dir Luca Guadagnino; with Dakota Johnson, Tilda Swinton 18/It ***
Luca Guadagnino takes on Dario Argento's bonkers 1977 masterwork and spins it into a politically aware horror epic that's so over-serious that it often forces the viewer to stifle a giggle. It's also darkly creepy, and infused with a bizarre emotionality that never quite makes sense but registers almost subliminally. And the long running-time allows for a seriously extended bloodbath finale... FULL REVIEW >

Support the Girls
dir-scr Andrew Bujalski; with Regina Hall, Haley Lu Richardson 18/US ***.
Crisply well-written in a way that avoids the most obvious gags, this dramatic satire pokes fun at those American chains that require waitresses to dress in skimpy outfits and have no more more than one black waitress on duty per shift. While recounting a day in the life of a frazzled manager, writer-director Bujalski astutely observes the issues in a way that's quietly involving rather than madcap funny.

Birds of Passage [Pájaros de Verano]
dir Cristina Gallego, Ciro Guerra; with Carmina Martinez, Jose Acosta 18/Col ***.
Using real events and traditions from the Wayuu culture in northern Colombia, this involving drama tells a fascinating, deeply human tale about an escalating cycle of revenge. But there's added meaning since what happens is fuelled by a combination of isolationism and colonial invasion. It's a striking film that remains earthy and honest even as it touches on magical realism.

After the Screaming Stops
dir Joe Pearlman, David Soutar; with Luke Goss, Matt Goss 18/UK BBC ***
Matt and Luke Goss turn out to be such great characters that it feels like their words in this biographical documentary have been written by a comedy genius. But no, this film uses archives and newly captured footage to trace their reunion as Bros for a concert in London 28 years after they famously split up. It's a fast, snappy movie, although it's also a bit squirm-inducing since the most riotously entertaining dialog is unintentionally funny.

Bisbee '17
dir Robert Greene; with Fernando Serrano, Becky Reyes 18/US ****
This chilling documentary features a town re-enacting the darkest chapter in its history 100 years later to the day. Filmmaker Robert Greene ambitiously overlays history in the present-day town, which has struggled with the horrific truth of these events. It's strikingly well shot and edited, and performed full-on by the townsfolk with an undercurrent of quiet contemplation... FULL REVIEW >

The only other films I've seen over the past 12 days have been on very, very long flights. This includes finally catching up with the horror adventure It (rather good fun) and the survival drama The Mountain Between Us (beautifully made, nicely acted, corny story), revisiting The Last Jedi (I still like it!) and catching two new releases: Operation Finale (a great story, somewhat clumsily told) and Disobedience (a messy story, brilliantly well acted). And I am just beginning to add press screenings into the diary for next week, including Beautiful Boy, Monsters and Men and Adrift in Soho.
Posted by Rich Cline at 20:34