TIFF: It's all about perspective 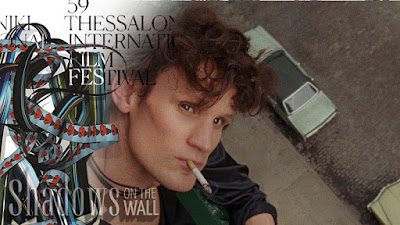 The 59th Thessaloniki International Film Festival is winding down to its final weekend, and I've now seen almost all of the 27 candidates for the international critics' (Fipresci) prizes here. Our jury will be meeting tomorrow to pick two winners - one from the competition and one to a first-time Greek filmmaker. I think I've seen more Greek films in this past week than in my entire career before I came here. And beyond the jury candidates, I am also catching up with festival films I've had my eye on as they have done the rounds this year, such as Ondi Timoner's excellent Robert Mapplethorpe biopic, which still doesn't have a distributor anywhere. Here's another update on what I've been watching...

Mapplethorpe
dir-scr Ondi Timoner; with Matt Smith, Marianne Rendon 18/US ****
Writer-director Onti Timoner spent more than a decade getting this biopic made, and her attention to detail shows. This is a strikingly told story, skilfully capturing the style of the period as it recounts the life of iconic photographic artist Robert Mapplethorpe. And Matt Smith gives a strikingly loose, authentic performance as a man who, instead of adapting for the mainstream, brought the fringe right out into the spotlight, finding beauty in every corner of his life.

The Harvesters [Die Stropers]
dir-scr Etienne Kallos; with Brent Vermeulen, Alex van Dyk 18/SA ***.
Evocative but elusive, this South African drama is a remarkable exploration of a subculture that is feeling threatened by societal shifts. It’s also an up-close character study, looking at two strikingly different teens dealing with their identities within a tight family. Filmmaker Etienne Kallos beautifully captures the undercurrents between the people in this strikingly beautiful place. But the implied deeper thoughts and feelings remain stubbornly undefined.

Meili
dir Zhou Zhou; scr Chi Yun, Zhou Zhou; with Chi Yun, Zhou Meiyan 18/Chn ***
A tough journey, this Chinese drama follows a young woman who faces a series of difficult setbacks that are made worse by her decisions and reactions. It’s a strikingly naturalistic film, directed with doc-like intensity by filmmaker Zhou Zhou. But the abrasive nature of the title character leaves the film fascinating rather than involving. We root for her, but don’t like her very much.

Pause
dir-scr Tonia Mishiali; with Stella Fyrogeni, Andreas Vasiliou 18/Gr ***.
There's a tricky perspective to this Greek drama that adds a layer both of black comedy and dark emotion. Writer-director Tonia Mishiali cleverly blues the lines between reality and fantasy, but makes sure that the status of women in this society is presented with a fiery honesty. This is a story about a middle-aged woman who finally gets fed up with being demeaned by her boorish jerk of a husband. The question is if she's only fantasising about getting rid of him or making a plan.
8.Nov.18

The Right Pocket of the Robe
dir Yiannis Lapatas; scr Stella Vasilantonaki; with Thodoris Antoniadis, Gerasimos Skiadaresis 18/Gr ***.
A drama about the last, lonely monk at an isolated monastery doesn't sound like much fun. And indeed it's very slow, somewhat clumsily made and weighed down by an incessant voiceover. But as a story about a man and his dog, working out a plan for a changing future, it has a surprising amount of charm. And also some resonant insight that helps us identify with this likeable, well-played protagonist as he spins his entertaining little tales.
8.Nov.18

Her Job
dir Nikos Labot; scr Katerina Kleitsioti, Nikos Labot; with Marisha Triantafyllidou, Dimitris Imellos 18/Gr ***
Nicely directed and played, this  drama takes on the singular perspective of a provincial Greek women who has been suppressed her whole life by the system. But now that she needs to support her family, she finds untapped resolve to stand up for herself. The script is somewhat underwritten, never quite tackling the characters or situations in much depth, but the feelings resonate strongly, especially as the protagonist takes on misogyny and cold-hearted capitalism.
8.Nov.18

Still River
dir Angelos Frantzis; scr Angelos Frantzis, Spyros Kribalis; with Katia Goulioni, Andreas Konstantinou 18/Gr *.
Set in a mythical part of Russia where the snow stays on the ground for nine months but everyone frets about an overflowing river contaminating the drinking water, this Latvia-shot Greek film layers a marital drama with a gloom-laden mystery and religious wierdness to absolutely no effect. Overlong and indulgent, it's clear that filmmaker Angelos Frantzis has a lot on his mind, but he struggles to convey it in a way that might gross over to cinema audiences. This leaves the characters deeply unsympathetic and the film wildly melodramatic.