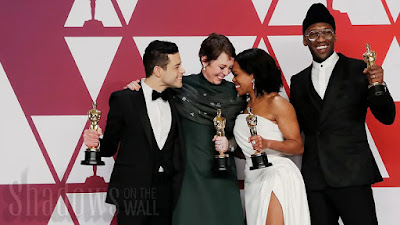 Well, the 91st Academy Awards threw a few surprises at us on Sunday, handing out Oscars to popular movies like Green Book, Bohemian Rhapsody and Black Panther while only offering the occasional nod at more ambitious, artistic films. I'm not disparaging the winners, although I would argue that all three are badly compromised projects, but as usual there was far better work in other nominated (and non-nominated) films last year. The show clipped along without a host, offering a few great moments for the award presenters and winners. Amy Poehler, Tina Fey and Maya Rudolph did a superb pastiche of an opening monolog. Spike Lee was triumphant and outspoken in a way few winners dare to be. Bradley Cooper and Lady Gaga recreated their intimate chemistry on-stage in a show-stoppingly cool single-take performance. The askance presenters (A-list outsider fans like Serena Williams and Trevor Noah) were a nice touch. And Olivia Colman stole the show with her heartfelt and very funny thank you speech - one of the best in Oscar history. 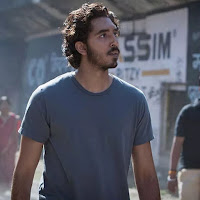 I've attended one press screening while I've been in Los Angeles, for Michael Winterbottom's dramatic thriller The Wedding Guest. It's a slow-burn starring Dev Patel and Radhika Apte, with a script that gives very little in the way of character or plot detail. But it's involving, and it's nice to see Patel in a shifty role for a change - he's terrific even if his role is underdefined. I also caught up with last summer's action comedy Tag, starring Ed Helms, Jon Hamm and Jeremy Renner, which isn't fine art but is funny and enjoyable for what it is.

Heading back to London, I have a few screenings in the diary, including Brie Larson's entry into the Marvel universe as Captain Marvel, Dean Cain in the fantasy satire 2050, the Icelandic comedy Woman at War, the indie thriller Devil's Path, and the short film compilation Boys on Film 19: No Ordinary Boy.
Posted by Rich Cline at 17:01