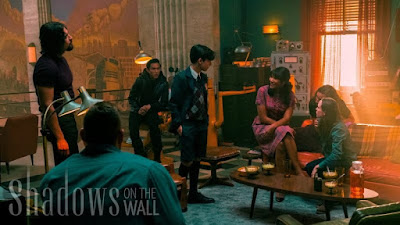 As the lines blur between how we watch television and the movies, I continue to use series to break up my feature film watching. Here's what I watched over the past month or so...

The Umbrella Academy: series 2
Kicking off with that same slightly out-of-control tone, this show's second season has almost the exact same plot as the first one did. This time, the siblings have found themselves trapped in 1963 Dallas just before JFK's assassination. But the real problem is another impending apocalypse, and once again they need to learn how to work together and get over their daddy issues. The cast is terrific as ever (Robert Sheehan is still insufferable, Aidan Gallagher still annoying), and the swirling mess of their interrelationships are far more intriguing than the overarching story. But the early-60s setting offers some issue-based humour and drama. And the final two episodes are spectacular. (Netflix)

I May Destroy You
Complex and challenging, this is a sometimes very bleak drama that plays out with a blast of fresh, authentic humour. It also occasionally feels almost too real to watch, and the scenes crash into each other to keep us on our toes. Actor-writer Michaela Coel is a serious talent, and she plays the central character Arabella so unapologetically that she's often difficult to like, even as we sympathise with her mental anguish after a sexual assault. It's a shattering performance with a lot to say about human connections. The script is sharp and astute, tackling the idea of consent with no holds barred, dropping in pungent references and mind-spinning twists. It's a rare show that refuses to put anything into an easy box. Essential. (BBC)

Snowpiercer
Set a decade before the events of Bong Joon Ho's now-iconic 2013 thriller, this series has a compelling throughline that holds the interest as it shifts from a murder mystery into a class-based revolution. Even so, the plot feels somewhat over-egged, trying a bit too hard to play up the allegorical layers of the premise, which makes the story feel far too dense and abrasive for its own good. But the show is boosted by a razor-sharp cast led by Daveed Diggs and Jennifer Connelly. It also looks terrific, with inventive sets and effects work. And each episode's twists and turns provide terrific wallops, adding layers to the social dynamics at work in the train, which of course are eerily recognisable. (Netflix)

Homecoming: series 2
Expanding on the first season, these seven tightly contained half-hour episodes cover just a few days in the lives of several characters, but they're seriously momentous. Janelle Monae, Hong Chau, Stephan James, Chris Cooper and the awesome Joan Cusack are excellent in complex roles as people coping with the fallout from experiments relating to an all-natural memory-erasing juice. The story starts, then circles back inventively before moving forward to a fiendish conclusion that has massive ramifications, leaving us with plenty to think about. It's finely written and directed, but it's the actors who make it a must-see. (Prime)

The Luminaries
Set in 19th century New Zealand, this show is far more demanding than it needs to be, swirling somewhat erratically between at least three timelines to recount a complex murder mystery. But paying attention pays off, as the characters develop unexpected depth along the way, leading to a fiendishly intelligent conclusion that solves the case with a wink and a nudge. It's also superbly well-played by a cast that includes Eve Hewson, Himesh Patel, Eva Green, Marton Czokas and Ewen Leslie. And in addition to the pitch-black drama and gloriously picturesque settings, the show is packed with pointed observations about imperialism that are still relevant today. (BBC)

Life Is Easy
From New Zealand, this short-form sitcom follows two best friends from school as they navigate young adulthood with a body-swapping twist. It's fast, sexy and enjoyably silly, even if the snappy pacing and multi-screen editing make it tricky to get a grip on it. But scenes are packed with knowing wit as best pals Jamie-Li and Curtis (Chye-Ling Huang and Cole Jenkins) discover themselves in each others' bodies during an eclipse. Since this is a straight woman and gay man, the show is able to explore all kinds of gender and sexuality issues through wacky comedy, including body image, homophobia, racial issues and various kinds of sexual harassment. Which adds a point to the nuttiness. (Revry)

Brave New World
This series drastically simplifies Aldous Huxley's iconic novel. For example, the gender roles, clothing and styling are far more 20th century than 25th, when it's set. (They're wildly misogynistic even by today's standards.) Basically, the writers have taken the concept and created a cool-looking series that pretends to be edgy and sexy, but isn't at all. The unambitious writing is moralistic and almost childish, sidelining any salient ideas about social engineering or control. At least the cast is excellent, led by Jessica Brown Findlay, Alden Ehrenreich and Harry Lloyd, with added Demi Moore. Each provides just enough nuance to their characters to keep us watching. But it's a missed opportunity. (Peacock)

Down to Earth
Zac Efron gallivants around the globe exploring important issues and trying out local food with vegan friend Darin Olien, who can't eat any of it. The main focus is on environmental themes, particularly sustainability, which is somewhat simplified for American audiences, but that's not necessarily a bad thing. Efron has a nicely unpolished charm as a host, genuinely enthusiastic about what he's discovering, and he has terrific camaraderie with Olien, the crew and everyone they meet along the way. Each episode is gorgeously shot in a spectacular place that's packed with mind-bending ideas and positive approaches to today's world problems, if only someone will listen. (Netflix)

The Plot Against America
Philip Roth's prescient 2004 novel describes an alternate autobiographical history as Charles Lindbergh becomes US president in 1941 and makes an deal with Hitler not to interfere in the European war. Which effectively roots antisemitism into US society. The show is sharply produced, with a solid cast (led by Zoe Kazan, Morgan Spector, Winona Ryder and John Turturro) playing a Jewish Newark family facing this shift in culture. The script is insightful if a bit flabby, padding out each hour-long episode with scenes that don't always feed into the larger story. But it's packed with present-day parallels, and chilling observations about American culture and politics. (HBO)

I Know This Much Is True
Tackling an important topic, filmmaker Derek Cianfrance takes an indulgent storytelling approach with this dark drama, demanding a lot of the audience. It's not easy to watch, as each scene spirals into shouty chaos, often for no apparent reason, and the narrative heaps misery on the characters. That said, Mark Ruffalo is on peak form as twin brothers, one a hothead and the other with schizophrenia, neither of them remotely sympathetic. And the supporting cast is excellent (Rosie O'Donnell is particularly good). But there's barely a moment of peace, as Cianfrance shoots impatient outbursts in gritty close-up. Still, there are undercurrents of raw emotion, and the final episode makes it worth sticking with it. (HBO)

The Witcher
This fantasy series has a fiendishly clever structure that doesn't resolve itself until the final episodes, when the actual timeline comes into focus. It's made up of three connective story strands that have properly epic moments dotted through them. Like Game of Thrones with a sense of humour about itself, it's packed with riveting situations and unusually complex characters, anchored by Henry Cavill in the title role (a deeper performance than it seems on the surface), Anya Chalotra as a rogue mage and Freya Allan as a portentous orphan. It takes the misstep of staging a climactic battle at night, but the show is wonderfully entertaining. Bring on season 2. (Netflix)

UnReal: series 1-4
This show ran for four seasons, but I only just discovered it. It's the kind of premise I love, lifting the curtain on the backstage antics at a lusty reality dating show. The way these producers shamelessly manipulate contestants and each other is probably understated, so every single character is loathsome. The horrible things they do are gripping and blackly funny. Although the show digs into nasty melodrama rather than more entertaining cheesy antics, tipping a cynical nod at some big themes. It's also one of those American series that pretends to be sexy but is actually timid and prudish. (Prime)