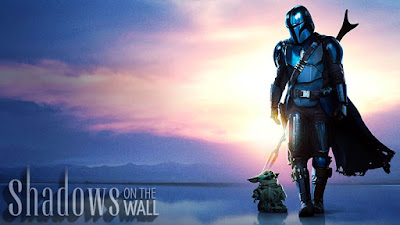 I'm not watching quite as much TV as usual, because it's awards screening season with films. But I've still managed to see quite a few series in between the movies over the past few months...

The Mandalorian: series 2
One of the finest series in production at the moment, creator Jon Favreau continues to tap into that childhood Star Wars vibe to create a mini-epic in each half-hour-ish episode. Cleverly, each plot is a misdirection, as Pedro Pascal's title character and his increasingly cheeky tiny sidekick are continually distracted by side adventures as they proceed on their epic quest. This means revisiting old characters, meeting new ones and dropping a steady stream of franchise references and witty discoveries into each scene. Every moment is simply gorgeous. (Disney)

His Dark Materials: series 2
Things get darker as this series continues, now heading into Phillip Pulman's second novel The Subtle Knife. The superb Dafne Keen is flexing her acting chops in the central role: Lyra is becoming a force to reckon with even as she digs deep inside herself. And joining her now, Amir Wilson makes a terrific partner/foil on this journey. The effects are still a bit overly digital, but they bring the fantastical elements to life in vivid ways. And the depth of character across the board makes it riveting, including a seriously complex villain in Ruth Wilson. (BBC)

Star Trek - Discovery: series 3
It's rare for a series to improve so enormously from season to season, but this show seems to revel in reinvention. This season's episodes were bracingly engaging, packed with epic action and full of big ideas. With inventive plotting and a flat-out terrific ensemble, it constantly surprises with its clever approaches to the themes that have made this franchise stand out since 1966. This season sent the crew ahead into a distant fragile future, where they're forced to confront their identities in some superbly well-imagined and played situations that have enormous ramifications. Where to next? (Netflix)

Fargo: series 4
It's not easy to get into this fourth season, which is set amid duelling gangs in 1950 Kansas City. The racial issues are complex, and of course the production design and eclectic casting is a lot of fun, led by the excellent Chris Rock and Jessie Buckley, both miscast. But it feels oddly indulgent, especially with its churningly violent overtones. While the fatalistic touches are still everywhere, the offhanded small-town charm of the first three seasons (and the Coens' film) is sorely missed. Creator Noah Hawley's approach is ambitious and intriguing, but this season is never engaging. (FX)

Bridgerton
Sharply well written and played, and produced with a modern Jane Austen vibe, this juicy Regency soap is ludicrously entertaining. It centres on two families on the London social scene, each with different fortunes during the matchmaking season. At the centre is the tangled romcom-like journey of Daphne and Simon (Phoebe Dynevor and Rege-Jean Page), who overcome toxicity with forgiveness and an open heart (at least until season 2). And the other vivid characters have entertaining journeys of their own, amid fabulous sets and costumes that never overwhelm them. The dialog bristles with wit, and it's a rare show that's genuinely sexy too. (Netflix)

The Serpent
A riveting true story, beautifully produced with a great cast, this series traces the nasty story of Charles Sobhraj (Tahar Rahim), who robbed, drugged and killed travellers across Southeast Asia in the mid-70s, and Dutch diplomat Herman Knippenberg (Billy Howle), who went far beyond his job to catch him. The period and atmosphere are so beautifully evoked that we can forgive the obvious directorial touches and jarringly choppy editing (two weeks later, three years earlier, seven months later, huh?). And the actors are so strong that we're pulled right into each incredible twist and turn in the tale. (BBC)

The Undoing
There's a fairly straightforward mystery at the centre of this stylish series, but it's elevated by the astonishing casting of Nicole Kidman, Hugh Grant and Donald Sutherland, each of whom plays someone who's slippery and suspicious, but probably not the killer. Add the always excellent Noah Jupe as the teen in the middle, a great role that should have been even bigger. It's all so twisty and vicious, with so many bombshells that it's hard to wait for the next episode. And it's so juicy that we really don't mind where it might end up. The journey is the thing. (HBO)

The Flight Attendant
There's a trashy energy to this series that makes it watchable, even though the storytelling isn't particularly strong. The main problem is that the central character (played full-on by Kaley Cuoco) is relentlessly unlikeable: not only is she a raging alcoholic, but she has serious impulse-control issues. This makes everything that happens feel both implausible and annoying. The actors are solid, creating intriguing characters, most notably Michel Huisman, who makes what could have been a thankless role into someone genuinely fascinating. But all the whizzy, slick production values in the world can't make up for the essentially flimsy plot. (HBO)

Next
John Slattery is terrific as a scrappy tech billionaire in this slick, convoluted thriller about an AI programme that runs amok and starts murdering and manipulating. This allows for a series of set-pieces that play out with witty and very nasty details. And it's just believable enough to be darkly chilling as things get increasingly freaky, carefully layering in the possible future with the realistic present. The relentless violence is perhaps more human than machine, but it plays nicely into the audience's fear of too-smart technology. And the ramifications the story raises will keep our minds spinning. (Fox)

Black Narcissus
There's a wonderfully leery tone to this melodramatic series, based on the 1939 novel (previously adapted into a 1947 Powell & Pressburger film). Gemma Arterton is superb as Sister Clodagh, the young nun sent to the high Himalayas to start a convent with four colleagues. Her innuendo-fuelled clashes with the roguish Mr Dean (Alessandro Nivola) add some subdued spice, as do her clashes with mentally unstable Sister Ruth (Aisling Franciosi). It's all rather overwrought and ridiculous, which is of course what makes it compelling and entertaining, especially when things get vaguely sexy and hauntingly freaky. (BBC)

Death to 2020
This mock-doc looking back at the last 12 months really should have been a lot more original than this with Charlie Brooker's name attached. But it's a rather simplistic rehash of the year's various nightmares, peppered with lazy jokes and flippant commentary, as if everything will go back to normal at the stroke of midnight on December 31st. Appearances from Hugh Grant, Lisa Kudrow, Kumail Nanjiani, Leslie Jones and especially Samuel L Jackson add interest. But while they make it watchable, they're only able to inject a few meaningful observations. (Netflix)

This Is Us: series 5
Open-handed emotions continue to guide this family series, which is still bouncing around in an ever-expanding timeline to catch the characters at various ages, sometimes straining to draw parallels between their reactions and experiences. The cast has settled into their second skins now, making these people feel like part of our own family, so every emotional wrench is strongly felt. I'm not crying, you are. (NBC)

Superstore: series 6
Covid invaded this sitcom in a major way, and the writers have had a lot of fun with it, allowing viewers to laugh at the absurdities without dwelling too much on the annoying/boring aspects of lockdown. The cast continues to have fun playing these idiots as they work in their enormous warehouse shop, although sending America Ferrara off to California in the season's early episodes feels like a misstep. (NBC)

Mom: series 8
The title is now pointless, as this show deleted one mom/daughter from the first season and has now lost another one. Instead, it has become a rehab sitcom starring Allison Janney. And I'm not complaining. It's still sharp and funny, tinged with real-life issues and packed with wacky characters who manage to keep their feet on the ground. Janney and William Fichtner's relationship continues to find sparky wrinkles, and it's still refreshing to see recovering addicts for whom putting their lives back together isn't accomplished in one episode. (CBS)

Shameless: series 11
For their final season, the Gallagher family are clearly intending to go out in a blaze of glory. This series starts with them in very different places as parents, spouses and entrepreneurs, which continues their journeys with additional textures and complications. There's the usual worry that the writers will continue to pull the rug out from under these people we've grown to love. But it will be fun to see where they all end up. (Showtime)

Email ThisBlogThis!Share to TwitterShare to FacebookShare to Pinterest
Labels: bridgerton, discovery, his dark materials, shameless, the mandalorian, the serpent, the undoing, this is us