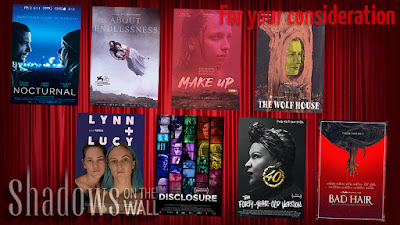 With Bafta and Oscar pushed into April, this year's awards season has nearly been doubled, with the various honours I vote in stretched a couple of months longer than usual. It also means that not all awards have the same eligibility dates, so winners are beginning to vary as nominations are announced and prizes are handed out. So we can expect to see some of this year's Oscar contenders among next year's critics accolades. Here are eight more films I've caught up with over the past two months for voting purposes, including some proper gems...

Nocturnal
dir Nathalie Biancheri; scr Olivia Waring, Nathalie Biancheri; with Cosmo Jarvis, Lauren Coe, Sadie Frost, Yasmin Monet Prince, Laurie Kynaston, Amber Jean Rowan 19/UK 1h24 ***
Shot and edited with a visceral sensibility, this British drama explores the unusual friendship between sparky 17-year-old Laurie (Coe), who bristles with attitude, and the 33-year-old Pete (Jarvis), who seems to be obsessed with her. Director Biancheri keeps the tone almost unnervingly over-serious, with improv-style dialog that's often mumbly or whispered. The way Pete approaches Laurie is more like a big brother, which confuses her as she continues flirting with him. Of course, all of this is meant to imply that there's more going on here than meets the eye, which is rather indulgent. And indeed, the plot is a bit thin. But the actors are so earthy and natural that the film becomes almost mesmerising. and they keep it authentic and emotionally powerful.

About Endlessness
[Om det Oändliga]
dir-scr Roy Andersson; with Jessica Louthander, Tatiana Delaunay, Anders Hellstrom, Anna Sedunova, Jan-Eje Ferling, Thore Flygel 19/Sweden 1h18 ****
At age 78, Swedish filmmaker Roy Andersson continues to create visually astounding work that explores enormous themes from witty, askance angles. Each shot is like a slowly moving painting, exquisitely detailed and rendered with astonishing attention to detail. This makes watching the film almost hypnotic, as each scene presents a story that weaves into a larger exploration of human existence and interaction. This film is a remarkable depiction of life in all its forms, wonderful and terrible, meaningful and pointless, beautiful and ugly. The settings have a muted old-world charm, while the people are strikingly modern. And each scene is utterly exquisite, so the film holds the attention even without any proper characters. It's a stunning exploration of the meaning of existence, and a witty observation that we don't actually need to know what it means.

The Wolf House
[La Casa Lobo]
dir Cristobal Leon, Joaquin Cocina; scr Alejandra Moffat, Joaquin Cocina, Cristobal Leon; voices Amalia Kassai, Rainer Krausse 18/Chile 1h15 ***.
A truly original approach to animation makes this surreal movie magical to watch, mixing a variety of filmmaking formats. It's fairly impossible to describe, as the story emerges through what looks like moving images hand painted onto walls, which then combine into a range of inventive stop-motion puppetry techniques. And the story is involving and haunting, twisting fairy tale elements in strange new ways. Set in southern Chile, it opens within a community of singing Germans who believe they have discovered the right way to live, although they have a rather dark past. Maria (Kassai) is a young member who, rather than endure punishment after letting two pigs escape, sneaks out of the village and takes refuge in a strange house in the woods. She avoids the wolf (Krausse) who lives there, reuniting with her lost pigs and becoming a family. But she knows the wolf is lurking. The swirl of constantly shifting painting, sculpture, papier mache and many other elements is simply stunning to look at, while the story seems to take place within Maria's mind as a stream-of-consciousness voiceover. The house itself becomes a character in the narrative, which takes outrageously Lynchian turns. But it's the imagery that's mesmerising. Indeed, it's impossible to look away. What big teeth you have....
24.Jan.21

Lynn + Lucy
dir-scr Fyzal Boulifa; with Roxanne Scrimshaw, Nichola Burley, Shaq B Grant, Tia Nelson, Jennifer Lee Moon, Kacey Ainsworth 19/UK BFI 1h27 ***.
In the tradition of British kitchen-sink realism, this downbeat drama centres on characters for whom life is a real struggle. This makes them easy to identify with, although first-time feature filmmaker Boulifa's approach is a bit relentlessly grim. The title characters have been friends since they were 11 and are now godmothers to each others' children. Lynn and Lucy (Scrimshaw and Burley) support each other through everything, including Lynn's struggles as a new mother and Lucy's strained marriage to Paul (Grant), a tough guy who is unable to work after his military service. Then something happens that requires unflinching support, and the questions shake their close bond. The film is beautifully observed, with conversations that take unexpected detours, delivering small but pungent kicks. And the plot contains some earth-rattling points that make everything even more intensely emotive. All of this is expertly written and directed, and played with a deep sensibility by the fine cast. And as it explores layers of tragedy in everyday life, it's not easy to watch.
19.Jan.21

Disclosure
dir Sam Feder; with Laverne Cox, Mj Rodriguez, Chaz Bono, Lilly Wachowski, Yance Ford, Jamie Clayton 20/US Netflix 1h48 ****
This strikingly well-made documentary takes a complex look at how transgendered people are depicted in the media, an enormous issue that becomes deeply personal in the thoughtful commentary. "I never thought that I would live in a world where trans people were treated with respect or even celebrated in culture," says one person who clings to trans characters in movies and TV shows, even when they're problematic or downright negative. Filmmaker Feder assembles this with starry to-camera interviews sharing intimate stories and feelings, intercut with a wide range of clips that span more than a century. Trans people have been played for laughs (Tootsie, Victor/Victoria), depicted as killers (Psycho, The Silence of the Lambs) or dismissed as a punchline (daytime chat shows). But there's also deep resonance (Boys Don't Cry), problematic casting (Dog Day Afternoon, Dallas Buyers Club) and unhelpful reactions (The Crying Game, Ace Ventura). But things are changing, especially for underrepresented groups (Orange Is the New Black, Pose, A Fantastic Woman). Using such bracingly personal perspectives keeps this from being another trawl through media history. Yes, the doc feels comprehensive, but that's what makes it so powerful. And it's packed with essential, eye-opening observations.
6.Feb.21

The Forty-Year-Old Version
dir-scr Radha Blank; with Radha Blank, Peter Kim, Oswin Benjamin, Imani Lewis, Haskiri Velazquez, Antonio Ortiz 20/US Netflix 2h03 ****
This is a dryly hilarious, knowing slice of life in which filmmaker Radha Blank plays a sparky version of herself, trying to get noticed as a 40-year-old Black female playwright and rapper. But everyone keeps brushing her off, and those who engage with her are painfully condescending, wanting her to do the usual nonsense ("I still need a writer for my Harriet Tubman musical"). And she also has to contend with the usual obstacles of chaotic New York life. But her terrific collection of snappy, colourful friends are there to help her ... and to entertain her. And she also has a class of teen theatre students who are bursting with attitude that keeps her on her toes. Where the story goes over the somewhat overlong running time is funny, powerful and occasionally excruciating. It's also skilfully shot in black and white, and peppered with brilliantly astute moments that are heart-stoppingly raw. Radha is a fresh new cinematic voice. And this film is loose, engaging and important.

Bad Hair
dir-scr Justin Simien; with Elle Lorraine, Vanessa Williams, Jay Pharoah, Lena Waithe, Blair Underwood, Laverne Cox 20/US 1h42 ***
There's a subversive edge to this comical horror about a killer weave, which grounds its amusingly unsettling Faustian story in a world full of racial and sexist harassment. This connection to current issues adds a zing of topicality to the nastiness that unfolds, even when the plot goes off the rails. The story is set in 1989 Los Angeles, where Anna (Elle Lorraine) gets pricey sewn-in extensions to advance her career. But as her confidence grows, she realises that her new hair has an appetite for blood. Director Simien indulges in flashy camerawork, wacky effects and colourful production design, creating arch moments that punch the comedy and add several freak-out thrills. The hair salon sequence is properly nasty, as are the references to slave-era folktales. The violent moments have seriously grisly angles that add deeper meaning to the film, touching on a range of weighty topics. So it's a bit frustrating that gonzo grisliness takes over in the uneven final act. At least the message is perfect: a woman should be able to wear her hair however she wants to.