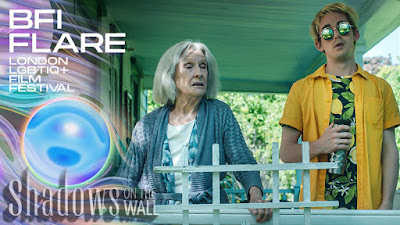 The 35th edition of the British Film Institute's Flare: London LGBTIQ+ Film Festival kicked off tonight virtually, for the second year in a row. I've been covering this festivals for more than 20 years, and it's a shame that once again there aren't all those lively nightly parties and events - it's something worth looking forward to every year. Thankfully, there's still a terrific collection if very strong films - all to be watched at home alone without that wonderful communal buzz at BFI Southbank. Next year it should be wilder than usual. Here are a few highlights to kick us off...

Jump, Darling
dir-scr Phil Connell; with Cloris Leachman, Thomas Duplessie 20/Can ****.
This comedy-drama centres on a luminous, no-nonsense performance from the late Cloris Leachman, a lead role that feels like a gift. Writer-director Phil Connell tells an engaging story about people who find inspiration at opposite ends of their lives. While invoking the spirit of Hedwig as these defiant people refuse to be put into boxes, this is a complex celebration of how empowering it is to be honest with yourself.

Firebird
dir Peeter Rebane; with Tom Prior, Oleg Zagorodnii 21/Est ****
Based on a true story, this Cold War drama traces a romantic triangle in a Russian military setting. Director Peeter Rebane keeps the focus on the characters as they navigate a perilous situation, pulling the audience into the story. This adds vivid personal emotions to the visually stylised filmmaking, and also adds wider resonance. Some earthy grit might have helped, but the film is strongly engaging and very moving.

The Greenhouse
dir-scr Thomas Wilson-White; with Jane Watt, Camilla Ah Kin 21/Aus ***
While this Australian drama takes a complex dive into grief, the earthy characters add strong resonance in a story that spirals into surrealism. Writer-director Thomas Wilson-White taps into visceral emotional responses, which sometimes makes the film feel over-serious and mopey. But he tempers this with real-life humour and everyday family dynamics. So the events get under the skin, reflecting ourselves and our relationships in unusual ways.

Enfant Terrible
dir Oskar Roehler; with Oliver Masucci, Hary Prinz 20/Ger ***
This biopic of live-fast-die-young filmmaker Rainer Werner Fassbinder takes an in-your-face kaleidoscope approach, using heavily stylised scenes that centre on relationships rather than his work. Playing out like a series of disconnected stage sketches, it isn't always easy to watch. But it tells a remarkably intense story about an artist who never quite got to grips with his personal demons, while still leaving an indelible imprint the world.

Note that all full reviews will be linked on the site's BFI FLARE page.

Non-festival films this week included the long-shelved City of Lies, a riveting true crime drama starring Johnny Depp and Forest Whitaker; the lively and inventive ode to The Smiths in Shoplifters of the World; the only sporadically funny prankster comedy Bad Trip; the terrific Greek road romance The Man With the Answers; and another terrific collection of masculine shorts with The Male Gaze: Nocturnal Instincts. This coming week, I have some mainstream releases to catch up with alongside BFI Flare movies, including Jeremy Piven in Last Call, Sarah Sutherland in Like a House on Fire, and the award-winning Albanian drama Zana.