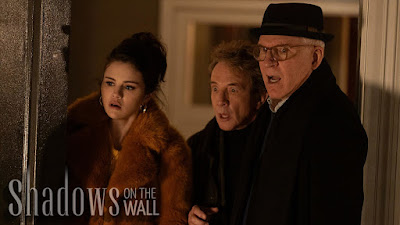 There's been a lot on television to distract me from work over the past few months, and as always I particularly enjoy mindless fun to reset my brain in between serious movies. Obviously, I can't watch everything, and I do tend to avoid gritty police/hospital dramas in lieu of shows that keep me smiling. Although occasionally I like to be challenged on the small screen, I usually leave that for the big one...

Only Murders in the Building
Smart and witty, this comedy-mystery series reteams dynamic duo Steve Martin and Martin Short, plus Selena Gomez, as murder podcast obsessed neighbours who team up for some amateur sleuthing when someone is killed in their apartment block. While the pacing is quaint and silly, there are deranged twists galore. Martin and Gomez play their characters with a straight face, leaving Short to expertly steal every scene. While starry guests (Nathan Lane, Jane Lynch, Amy Ryan, Sting) provide plenty of pizzazz as the mystery unfolds. And the final moments are either a massive cliffhanger or a teaser for the second season. (Hulu)

Timing wasn't kind to this series, which came out too close to The White Lotus, a more astute, grounded drama set in a resort. But this show is worth a look, with its adept cast including Nicole Kidman, Melissa McCarthy, Michael Shannon, Manny Jacinto. It's set at a wellness retreat with guests who have been mysteriously curated by the owner (Kidman), who experiments with microdosing acid to push psychological buttons. It's slightly over-constructed, which makes things far less surprising than they should be, but the general nuttiness of the story holds the interest, as the actors bring offbeat layers to each character. (Prime)

Drawing on the nostalgic comedy traditions of shows like The Wonder Years or Young Rock, this lively comedy-drama features Eugenio Derbez reminiscing about his time as a chirpy teen (Enrique Arrizon) working in a fancy resort in the Mexican seaside town. Each of his adventures has a little moral message, which feels a bit pushy, as does the way the script somewhat simplistically depicts rich people exploiting locals who in turn are conning them. But the show's flamingo-coloured approach is thoroughly charming, and the cast is fresh and likeable, hinting at all kinds of secrets and revelations that are still to come. The bilingual approach is also superb. (Apple)

A lively drama set around a dance-based reality show, this series features terrific characters in a tangled mess of over-egged soap-style storylines as a group of wannabe dancers try to stage a new production of Swan Lake. It's concocted and safe, including the romances, dark dramas and sassy challenges involving both the dancers and the crew members. But the actors are solid, anchored by Scott Foley as the semi-ruthless show-runner. Each of the interlinked plot threads is deeply silly, the kind of mindless nonsense that's perfect for escapist television, which the script knowingly acknowledges. And the dancing is strikingly good, especially Raymond Cham Jr's spinning, popping Justin. (Fox)

Yet another series that kicks off with a bunch of random, disconnected scenes, characters who mean nothing to the audience and forced suspense based only on the musical score. It looks great, and the excellent international cast manages to draw out some interest in a wide range of people facing a mysterious worldwide alien invasion. But the lazy, indulgent writing and directing make no attempt to pull a viewer in, allowing the story to unfold in out-of-sequence flashbacks that are both repetitive and inadequate. Even the random moments of insight are simplistic. I only barely resisted giving up. Set up for season 2, I doubt I'll return for more. (Apple)

An inventive mix of comedy, drama and satire, this show centres on the terrific Joseph Gordon-Levitt as a fifth grade teacher who is feeling squeezed in by his day-to-day life, something very easy to identify with. Gordon-Levitt (who also writes and directs) is so likeable that he makes the title character deeply sympathetic even when he makes terrible decisions. The episodes are hugely uneven, spinning off into unexpected and sometimes indulgent directions that include long sideroads, fantasies and some darkly provocative twists. It's tricky to engage with it as a series, but it maintains a nicely provocative tone. I almost gave up, but stuck with it to the end. (Apple) 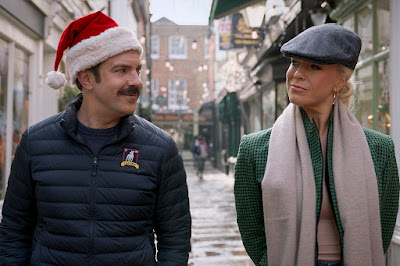 Ted Lasso: series 2
Instead of repeating the breezy comedy of the first season, Jason Sudeikis goes deeper with his now-iconic American football coach in London, pushing him with a team psychologist (Sarah Niles), unexpected conflicts and corporate issues, plus the slow transformation of his protege (the brilliant Nick Mohammed) into a supervillain. And in most of these areas, his down-home aphorisms don't quite have the intended effect. This season has featured a few inventively themed episodes, but instead of being gimmicky they've maintained the same open-handed but earthy emotionality that pushes the story and characters further and further. It's a rare show that manages to balance realism and optimism. (Apple)

Going even darker, this drama starts exactly where the first season ended, with everyone in chaos following the revelations of harassment at a big network. Then it cuts to January 2020, as the breakfast TV show's cast and crew are blithely unaware of what sporadic reports about a virus in China might mean. This adds an underlying tension to everything, as do the chaotic US presidential primaries and the increasing melodrama between characters finely played by Reese Witherspoon, Jennifer Aniston and Billy Crudup, with added Steve Coogan who's in hiding with Valeria Golino in Italy. Where it all goes is perhaps a bit too shocking. (Apple)

The Other Two: series 2

It's been two and a half years, but this superbly written and played comedy is finally back for a second season, and this time siblings Brooke and Cary (Helene Yorke and Drew Tarver) find themselves in the shadow of their talkshow host mum (Molly Shannon), in addition to their popstar little brother Chase (Case Walker). The comedy feels a lot broader this time around, which makes it sillier and perhaps less endearing. But the central theme is still strong, playing on how frustrating it can be to watch seemingly untalented people succeed while you struggle. And once again, the pop culture gags are continual and skilfully right on the nose. (HBO)

William Jackson Harper takes over the central role as this gently comical drama returns to follow another person's romantic rollercoaster journey. Opening with some bad decision-making that quickly leads to a divorce, Harper's Marcus is a likeable guy who struggles to get his life back on track. This includes some painfully awkward encounters, stressing out his friends and family and launching himself into a series of relationships. All of this happens while he's circling around the hugely likeable Mia (Jessica Williams), who is clearly too good for him, but we can't help but hope they work out their messiness. Harper is particularly terrific in a demanding role. (HBO)

Continuing without taking a breath from the last episode, this intense media family drama never gives the audience break from these intense people who circle around each other like sharks. Patriarch Logan (Brian Cox) is now in all-out war with his son Kendall (Jeremy Strong), with siblings Roman and Shiv (Kieran Culkin and Sarah Snook) vying for control and everyone else trying to cling to what little influence they may have. It's absolutely brutal, and riveting, to watch this family so aggressively engage in vicious power games. And the complexity of the roles gives each actor a lot to chew on along the way. Once again, the ending is a stunner. (HBO)

This show continues to broaden its scope by bringing more characters into the focal zone, and it works because all of them are fierce, strikingly well written and played individuals. The spiralling relationships between family, friends and lovers are thoroughly entertaining, even if the careful plotting makes it fairly clear where things are heading. And the sparky cast, led by Asa Butterfield and Gillian Anderson, is hugely engaging. With added Lola Kirke as the villainous new headmistress of the season. Even she is given a bit of perhaps uncharacteristic shading under her relentless nastiness. (Netflix)

What We Do in the Shadows: series 3

Things continue to ramp up in this season, as this household of four clueless vampires take the place of the council that was taken out by their vampire-hunting familiar Guillermo (Harvey Guillem), who continues to take care of them without them noticing. This adds a whole new angle to their relentless obliviousness, and each episode mines ridiculous situations for genuinely hilarious laughs. But even more important is how the writing and acting make us care about these idiots, especially as the final few episodes of this season change things so drastically. Any future episodes will feel very different indeed. (FX)

I was very late to this show, catching up with the first seven seasons during lockdown, and I enjoyed these final 10 shows as they appeared two per week. This is the kind of comedy I love, with nutty character-based humour that simply never pauses to let the audience catch their breath. It's silly, sharp and even has some political resonance, and the jagged relationships between these police precinct colleagues add engaging angles to the jokes. A few characters feel a little muted by time, but each of them has the power to surprise us. And the show's anchors Andy Samberg, Andre Braugher and Terry Crews are fabulous. (CBS)

I GAVE UP: Foundation (Apple) was just too dense and choppy for me.

COMING SOON: The Woman in the House Across the Street From the Girl in the Window, The Book of Boba Fett, Pam & Tommy, Euphoria (2), Killing Eve (4).