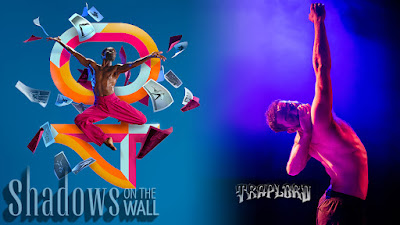 Sadler's Wells presents two shows concurrently, 40 Years of Phoenix at the Peacock and Traplord at 180 Studios, both of which explore issues of identity through a distinctly Black perspective. These are unmissable performances that are worth seeking out...

With this anniversary show, Phoenix Dance Theatre celebrates the four decades since it launched in Leeds in 1981. Artistic Director Dane Hurst has selected five distinctive pieces from the company's history, which he calls "five essential works that display something of the scope and reach of what dance can achieve". Indeed, these are dramatically involving performances, deploying terrifically talented dancers to provoke the audience physically, emotionally and also intellectually.

Signal
Choreographed by Henri Oguike, this rhythmic diptych is performed to Japanese Taiko percussion that reverberates right through the audience. It's an often startling mix of elegance and strength, blending balletic moves with properly intense physicality as the dancers, dressed in striking red and black body suits, interact in a variety of ways that feel deeply human. And the final section, performed with leaping flames on-stage, bursts with energy and intent.

Harmonica Breakdown
Created in 1938 by dancer-choreographer Jane Dudley, this piece plays out to the earthy rhythms of Sonny Terry's eponymous track, danced by Yuma Sylla as if her life depends on it. This is a bracing depiction of human endurance and resilience in the American South, as this woman continues surging forward despite a range of unseen barriers that restrict her progress. But she persists in moving, and she vividly expresses her determination, pain and joy in equal measure.

Family
There's a witty kick to this fascinating play on home life, choreographed by Danial Shapiro and Joanie Smith to give voice to a range of family members, including parents, children, an uncle, cousin and boyfriend fighting for his place in the holiday portrait. Centred around an armchair, the movement is clever and often exhilaratingly fluid, as dancers take flight in their interaction, pushing and pulling each other to draw out both humour and darker emotions.

Pave Up Paradise
An inventive, emotionally resonant take on the story of Adam and Eve choreographed by Ben Duke and Raquel Meseguer, this piece includes musician Andrew Burke on-stage performing music by the Strokes, Gomez and Jeff Buckley while two dancers spiral around the stage. It's a rare dance piece featuring lines of spoken text as the performers retrace the creation mythology with their voices and physicality, exploring the connection and tension between male and female perspectives.

Heart of Chaos
Choreographer Darshan Singh Bhuller's fiercely physical work has been revisited in the context of boxer Jack Johnson (played by Aaron Chaplin), his rivalry with Jim Jeffries (Matthew Topliss) and his tumultuous marriage to Etta Duryea (Melina Sofocleous). It's a breathtaking piece that includes riveting dance-based recreations of boxing matches as it grapples with complex ideas of race, masculinity, celebrity and sexuality. As in the other pieces, the dancers' work is staggeringly precise and evocative, here with an added punch of historical context and dramatic urgency. Simply stunning. 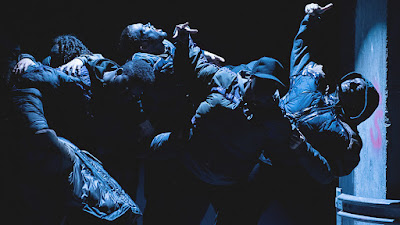 A staggering burst of pent-up energy, Ivan Michael Blackstock's atmospheric show digs deeply into concepts of masculinity while recounting an epic tale of redemption through a Black point of view. This is a provocative trip through resonant issues of identity and connection that vibrates the audience's bones, while performers bounce around the industrial theatre space with expressions that range from gun violence to heavenly bliss.

Dressed in combat gear with provocatively blacked-in faces, the performers emerge from the darkness with intent, deliberately evoking cliched masculine posturing in a show of strength before the deeper ideas begin to emerge between them. The show includes live music, spoken word and a giant screen that plays on videogame imagery to hint at the internal intensity of daily life for someone whose self-image is at risk if they don't continually level up, as it were. And of course the real quest here is to find the strength to accept and celebrate yourself.

There's an explosiveness to this performance that literally takes the breath away, both in large group scenes and several pointed individualistic moments. The physicality is astonishing, often seemingly loose and random before coalescing into bracing communal choreography. This combination expresses ideas that cut through tough surfaces that are pointedly abrasive, from the distorted sound mix to lights shining straight into the audience's eyes.

In the unstructured narrative, the sympathetic Blackstock appears in a rabbit-eared cap, often hiding from a hulking figure in a pig mask. And the astonishingly bendy Kanah Flex is another stand-out. The range of colliding ideas intentionally challenges the audience to feel this piece rather than to understand it. And while the climactic sequence involving a mythical sword and a crowd of angels feels a little low in energy, the show is capped off by a terrific blast of raw power. 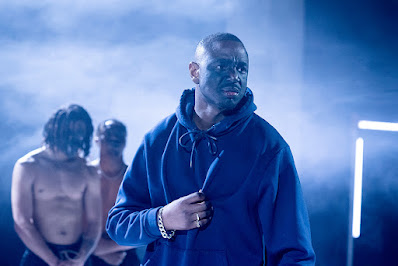