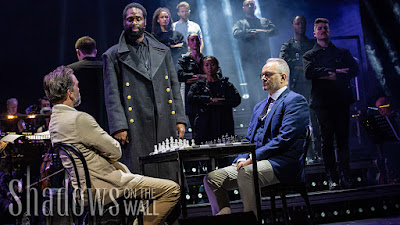 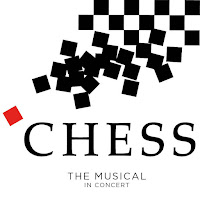 Originally staged in 1986, following the 1984 concept album, this musical has had a bumpy history as a Cold War romantic thriller that opened just as global politics were shifting dramatically. While it is packed with belting anthems (including one titled Anthem), it's an intricately plotted tale of chess players navigating a thorny political landscape with added forbidden love. And because it's almost entirely sung, the complex twists and turns are often lost in muffled lyrics. Still, it carries a proper emotional wallop, even in a concert staging like this one.

An enormous orchestra and choir fill the stage, while the action takes place on risers around and in front of them. It opens on Freddie (Harper-Jackson), a bad-boy American chess champion who is defending his title against the Russian master Anatoly (Fraser). The hotheaded Freddie has simmering flirtation with his second Florence (Barks), who is exasperated by his swaggering image. As a Hungarian, she finds some affinity with Anatoly, blossoming into a romance when he defects to the West. But he has a wife, Svetlana (McCann), and children back in Russia, and the powers that be are making underhanded deals to bring him back under Soviet control.

The show's first half features a string of huge numbers, performed at full-voice by Barks, Fraser and Harper-Jackson, plus Mitchell as the Arbiter and Els as Anatoly's second Molokov. Barks gets the two best songs, the furious Nobody's Side and plaintive Heaven Help My Heart, while Harper-Jackson registers beautifully with the soaring Pity the Child. But with everyone singing their heart out, there's no perspective to the show that might bring the audience into the story. We are merely observers of each person's separate journey, so it's difficult to get very deeply involved.

Things get more textured in the second act, shifting from Harper-Jackson's riveting One Night in Bangkok to the show-stopping duet I Know Him So Well, gorgeously rendered by Barks and McCann. Each performer is on top of his or her game, creating vivid moments even if the show never coalesces into a compelling narrative. So it seems confusing that Florence emerges as the protagonist, simply due to Barks' powerhouse emotive presence. Costumes and lighting make clever use of colour, although the staging further blurs the focus with far-too-busy background dance choreography and persistent video projections that seem overly pointed and a bit random.

It's great to see this show on a big stage like the Theatre Royal Drury Lane, mainly because the songs are so triumphant and passionate. But even as a first-rate concert production, there could have been more nuance in the sound mix and choreography. And while the show's lack of a point of view will always be a thorny problem, attempts to restage it and perhaps make it more engaging will always be welcome.
See also:
Kinky Boots - The Musical in Concert (8-9.Aug.22)
Treason - The Musical in Concert (22-23.Aug.22)
For information, visit THEATRE ROYAL DRURY LANE >
photos by Mark Senior • 1.Aug.22
Posted by Rich Cline at 12:23