A visit to Twin Peaks

Extended until 21st November, The Owls Are Not What They Seem is a Twin Peaks fan experience in Central London that plays on the 25-year-old TV series' now iconic imagery and characters. It's interactive and immersive, with a terrific cast of characters and a range of food and drink inspired by the show. 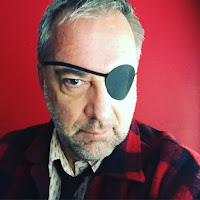 On arrival, you're given an identity. I had come as my Twin Peaks alter-ego One-eyed Jack, and there I was told I was a "self-medicating divorcee" with a small task to carry out. Ushered into a diner, we were given what looked like a cup of coffee but what actually a coffee cocktail, followed by three courses of rather witty food - from another coffee-themed bowl of soup (with savoury dipping donuts) to a breakfast-style main course and of course cherry pie with a caraway twist at the end.

The inventive food is provided by Blanch & Shock, while the entire experience is created by Lemonade and Laughing Gas. Actors playing variations on the series' characters continually appear to improvise some riotously funny drama, leading us into other areas of the sprawling site, including a cocktail bar with some rather seedy rooms off to the side, and a road house with a live show (including a fire eater). Along the way I was arrested by a thug who had been deputised. And I had several hand-made cocktails courtesy of the sponsor Wild Turkey Bourbon. 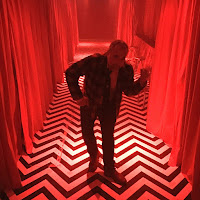 While this installation isn't officially linked to Twin Peaks or David Lynch, it's packed with references that will send chills up fans' spines. I particularly enjoyed the long red-curtained corridor, in which I of course had to do a little dwarf dance of joy.
In the interests of full disclosure, I must confess that I was a huge fan of the show in 1990-1991. I first saw the pilot as a movie projected in a vast cinema at the Miami Film Festival, and was glued to the series as it unfolded. In the summer of 1991, I visited relatives in Seattle and took a drive to Snoqualmie, where the show was filmed, seeing that sinister waterfall first hand and having some damn fine pie and coffee at the real Double-R diner. I was also a card-carrying member of Operation Pine Weasel, writing letters and campaigning to save the show from cancellation. We were successful after the first season, but when the show became more obtuse in the second year, nothing we could do would save it.

And now David Lynch is reassembling the cast for a new season that is scheduled to be broadcast in 2017. To prepare for this evening, I binge watched 15 of the 30 shows that were made - and I had forgotten that the red curtained room scenes were set "25 years later", which is now.

For details: THE OWLS ARE NOT WHAT THEY SEEM