Awards season is heating up with a flurry of late screenings and screener discs before voting deadlines. Two sets of awards I vote in - London and online critics - have a nominations deadline on Friday 15th December, so there's a lot to see. Although there are so many documentaries this year that it's impossible to watch them all. Here's what I've watched in the past few days...

Meryl Streep and Tom Hanks are at the peak of their powers in The Post, Steven Spielberg's expertly made film about the release of Pentagon Papers in early-70s Washington DC. It's startlingly relevant. Christian Bale and Rosamund Pike are excellent in Hostiles, Scott Cooper's remarkably gritty, realistic Western. It beautifully tackles some huge issues. Claes Bang and Elisabeth Moss are terrific in the Cannes-winning Swedish black comedy The Square, which unapologetically takes on the art world. It's challenging and fiendishly clever.

Outside awards season, Better Watch Out is a riotously edgy pastiche that plays with cliches of both Christmas and horror movies to create something both entertaining and nasty. Native is an extremely low-key British sci-fi thriller about two officers on a deep space mission who question obedience to their leaders back home. And after seeing The Disaster Artist last week, I had to check out Tommy Wiseau's 2003 bad-classic The Room, which is every bit as terrible as they say, but also has a bizarre charm to it. Finally, there was this doc, which I watched so I could participate in a lively TV discussion programme... 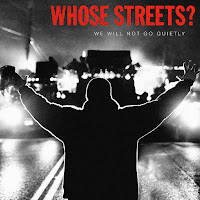 Whose Streets?
dir Sabaah Folayan; with Brittany Ferrell, Bassem Masri 17/US ***.
This documentary takes an intensely personal approach to the aftermath of the shooting of unarmed teen Mike Brown Jr by police in Ferguson, Missouri, in August 2014. Using firsthand interviews and extensive video footage of the events, it traces how the vigil turned into a peaceful march and then an activist movement demanding an end to racially charged policing. And also how this was met with a heavy-handed official response with heavily armed cops in militarised tanks. It's definitely not a one-sided film, condemning the looting and vandalism as well as how the media and police focus on that, ignoring the name of the victim. The springboard is Martin Luther King's statement that "a riot is the language of the unheard". Without ever getting shouty, the film is raw and angry. Although it gets a little bogged down in personal stories. These may be resonant, but they feel a bit off-topic. And as it follows years of investigations, riots, vigils and arrests, it also gets a little repetitive. Which is exactly the point.

This coming week we have the hotly anticipated screening of Star Wars Episode VIII: The Last Jedi, plus Dwayne Johnson in Jumanji: Welcome to the Jungle, British drama Beast, Hungarian drama Jupiter's Moon, Brazilian drama Bingo: The King of the Mornings and the short film collection Boys on Film 17: Love Is the Drug.
Posted by Rich Cline at 10:38