I only had three screenings in my final week of the working year, but then I was rather busy with getting the London Critics' Circle Film Award nominations announced - a terrific event. The films I caught included Pitch Perfect 3, which is being billed as the curtain call for the a cappella franchise, and definitely shows the strain in coming up with something for these talented women to do. It's a shame to go out with such a whimper after the seriously great first two movies. All the Money in the World is notorious for director Ridley Scott's last minute decision to scrub star Kevin Spacey from the movie and replace him with Christopher Plummer. But perhaps future viewers will be able to enjoy this superb true thriller without the baggage. It's one of Scott's best films, a taut drama with terrific performances from Michelle Williams, Charlie Plummer and indeed Christopher Plummer. And Woody Allen's Wonder Wheel also brings some baggage with it, but is notable for Kate Winslet's staggering performance as a desperate housewife in 1950s Coney Island. It's also shot and lit gloriously by veteran cinematographer Vittorio Storaro. And I also caught up with this little gem... 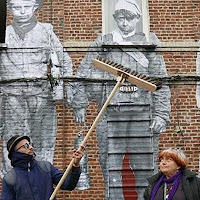 Faces Places [Visages, Villages]
dir Agnes Varda, JR; with Agnes Varda, JR 17/Fr ****
This quirky documentary teams up 88-year-old filmmaking icon Agnes Varda with 33-year-old artist JR as they travel spontaneously around France taking large-format photos and wallpapering them onto various enormous structures. Watching this is a delight, as these two lively figures spar with each other and explore the nature of art and culture. Agnes talks about her life and friendships, and constantly teases JR about the way he hides from the world, obscuring his name and personal life, and even his eyes behind sunglasses. And the people they photograph along the way capture a spark of life in very clever ways that have a big effect on onlookers. Powerful pictures include workers on different factory shifts reaching out to each other, wives of dock-workers towering above them, and Agnes' eyes and toes on train cars. There is also a clever sense of history, with vintage images posted on appropriate surfaces. It's all a little meandering, and sometimes rather too clever to accept as just a random sequence of encounters. But the way it touches on French culture, the history of cinema and larger issues like globalisation is deeply involving.

This coming week will be a chance to watch several screeners of films that were nominated in various awards I vote in. On my list are the docs Jane and The Work, the foreign films Raw and Aquarius, and late-in-the-year releases like Irish drama Sanctuary and German thriller In the Fade.
Posted by Rich Cline at 23:27