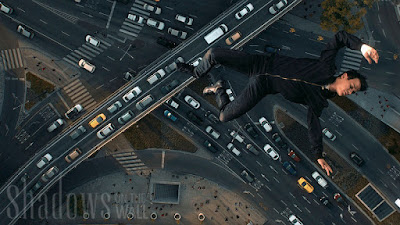 Things are slowly cranking back up after Christmas and New Year, although I haven't yet been to a screening room in 2018, as my films so far have all been at home on screener discs or links. Jupiter's Moon is a fiendishly clever drama from Hungary about a Syrian refugee who discovers he can levitate. Brad's Status stars Ben Stiller as a guy who is annoyingly overthinking his mid-life crisis, with the excellent rising star Austin Abrams as his teen son. Saturday Church is a sensitive, moving drama about a young teen (the superb Luka Kain) trying to balance who he knows he is with who he's expected to be. From Bulgaria, Glory is a clever, involving satirical adventure into the messy depths of publicity and bureaucracy. And I also caught up with this one...

Columbus
dir-scr Kogonada; with Haley Lu Richardson, John Cho 17/US ***.
This extremely low-key drama gets under the skin with its vivid characters and lovely settings, beautifully shot with an architectural eye. Writer-director Kogonaga is exploring the delicate connections we have between each other and our surroundings, using formal camerawork that hones in on the characters, buildings and greenery around them. And it's anchored by a terrific central performance by Haley Lu Richardson as a young woman, only a year out of high school, who has decided to stay in Columbus, Illinois, to take care of her ex-addict mother (Michelle Forbes). Then she befriends Jin (John Cho), in town to look after his eminent architect father, who is in a coma. Their conversations swirl around expectations and dreams as they push each other to break free of the issues that are holding them back. It's a gentle film that never quite works up a head of steam, but its ideas are moving and provocative.

This coming week there are only a few screenings in actual cinemas (things get started very slowly after the holidays), but I'm set to see Martin Landau's last film Abe & Phil's Last Poker Game, the migrant drama In Another Life, the musical doc Eric Clapton: Life in 12 Bars and the sporting doc The Ice King, among other things.

Meanwhile, awards season shifts up a gear with the Golden Globes, the Bafta nominations and more. Keep track of who's winning overall with my annual SHADOWS SWEEPSTAKES.