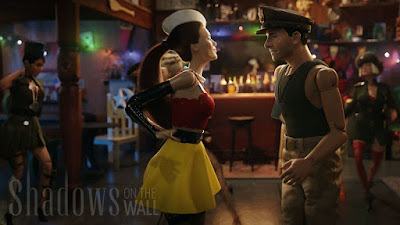 Screenings are slowing down for the holidays, so these were my last movies in screening rooms for the year. Welcome to Marwen is ambitious, an introspective true story augmented with clever effects. So Leslie Mann and Steve Carell (above) play part of their roles as remarkably expressive dolls. It's solid, but more thoughtful than entertaining. All Is True has a hefty cast including Kenneth Branagh, Judi Dench and Ian McKellen, intriguingly tracing the final years in Shakespeare's life. It's well-made and a bit offbeat. Papillon is a true story remake about a man (Charlie Hunnam) sent to a vile French penal colony in the 1930s. Beautifully made, finely acted, but a bit stiff. And the Argentine drama My Best Friend tells a quietly involving coming-of-age story about a teen who develops an unexpected crush. And I also caught up with these two... 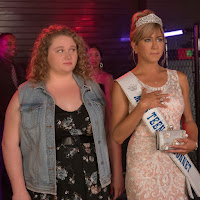 Dumplin’
dir Anne Fletcher
scr Kristin Hahn
with Danielle Macdonald, Jennifer Aniston, Odeya Rush, Luke Benward, Harold Perrineau 18/US 1h40 ***.
Warm and not terribly sophisticated, this gently involving comedy-drama has buckets of charm thanks to its cast and a collection of fabulous Dolly Parton songs on the soundtrack (including new ones written for the film). The seriously gifted Danielle Macdonald stars as Willowdean, who signs up for the beauty pageant her mother Rosie (Aniston) won as a young woman and now runs. This is partly to honour her late aunt, partly to annoy her mother and partly to prove to herself that she isn't bothered by people who make fun of her. But of course there are other lessons she needs to learn. And she also needs to work out her messy relationship with her always preoccupied mother: Rosie loves Willowdean, but dismisses her because of her weight. Macdonald offers a detailed portrait of a bright girl with some dark emotional issues. Her complex mix of confidence and insecurity rings refreshingly true, never simplifying her journey. Although her issues with her mom, best friend (Rush) and the cute boy (Benward) who likes her are less nuanced, leading into the usual teen angst. Of course she sabotages every good chance she gets before ultimately learning to be comfortable in her own skin. Thankfully, it's beautifully played by the eclectic cast (including Perrineau as a drag queen mentor) and directed with enough spark to make it earn the sentiment. It will also offer badly needed encouragement to teens who need it most. As Dolly says, "Figure out who you are, and then do it on purpose." 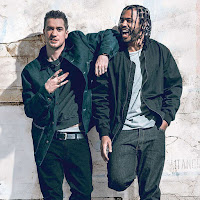 Blindspotting
dir Carlos Lopez Estrada
scr Rafael Casal, Daveed Diggs
with Daveed Diggs, Rafael Casal, Janina Gavankar, Jasmine Cephas Jones, Ethan Embry 18/US 1h35 ****.
Set in Oakland, this is a comedy with a razor sharp edge to it. Lively and audacious, it touches on a range of big issues with wry humour and snappy characters. With just three days left on probation, Collin (Diggs) begins to worry about his friend Miles (Casal), whose obsession with guns and drugs threatens his freedom. Then he witnesses a cop shooting an unarmed man. But he doesn't dare say anything because it was after his curfew. And he doesn't dare challenge the police. The tension in certain scenes is powerfully intense, and always meaningful on much deeper levels. Actor-writers Diggs and Casal create terrific chemistry between them as young guys just trying to make a living with their moving van, developing their private lives and struggling with a system that's tilted against them. While the script is very funny, it is constantly underscored with serious topics and populated with complex characters, each of whom feels like he or she has a big life off-screen. And director Estrada maintains a lively vibe that's entertaining and provocative. This is a powerful look at a young man desperate to prove that he is more than what society tells him he is: a convicted felon. And while the script touches pointedly on racial issues, it's perhaps an even more potent comment on the broader effects of toxic masculinity and gun culture. This is a bracingly well-observed film that's both hugely involving and vitally important. The climactic scene is devastating cinematic poetry.

There are no more screenings for the rest of the year, but I do have a stack of awards-consideration DVDs and streaming links to watch as I navigate the voting season (two sets of nominations down, one to go, then the final voting rounds) and prepare my own year-end list. Things I still need to catch: Private Life, The Kindergarten Teacher, Bad Times at the El Royale, Shirkers, The Other Side of the Wind, They'll Love Me When I'm Dead, and so on...
Posted by Rich Cline at 17:25