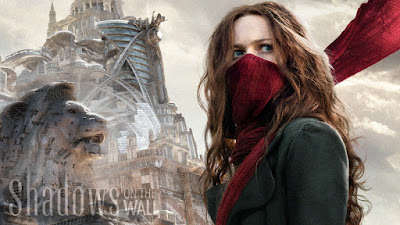 London critics caught up with a couple of big blockbusters this week. Mortal Engines is a whopping effects extravaganza from Peter Jackson, so it's surprising to find the story so simplistic. Spider-Man: Into the Spider-Verse is a whizzy animated adventure with lively characters and plenty of thrilling action.

On the awards-worthy front, we had Hugh Jackman as The Front Runner, the true story of Gary Hart's 1988 presidential campaign scandal, which tells the story in an oddly straight-arrow style. Nicole Kidman and Russell Crowe star in Boy Erased as parents who send their son (Lucas Hedges) to gay conversion therapy. It's thoughtful and moving. John C Reilly and Joaquin Phoenix are The Sisters Brothers in Jacques Audiard's refreshing spin on Western vengeance thrillers. And Natalie Portman is terrific as a Gaga-like popstar in the meaty drama Vox Lux.

A bit further afield, Tyrel stars Jason Mitchell as the only black guy on a white dudes weekend in a cabin in the woods. It's superbly insinuating and creepy. Carol Morely's evocative Out of Blue stars Patricia Clarkson as a haunted detective in a film more about her psychology than the serial killer case. All the Devil's Men is a clunky British action thriller starring Milo Gibson as an anti-terror mercenary. And Newly Single is a bracingly abrasive comedy-drama about a hapless filmmaker.

We have a similar mix of genres this coming week, as voting deadlines in the awards I vote for get closer and closer. These include the Transformers prequel Bumblebee, underwater superhero Aquaman, Christian Bale in Vice, the Coen Brothers' The Ballad of Buster Scruggs, topical drama Blindspotting, and rock-climbing doc Free Solo, among others.
Posted by Rich Cline at 15:02