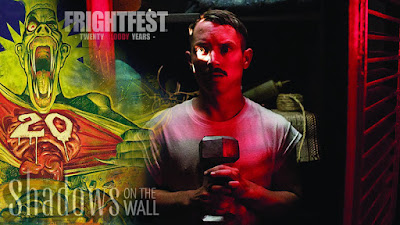 The 20th FrightFest takes place in London over the long weekend, filling cinemas with scary movies. It kicked off on Thursday with Come to Daddy starring Elijah Wood (above), and will close on Monday with the terrific British thriller A Good Woman Is Hard to Find starring Sarah Bolger. In between there is a full range of nastiness - comedy, drama, action, Western, sci-fi, adventure and downright evil. I've caught a number of titles this year, and here's the first batch, linked to reviews where possible (other full reviews will appear closer to the release dates)...

Come to Daddy
dir Ant Timpson; with Elijah Wood, Stephen McHattie 19/Can ****
With a visually stylised, blackly comical approach, director Ant Timpson and writer Toby Harvard spin a cleverly insinuating freak-out. A striking setting and full-bodied performances help the film continually wrongfoot the audience as it spirals in unexpected directions. And each scene is peppered with telling details and amusing touches that deepen both the themes and the film's deranged sense of humour. But the real surprise is how moving it is... FULL REVIEW >

Crawl
dir Alexandre Aja; with Kaya Scodelario, Barry Pepper 19/US ***.
Not much about this bonkers action thriller makes sense, but it's so much fun that it's easy to just go with it. Filmmaker Alexandre Aja knows how to freak out an audience by building suspense, adding an extreme gross-out, providing a big jolt and layering in an undercurrent of psychological tension. He throws all of this and more at this ridiculous premise, and the film is an entertaining scream... FULL REVIEW >

Scary Stories to Tell in the Dark
dir Andre Ovredal; with Zoe Colletti, Michael Garza 19/US 1h48 ***.
More yucky than scary, this enjoyable horror movie skilfully juggles a range of iconic images and themes. Slickly put together in the inimitable style of producer Guillermo del Toro, the film is briskly directed by Andre Ovredal to keep the audience on edge. There's never much of a question about where it's heading, but there's a lot of gruesome fun to be had along the way... FULL REVIEW >

Dark Encounter
dir-scr Carl Strathie; with Laura Fraser, Mel Raido 19/UK ***.
Both a gritty family drama and an outrageous home-invasion thriller, this British film set in rural America pulls the audience in with its offbeat approach to sci-fi horror. The characters are vividly played by a gifted ensemble, and filmmaker Carl Strathie reveals the narrative with skill, using snaky long-takes and superbly atmospheric settings to maximum effect. The film often feels gimmicky, especially when it's trying to push the emotions, but it's powerfully involving.

The Wind
dir Emma Tammi; with Caitlin Gerard, Julia Goldani Telles 18/US ***.
Artfully shot and edited, this whispery thriller reveals its story by crosscutting between two timelines. Set on an isolated 1880s homestead, it's a slow-building atmospheric freak-out that unnerves the audience from the start with its disparate images, enigmatic characters and expansive setting. And as a story of a woman's mind in turmoil, it's also provocative and haunting. Director Emma Tammi is definitely one to watch... FULL REVIEW >

Harpoon
dir-scr Rob Grant; with Munro Chambers, Emily Tyra 19/Can ****
Brett Gelman delivers a knowing narration that establishes this horror thriller's comical tone right from the start, adding snide commentary as he describes a strained relationship between three longtime friends who are at sea literally and metaphorically. The film is strikingly shot, writer-director Rob Grant layers in strong undercurrents that keep the story staggeringly tense, and the three lead actors are terrific.

I Trapped the Devil
dir-scr Josh Lobo; with Scott Poythress, AJ Bowen 19/US ***
Dark and insinuating, this gloomy horror thriller has a clever set-up and a strong cast, although writer-director Josh Lobo can't resist trying to heighten everything with gimmicks like perplexing visuals or pushy sound and music. Confined to a creepy house, the movie has a superb claustrophobic tone, both visually and psychologically. But the pace is slow as it churns along in between some atmospherically freaky moments... FULL REVIEW >