FrightFest: The woman in black 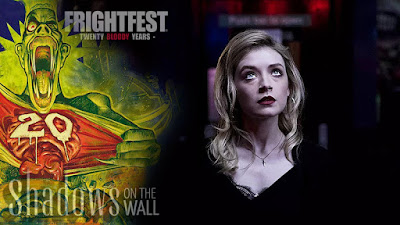 The 20th FrightFest continues through this long weekend in London, with one of the world's best programmes of movies that are designed to rattle the audience to the core. No wonder horror is my favourite genre. Here are a few more highlights, starting with the film that will close the festival on Monday, which stars Sarah Bolger (above). It's my favourite FrightFest movie so far...

A Good Woman Is Hard to Find
dir Abner Pastoll; with Sarah Bolger, Edward Hogg
19/UK ****
There's a gritty, earthy undertone to this melodramatic thriller that lifts it far above the usual low-budget British potboiler. Writer Ronan Blaney and director Abner Pastoll have made a working-class drama that's packed with both nasty suspense and pointed commentary on the system, with a superb cast in complex roles. So even though the production values are basic, the film has a remarkable urgency... FULL REVIEW >

Feedback
dir Pedro C Alonso; with Eddie Marsan, Paul Anderson 19/Sp ***
Completely set within a London radio studio, this Spanish thriller is gripping thanks to its whizzy pace, extraordinary cast and the colourful panache of director Pedro Alonso. The way events play out is skilfully jarring, feeling completely out of control as things get nastier and messier. Perhaps with less screaming the subtext might have been more audible, but it's a taut and chilling ride... FULL REVIEW >

A Serial Killer's Guide to Life
dir-scr Staten Cousins Roe; with Katie Brayben, Poppy Roe 19/UK ***
A witty visual style helps this blackly comical British thriller connect with the audience, as filmmaker Staten Cousins Roe pokes fun at the very nature of defining ambition and "releasing the inner me". The film is sharply well made, packed with amusing observations on human behaviour. But in the end, there doesn't seem to be too much to it, really. Aside from a lacerating look at self-help culture.

The Dark Red
dir Dan Bush; with April Billingsley, Kelsey Scott 18/US ***.
Dreamy and intriguing, this moody drama is beautifully put together, with an earthy approach that finds key points of identification for the audience. Director-cowriter Dan Bush is an assured filmmaker who carefully builds the story using darkly dramatic flashbacks before flipping everything on its head. Where this goes is entertainingly disorienting, continually twisting the tale until it becomes a quietly outrageous rampage.

The Furies
dir-scr Tony D'Aquino; with Airlie Dodds, Linda Ngo 19/Aus ***.
Complete with a properly grisly cold open, this nasty little Australian horror has heavy echoes of Wolf Creek, and not just because its premise features men who inflict random violence on women (and also other men to be fair). Even if the plot is a bit thin, genre fans will love the often mind-bogglingly hideous gore. And there's a riveting pace to the narrative as secrets are uncovered, and as one grotesque set-piece follows another.