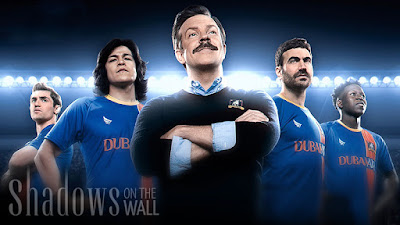 Even with all the movies I'm watching, I still have a bit more time than usual to catch episodes of series television, mainly because I don't have the normal travel time getting into town for physical screenings. The challenge is finding shows that are a tonic after a heavy film - most series at the moment seem to be so serious! So the rare comedy is hugely welcome. This is what I've been watching over the past couple of months...

Ted Lasso
The premise for this sitcom looks lame: earnest American football coach is hired to manage a cynical English football (ie, soccer) team. But it stars Jason Sudeikis and several under-the-radar British comedy assassins (Brett Goldstein, Hannah Waddingham, Nick Mohammed), so I decided to take a look. And this is the best surprise so far this year, one of the smartest, funniest shows out there, subverting expectations at every moment with characters who are a lot more than the usual types. It's also a rare show that takes a positive approach to life in general, making you feel empowered even as you laugh at a wicked joke. (Apple)

Ratched
A rather unconnected prequel to One Flew Over the Cuckoo's Nest, this series is beautifully designed, with a fierce cast. It takes awhile to get going, but the story tightens over these eight episodes, as the eponymous nurse (Sarah Paulson) goes on a deeply personal mission and becomes embroiled in several other nasty events. Performances are terrific, particularly from iconic divas Cynthia Nixon, Judy Davis and Sharon Stone. But the main thing here is the production design, soaked in primary colours, arch architecture and horrific grisliness. The themes feel rather pushy, but it's enjoyably nasty. (Netflix)

A Suitable Boy
Vikram Seth's acclaimed novel gets the period-epic BBC treatment, directed by the terrific Mira Nair, who always brings a blast of colourful energy to her depictions of Indian culture. Set in the early 1950s shortly after independence, the series recounts a series of interwoven romantic storylines that connect four families, complicated by the fallout from the nation's partition. As usual, Tabu steals the show as a singer of ill repute who falls for a young man played by the magnetic Ishaan Khattar. But the entire cast is frankly gorgeous, beautifully dressed in vivid costumes and bursting with emotion and energy. (BBC)

I Hate Suzie
This provocative British black comedy plays with a number of real-life elements while unflinchingly exploring a tricky issue. Billie Piper stars as a singer-actress whose intimate photos are hacked from her phone, causing mayhem in her personal and professional life. But her reactions often make things worse, which gives her character a startlingly complexity, a famous person who is deeply flawed yet has a public persona to maintain. The approach is inventively stylised, with writing that never takes the usual route for a TV show. And what it says about both society and the industry is astonishing. (Sky)

Hitmen
The terrific comedy duo Mel Giedroyc and Sue Perkins put their snappy chemistry into a goofy sitcom, and the fact that they're playing assassins keeps the humour very black indeed. The writing is random and generally hilarious, although the show is awkwardly directed and edited to flatten some of the more outrageous gags. Still, Mel & Sue are so funny that they keep us watching, and their interaction with a range of side characters, from each episode's target hit to their riotous nemeses/cohorts Charles and Liz (Asim Chaudhry and Tonya Cornelisse) leaves us looking forward to a second season. (Sky)

Five Bedrooms
This Australian comedy-drama centres on five young people on the singles table at a wedding, each of whom is at a different point in his or her life, and they decide to buy a big house together. What follows is pretty ridiculous, really, as episodes progress from one carefully scripted catastrophe to the next, including farcical romance, surprise revelations, bankruptcy and even cancer. What makes it addictive is the cast, who manage to make these neurotic people very likeable, even as they continually sabotage their own lives. The question is whether they'll survive a second season of disasters. (Peacock)

Insatiable: series 2
Full-on and deliberately over-the-top, this lurid comedy continues to centre more on murder than sex, which is odd considering that it's about the obsessive people who participate in beauty pageants. But even if the snaky plot continually takes the more obvious, often less interesting direction, the relentless pile-up of soapy twists and turns is riotous and often downright hilarious. And the wildly out-of-control characters are oddly endearing, sharply played by the likes of Dallas Roberts, Debby Ryan, Alyssa Milano and Christopher Gorham. It's not smart enough to be a classic, but it's a lot of messy fun. (Netflix)

The New Legends of Monkey: series 2
This insanely cheesy adventure series is oddly addictive, the definition of a guilty pleasure. It's not even particularly well-made, with its cheap sets and costumes, plus actors who never quite seem like they're taking their roles with even a grain of seriousness. But the goofiness is a lot of fun, and there are some sharply witty moments along the way, including genuinely hilarious dialog and plot points, throwaway one-liners and amusing mistakes. The plot is also so freewheeling that literally anything can happen at any moment. So it's impossible to predict what kind of idiocy is coming next. (Netflix)

The Neighbor (El Vecino)
From Spain, this goofy comedy has a Green Lantern-like plot about the hapless Javier (Quim Gutierrez) who is given superpowers and a whizzy suit and charged with protecting the galaxy. And his dorky neighbour Jose (Adrian Pino) tries to help him become a better superhero. The joke is that everyone in Javier's life would make a better hero than him, and indeed he's a bit too self-involved, so it's no wonder that his relationship with unambitious journalist Lola (Clara Lago) collapses. But watching his transformation is fun. And the show's low-fi special effects make it even more charming. (Netflix)

Chewing Gum: series 1-2
After I May Destroy You, I realised that I had missed Michaela Coel's previous series, an equally complex and clever comedy about a young woman trying to escape her fiercely religious upbringing and explore the previously forbidden real world. It's all a bit broad and sometimes downright manic, but Coel is terrific as the hapless late bloomer Tracey, making witty comments to-camera as she barrels through a series of madcap experiences. And as the series continues, the side roles become better defined, which makes them both funnier and more emotionally involving. (BBC)

Lucifer: series 1-3
I've inched my way through this show, a terrific tonic when I need something mindless. The concept is witty (the devil fights crime in Los Angeles!), and the comical tone keeps it vacuously enjoyable. The preposterous murder-of-the-week plots, on the other hand, are essentially reworked from old episodes of Hart to Hart. It's also one of those shows that pretends to be sexy and raunchy while shying away from anything remotely realistic. But the characters are vivid enough to hold the attention, and their twisted inter-relationships make the show consistently watchable. Let's hope it finds some edge as it moves to Netflix. (Fox)

Eastsiders: series 1-4
This show was recommended for its writing, and it's well worth catching up with because the scripts are unusually strong. Over four seasons, the show focusses on a group of people who live in a queer L.A. bubble (no native Angeleno would ever think of Silverlake as "east"). The characters are siblings, neighbours and couples, many are gay, and all are dealing with the usual crises. But this is written and played with remarkable insight. Not only are the actors honest and messily real, but the dialog pops with lines like: "Let people be who they are, and then they will do for you the same favour." (Netflix)

Away: With this talented cast, it's shocking how bad the writing is, a cliched soap full of improbable melodrama. There's no way Nasa would send this bickering crew to Mars, complete with Russian and Chinese disruptors, facing a silly calamity each week. I made it through the second episode before giving up. (Netflix)

Muppets Now: The Muppets are back once again in another format that seems carefully concocted for the times: namely a computer screen. Some segments are amusing, especially offhanded moments with the starry guests. But it's trying too hard, and the writing fails to make anything of these iconic characters. (Disney)

NOW WATCHING: The Boys (2), Fargo (4), Lovecraft Country, The Third Day, The Duchess, The Comey Rule, We Are Who We Are, Long Way Up.