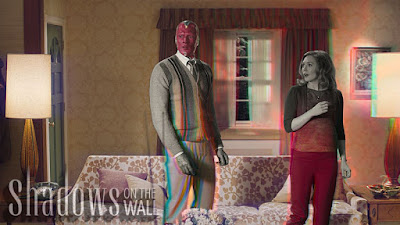 The seemingly never-ending lockdown continues to provide more time to watch television than usual, and I've squeezed in entire series between films over the past few months. It's been a largely mixed bag, with only a few triumphs: It's a Sin, Call My Agent (final season) and Young Rock (so far). There seems to be a bit of a lull at the moment, so I'm catching up with a couple of things before new stuff begins dropping in May. Here's what's kept me distracted since January...
Wandavision
Just when you've think that Marvel has played all its cards, this show breaks new ground with its opening episodes, dead-on pastiches of sitcoms from the 1950s to the 90s. Paul Bettany and Elizabeth Olsen have fun with the lead roles, playing to the laugh-track silliness while adding an undercurrent of dread. There are terrific side roles for Kathryn Hahn, Teyonah Parris and Randall Park. And the production values are extraordinarily cinematic for a half-hour TV series. Then reality flips and it becomes rather a lot more Marvelly, especially as it approaches another overblown, formulaic, effects-heavy finale. It's a shame that the story ultimately feeds the Marvel Universe beast, because this would have been iconic as a stand-alone show. (Disney)

It's a Sin
Russell T Davies mines his personal history for this lively, telling series set in 1980s London. It's a strikingly fresh approach to the period, capturing a realistic mix of energy and life as a community of gay men faces the horror of the Aids outbreak. Olly Alexander shines in the central role, while newcomer Callum Scott Howells deserves to become a star for his terrific turn as the observant Colin. Davies has a gift for creating ensembles of recognisable people then sending them through literally earth-shattering events, while never losing either the humour or emotion. This approach makes the show a landmark exploration of the Aids pandemic, and with only five episodes it left us wanting more. (BBC)

Lupin
Fiendishly entertaining, these first episodes are labelled as "Part 1", and (warning!) they end on a cliffhanger that leaves us impatient for the next chapter. Omar Sy brings his outsized charisma to his gentleman-thief character Assanne, who was raised on, and seeks to emulate, the classic Maurice Leblanc stories about Arsene Lupin. The show's cat-and-mouse structure is a lot of fun, as are the elaborate heists and cons that fill each episode. And it'd also deepened with some complex interpersonal issues. There are a few rather obvious plot elements, but it's all so skilfully written and played that we're happy to go along with it. And now we're waiting impatiently for Part 2 in the summer. (Netflix)

The Irregulars
There's a lot to enjoy about this scrappy adventure-thriller about a group of offbeat teens in 1870s London. The writing is fairly simplistic, relying on corny horror, the usual relational carnage and a lot of magical mumbo jumbo, and the show seems oddly unsure how to handle the presence of Sherlock Holmes (a fascinating Henry Lloyd-Hughes). But Dr Watson (Royce Pierreson) adds intrigue to the shenanigans, and the young cast members manage to be likeable even though their characters are all a bit too reactionary, impulsive and downright angry about everything. Darci Shaw is particularly strong in a difficult role, delivering on the promise she showed as the young Judy Garland in Judy. (Netflix)

The Stand
Stephen King's epic 1978 novel gets the sprawling series treatment, with a sometimes jarring structure that unevenly flickers around in time. The eerily resonant premise is set around a pandemic that kills 99.9 percent of humans, leaving the remnant to take a stand with good in Boulder (James Marsden and Whoopi Goldberg) or evil in Las Vegas (Alexander Skarsgard and Nat Wolff). The editing is unnecessarily choppy, and the direction makes the whole show look rather cheesy, but the excellent actors help the series build some momentum as things heat up. So it's frustrating that the writers and directors botch the climax then finish on a jarringly lacklustre epilog. (CBS)

Your Honor
This show's hyper-manipulative style makes it both gripping and annoying at the same time, particularly in the wildly intense, downright panicky first episode. And things remain at peak-pressure moving forward. Bryan Cranston is excellent as a determined judge compromised by his son's involvement in a hit and run that's linked to a mob boss and his fearsome wife (the terrific Michael Stuhlbarg and Hope Davis). The script throws everything imaginable at the characters, and then some. So even with the continuous glaring plot implausibilities and very few characters who remain likeable, it's compulsively watchable rubbish. (Sky)

The One
There's a terrific idea at the centre of this series: that DNA can be used to find your perfect match. Although there are serious problems with the writing, from a string of massive holes in the premise to an over-reliance on the tired procedural murder case that holds the series together. It would have been far more engaging to explore the central idea with more complexity. Side-plots are promising, but they're never developed into anything interesting, merely feeding into a dull mystery. The casting seems oddly dull, but the actors are strong enough to hold the interest. And of course there's always the hope that the show might go somewhere interesting. Alas, it doesn't. (Netflix)

Young Rock
Dwayne Johnson has so much charisma that he's easy to watch in just about anything, and here he's playing a ridiculously starry version of himself, narrating his life story. Three terrific young actors play him at 10, 15 and 20, and after the choppy first episode it just gets better and better, inventively diving in for a nuanced and often hilarious exploration of each period in Johnson's entertaining young life, surrounded by riotous family members and colourful wrestlers. With its 2032 framing scenes (featuring the superb Randall Park interviewing Johnson about his presidential campaign), this series could run and run. And Johnson could no doubt run 11 years from now. (NBC)

Kim's Convenience: series 5
In its final season, this series continues with its collection of snappy and amusingly insecure people causing all kinds of awkwardness as they meddle in each others' lives. Simu Liu missed the first few episodes (as he was off being a Marvel star), but makes a welcome return. And each of the ensemble cast members continues to add wrinkles to his or her character, riffing off each other with silly enthusiasm. It's all very broad, and most of these people are infuriating; perhaps a bit more progression in the overall story arc would make it a classic. But it's hugely likeable, the humour is warm and often topically resonant, and in its own nutty way the show frequently touches a nerve. (CBC)

Call My Agent: series 4
With another collection of perfect episodes, this awesome French comedy comes to an end after four seasons. Sigourney Weaver, Jean Reno and Charlotte Gainsbourg are among the actors playing themselves as they drive their agents around the bend.  And once again the ensemble led by Camille Cottin, Thibault de Montalembert and Gregory Montel are endearing, intrepid and hilariously inventive as they try to both save their firm and maintain relationships with their riotously passive aggressive clientele. There are only 24 episodes in total, and they are hugely binge-worthy. It's a shame they're not making more of them, but this is the kind of classic show that will be worth revisiting from time to time. (Netflix)

Snowpiercer: series 2
Things have become much more heated, as it were, in this second season, as Snowpiercer has merged with supply train Big Alice, bringing a new collection of troublemaking characters, including Sean Bean as the imperious Wilford. Emotional issues are bubbling up everywhere, and they bring far more interest than the action thrills. There are also intriguing things going on outside on the frozen-over earth, although sending Jennifer Connolly out there feels like a mistake dramatically, because the warring factions on the train aren't nearly as interesting as the slow-churning power struggle between her, Daveed Diggs and now Bean. Still, the season built to an exciting climax. (Netflix)

Dickinson: series 2
There's an ongoing problem with this show, as it indulges in so many flights of fancy that it's difficult to determine what's actually happening in the plot and what's in the imagination of iconic poet Emily Dickinson, who is sharply well-played by Hailee Steinfeld. Plus of course the unmissable Jane Krakowski as her mum. The modern-day touches are witty and very clever, making this feel like a more accurate rendition of history than the usual po-faced approach. This also allows for some perhaps too-knowing references to present-day issues. And while there are real biographical elements scattered throughout each episode, the writers are mainly creating stories out of implications between the lines of poems and letters. (Apple)

Staged: series 2
After making a splash with their offhanded, larky lockdown sitcom, Michael Sheen and David Tennant are back for more six months later. And the premise is hilariously inspired, as they try to sabotage Hollywood's efforts to make an American version of season 1 without them. Big stars again make witty cameos, including Whoopi Goldberg and Ben Schwartz as slippery agents, plus Cate Blanchett, Phoebe Waller-Bridge, Ewan McGregor, Michael Palin, Jim Parsons and many more playing ridiculous versions of themselves. All of this is a knowing look at the insecurities of being an actor, played to perfection using video conferencing screens, then sharply edited to keep us chuckling. (BBC)

Raised by Wolves: The idea for this show was intriguing, and it came recommended, but I struggled to get through three episodes of ponderous moralising before giving up. I just couldn't find a reason to care about anyone on-screen. (HBO)