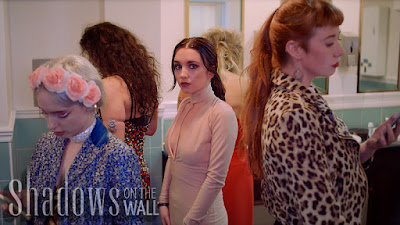 Sadler's Wells was essentially turned inside out by London-based choreographer and artist Christopher Matthews, as visitors were taken on a journey through every corner of the venue, confronted by more than 20 works using video, sound, installation art and live performances. Matthews' cites Janet Jackson as inspiration (the title comes from her 2008 track Feedback). So the entire interactive experience plays on pop culture and the idea of cutting loose on a nightclub dance floor. It's a celebration of diversity, confronting lines we draw around gender, sexuality, ethnicity and style.

Matthews' most uncanny trick here is to draw us into each setting as both spectator and participant, particularly with a clever use of space, light, music and snippets of voice recordings. While observing bodies in motion, we are encouraged to engage with our own senses and physicality, with Matthews getting us in the mood by calling us "sexy" and "hun" in the signage that directs us up and down stairs, through backstage doors and into the main performance spaces. Early on, archive/photo/copy is set out as a series of collages juxtaposing photos of body parts, taken from Sadler's Wells performance posters, an opening challenge to see physicality through new eyes.Among the installations is the short film Star Factory (top), which choreographs a group of women in a nightclub restroom as they make themselves ready for public consumption. Entering the Sadler's Wells stage from the back, we share the cavernous space with the world premiere of Matthews' My body's no.1, in which two male dancers gyrate atop plinths, balletically interacting in unexpected ways. It's a fascinating mixture of evocative imagery, from go-go dancers to statuary. In the auditorium, the film Dance Triptych reveals Songhay Toldon performing on an empty stage in a remarkably expressive, free way - a performer euphorically cutting loose at a club. There are also two video pieces each by Fenia Kotsopoulou and Nasheeka Nedsreal, finding mesmerising ways to challenge the way we perceive gender, bodies and movement. Another live performance is #lads in the Lilian Baylis Studio, in which Matthews again deliberately queers masculinity as two people in tracksuits take turns striking arched poses on the floor, while the other takes photos on a phone or occasionally joins in, accompanied by a responsive sound mix. There's one other live performance, Quartet by Phoebe Berglund, which moves around the lobby space with playful synchronised choreography.

With this one-of-a-kind exhibition, Sadler's Wells is reinventing the way it can use its various spaces to explore deeper ideas about dance. And in allowing the audience to roam through the back hallways, dressing rooms and rehearsal studios, we also become more intimate with the venue and its history.