Stage: It's the end of the world as we know it 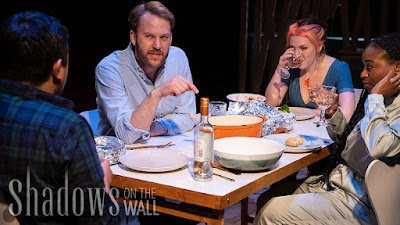 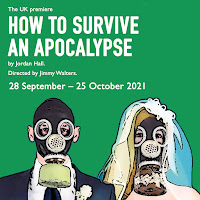 Originally performed in Vancouver in 2016, Jordan Hall's riveting play takes on new resonance in a world plagued by a pandemic, supply chain issues and political turmoil. It fits perfectly in the small space at the Finborough Theatre in West London, with a set cleverly designed by Ceci Calf to evoke a variety of locations and a four-person cast who is simply on fire.

The story centres on Jen (Atherton), a magazine editor who doesn't mind supporting her videogame designer husband Tim (Sullivan), who's out of work at the moment. Then Jen's handsome, flirtatious boss Bruce (Lamb) puts a question in her mind, suggesting that the magazine's faltering finances mean that it should be relaunched for urban survivors. And that survival means that Jen should ditch Tim. As these thoughts churn in her mind, they also infect Tim, who begins designing a survivalist game. And to get Bruce out of her mind, Jen sets him up with her recently single friend Abby (Gomes). When both couples head off on a camping trip, their spiralling thoughts are bound to create fireworks.

The dialog is razor sharp, packed with a realistic mix of humour and affection, barbed insults and pointed provocation. This makes each of the characters almost unnervingly recognisable. And conversations cleverly circle around the end of the world, as witnessed in the 2008 crash and political instability in the world's leading countries (it's set in 2016, the year democracy died), plus of course the personal crises each of these people is facing.

Atherton is magnetic as Jen, who takes to heart the idea of locally sourced food, stocking up for emergencies and pondering her future. She begins to question her choices, longing for the life she imagined for herself as a teen. Which is of course a dangerous path to go down, especially when she's being encouraged by Lamb's superbly charismatic Bruce. He brings out Bruce's intelligence with chilling effect. Sullivan is also terrific as the fragile Tim, whose self-confidence has taken a heavy hit. And Gomes adds contrasting textures as the ever-hopeful Abby.

With the stage in the middle of the room and the audience on both sides, the show is ingeniously imagined by director Jimmy Walters to let scenes merge into each other. This creates a powerful sense of momentum that builds through bracingly realistic interaction into a few astonishing confrontations on the camping trip, one of which is genuinely scary (especially if you're sitting in the front row). Meanwhile, ideas are flying everywhere, keeping us engaged both mentally and viscerally. And leaving us with plenty think about when we return to our own post-apocalyptic wastelands.
Photos by Sam Taylor • 30.Sep.21
Posted by Rich Cline at 19:08