Stage: What is love anyway 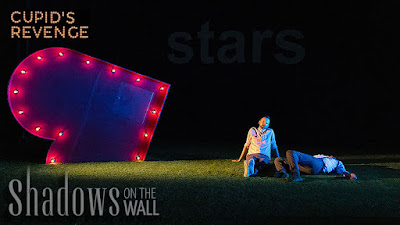 Taking on the massive theme of mythical love, Tom Roden and Pete Shenton carry the audience on a remarkably engaging odyssey over an hour of riotous comedy, physicality and emotion. It's an extraordinary show, which feels simple and almost haphazard in the way it's put together. But in the end it reveals its complexities in a final act that's properly powerful.

Roden and Shenton have been working together for more than 20 years. They put this show  together before the pandemic, then used lockdown to hone it into their most ambitious performance yet. At the top, they challenge the audience to find the funny things, and then they keep us laughing fairly nonstop with their evolving banter, going back and forth to push each other verbally and physically in a series of lists that inventively circle around back on each other using a witty mix of words, dance, sound and imagery.

The central idea is that the concept of love has been watered down by advertisers who use it to sell us things. And yet we still know the difference between this and loving a friend, relative or romantic partner. To cut through this, Roden and Shenton start wide, chatting about the nature of being and the different ways we interact with society and each other. It feels silly and random, but gets increasingly personal as it goes along, repeating key words and movements to provoke a wide range of thoughts about human connections. The way it comes together in the end is breathtaking. 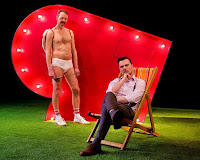 It's a simple stage, a large square of artificial turf onto which it seems like a brightly lit heart has crashed alongside two deck chairs that are referred to as being on a pier in Llandudno. Echoing phrases and choreography fills this space, including a repeating slow-motion scene in which Cupid fires an arrow across the stage. The show is precisely choreographed while also allowing for some moments of loose improv. This allows for some timely gags and rudely personal insults that affectionately nod at the duo's decades of working together.

Roden and Shenton take a lovely non-political approach to issues that are usually partisan, as their patter encompasses religion, government, sexuality and ethnicity without any judgement. And their loose, often deliberately ridiculous performances beautifully capture the joys of childishness and of connecting with another person. This is a knowing look at what makes us human, and it plays out like a refreshing tonic in a divided, cynical world.