Flare: Be yourself tonight 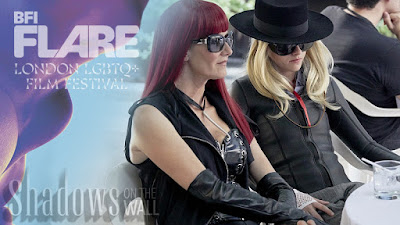 Well, another year of BFI Flare came to a close last night with the premiere screening of Jeremiah Terminator LeRoy, attended by director Justin Kelly and writer Savanna Knoop, whose story the film recounts. This was followed by another roaring party night. At this year's Flare, I saw 23 features (plus 10 features I'd seen before the festival) and 24 shorts. Here are a few more highlights, and then below that are my best of the fest lists...

Jeremiah Terminator LeRoy
dir Justin Kelly; with Kristen Stewart, Laura Dern 19/Can ****
After the terrific 2016 documentary Author: The JT LeRoy Story, these true events get a dramatic feature with knock-out performances from Kristen Stewart and Laura Dern in the central roles. Director Justin Kelly keeps the pacing brisk, never wallowing in the melodrama as he explores issues of identity and connection from fresh angles. It's still a rather mind-boggling story, but this film cleverly humanises the characters, revealing their flaws without vilifying them.

From Zero to I Love You
dir-scr Doug Spearman; with Scott Bailey, Darryl Stephens 19/US ***
An ambitious romantic comedy with hints of deeper themes, this bright and watchable movie is loaded with good-looking people who remain likeable even when they do something stupid. Writer-director Doug Spearman orchestrates the twisty story with some flair, although the story can't help but feel somewhat simplistic and predictable, especially with an uneven collection of side performances. But even if the film is somewhat arch, it's easy to identify with the central characters.

Ostensibly a documentary about an unusual body-building competition, this film is actually a much more profound exploration of masculinity, community and self-acceptance. It's powerfully moving all the way through, as filmmaker T Cooper takes an intimate approach to the stories of five competitors, each of whom recounts his extraordinary story with humour, honesty and an open heart. The competition is Trans FitCon in Atlanta, which accepts anyone who identifies as a trans man, regardless of physical presentation. From Minneapolis, Dominic is a lively 26-year-old rapper who is just having his first surgery (yes, there's footage of it). He has also just connected to his biological mother and heads off to meet her (this scene is amazing). In Cleveland, Mason is 40 and married, competing in mainstream bodybuilding meets, where no one knows he's trans. His biggest frustration is what to wear in the tanning booth, because the tiny bikini reveals too much. Rese is in Atlanta, a 23-year-old single parent rejected by his family and exorcised by his pastor. He's eventually taken in by his grandparents, then marries a trans woman who also has a child. Kennie Story is 34 from Conway, Arkansas, a university fitness coach whose girlfriend worries about him starting on testosterone, because it will make him too masculine. And in Miami, the hulking Tommy is a 40-year-old heavyweight whose parents refused to kick him out even though their church told them to. Cooper includes interviews and scenes with a wide range of family and friends, each openly discussing their feelings. "I don't understand," Kennie's mother admits, then adds, "but that's my kid! I love her and that trumps everything." And their body-builder colleagues are hugely engaging too, revealing strong backstage camaraderie. All of this makes the film deeply endearing, a profile of people who are hugely likeable, with big personalities and the same hopes as everyone else. And the way they face their challenges also reveals them as heroes. "I've been called every name you can imagine," one says. "But I don't care, I'm being my authentic self."