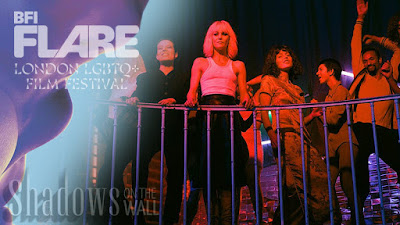 Just as the final weekend kicks off, I'm already feeling pretty partied out by the 33rd edition of BFI Flare: London LGBTQ+ Film Festival. But I've had a couple of early evenings, so hopefully I'll make it through the weekend's rather intense schedule of screenings, meetings and, yes, parties. It all wraps up tomorrow night with JT Leroy (my final blog post will be on Monday). Meanwhile, here are more highlights, including longer reviews of two documentaries below, including a stunner from the archive...

Knife + Heart [Un Couteau Dans le Coeur]
dir Yann Gonzalez; with Vanessa Paradis, Nicolas Maury
18/Fr ***
Lurid colours and bold stylistic flourishes add interest to this offbeat French thriller. Director-cowriter Yann Gonzalez floods the screen with primary colours, bleached blonde hair, fantasy sex and grisly murder, merrily blurring lines in the films within the film. It's rather too melodramatic to take seriously as a slasher horror, but the lively, camp approach keeps the audience entertained, especially in its more playful moments. And there are some elements that provoke deeper thought as well.

Sunburn [Golpe de Sol]
dir-scr Vicente Alves do O; with Ricardo Pereira, Oceana Basilio 18/Por ***.
There's an intriguing fluidity to this sunny Portuguese drama in which four friends go on holiday at an isolated villa. Filmmaker Vincente Alves do O cleverly drops little touches into each scene, often using experimental styles and bold imagery as he reveals details of attitudes and connections. The story may be somewhat elusive and melodramatic, but the film is a fiercely observant look at the complex nature of human connections.

Mapplethorpe
dir-scr Ondi Timoner; with Matt Smith, Marianne Rendon 18/US ****
Writer-director Ondi Timoner spent more than a decade getting this biopic made, and her attention to detail shows. This is a boldly told story, skilfully capturing the style of the period as it recounts the life of iconic photographic artist Robert Mapplethorpe. And Matt Smith gives a strikingly loose, authentic performance as a man who, instead of adapting for the mainstream, brought the fringe right out into the spotlight, finding beauty in every corner of his life... FULL REVIEW >

United We Fan
dir-scr Michael Sparaga
with Nichelle Nichols, Scott Bakula, Zachary Levi, Amy Acker, Skeet Ulrich, Bjo Trimble, John Trimble, Dorothy Swanson, Rod Roddenberry, Donald P Bellisario, Harry Thomason, Barney Rosenzweig
18/US 1h37 ****
Focussing on fans who fight back when their favourite shows are cancelled, this is a documentary about hope. With a snappy pace and a cheeky sense of humour, it's also a treasure trove of stories, memorabilia and superb interviews with fans, stars and producers. Primarily aimed at geeks, the film has a lot to say about the state of the entertainment industry. The central figures are Bjo and John Trimble, who created the first fan action to save Star Trek in the 1960s (they also ran the campaign to get the first space shuttle named Enterprise). From here it traces projects aimed at shows like St Elsewhere, Quantum Leap, Cagney & Lacey, Designing Women, Person of Interest, Jericho (sending 25 tons of nuts) and Chuck (with star Zachary Levi making 600 sandwiches in London to encourage Subway as a sponsor). For Veronica Mars the fans used crowd-funding to get a movie made. Along the way, Dorothy Swanson founded Viewers for Quality Television in the early 1980s to mobilise the grass roots and demand that good shows aren't cancelled. Now the internet has taken this on, as fans are more visible than ever with hugely vocal online communities. This has led to some very creative campaigns over the years, not all of them successful (there's no mention of the one I got involved with, Operation Pine Weasel, which gave Twin Peaks another season). The film gets a bit sidetracked talking about the activists' personal lives, including marriage and sexuality issues, although this cleverly makes it impossible to dismiss them as nerds. It also highlights the passions of people who see themselves represented on television and don't want their show to go away. This leads to a fascinating exploration of "baiting", when producers put ethnic or gay characters into their shows to appeal to a specific audience. But the point is that the highest rated shows just don't have such passionate fans, because they appeal to everyone. And because of these trailblazers, TV is a little smarter today.

Tongues Untied
dir Marlon Riggs
with Essex Hemphill, Marlon Riggs, Larry Duckette, Gideon Ferebee, Christopher Prince, Steve Langley, Michael Bell, Bernard Branner, Ben Callet, Gerald Davis, Kenneth R Dixon, Darnell Stephens-Durio
89/US 55m *****
Opening with the chant "brother to brother", this bold, rightly angry documentary confronts the persistent perception that all black men are thieves. Hinging on the fiercely evocative beat poetry of Essex Hemphill, the film features powerful images of black men as artists, dancers, friends and lovers. Made in 1989 and now restored, this is a kaleidoscopic stunner that packs a lot into its brief running time, including a range of amusing anecdotes with punchlines. It's edited with a pulsing rhythmic thump that catches the attitudes, music, humour and energy. Along the way, filmmaker Marlon Riggs recounts his own experiences growing up as a gay black man with torrents of abuse from every community he was in, and those he was outside as well. This remarkably textured, painful chronicle of the depths of prejudice in society, includes racial, religious, political and social elements. It's seriously chilling as it remarks how casual comments and jokes actually cut us down, making us feel less than worthless. But there's also the joy in discovering others like us, including love from unexpected places. Lighter moments include a trip to the Institute of Snap!thology, coaching the audience in the difference between the mini-snap and diva-snap. And there's a moving undercurrent of Aids awareness, which is especially strong since the film was made in the midst of the epidemic. The juxtaposition of images from civil rights marches with gay pride is particularly strong. In other words, the film's visual and verbal dexterity should make us angry too, as the men who are speaking here are simply expressing their deep feelings at the injustice and bigotry around them. "Anger unvented becomes pain ... rage ... violence." But ultimately, this doc is a heartfelt search for self. Provocative and moving, it deserves a prominent place in film history.