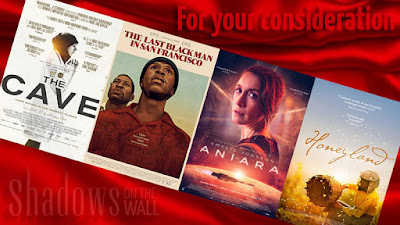 Here are four more films I caught up with - things I missed on their cinema release. It's impossible to see everything before drafting my best of the year lists, but I try to listen to recommendations...

This documentary explores the five-year siege of Al-Ghouta, a Damascus suburb viciously attacked by its own government forces with help from Russia's military. It's a haunting, provocative film that focusses on a doctor in an underground hospital known as The Cave. In addition to the falling bombs, she has to cope with patients who are both wounded and dealing with serious illness, plus a misogynist culture that belittles women.

As Syria's president Bashar wages this horrific assault, Al-Ghouta's millions of residents flee to refugee camps or hide in tunnels under the city. In the hospital, paediatrician Dr Amani not only tends to the children but has also been selected as hospital manager by her staff. She works alongside surgeon Salim amid the constant roar of warplanes and explosions, trying to fortify above-ground parts of the building. But men continually insult her for working, rejecting her as both doctor and manager. Back in her hometown, her parents understand the risks she's braving. So they're both worried and deeply proud of her, the people she has saved and the women she has employed, flouting convention to help them take care of their families.

"Since you were born, you never let anyone tell you what to do," her parents say on one of their FaceTime chats. "You really should have been born a boy!" Using fly-on-the-wall camerawork, the film follows her through situations such as evacuating children to a tunnel playground or dealing with things like chemical attacks and power cuts. It's astonishingly intimate footage, beautifully shot up-close to capture real people in a harrowing situation. Her colleagues include Samaher, a cheeky nurse who is forced to do all the cleaning and cooking (after refusing to help, men complain about the food). She also plots a surprise 30th birthday party for Amani, although the smell of popcorn gives it away.

Yes, filmmaker Fayyad balances the trauma with humour and quiet moments of honest humanity. And the cameras capture strikingly powerful moments, such as when Amani asks a young girl patient what she wants to do with her life, maybe something important like a doctor or teacher? Or when Amani makes a house-call to a desperate single mother who's not allowed to work to feed her four malnourished children. "Religion is just a tool for men to do what they want," Amani observes. "It wouldn't diminish them if women could make their own decisions and contribute." Of course this begins to get to her. As does the fact that her own government is trying to kill her. Fear, exhaustion and hope against hope are vivid in each person's eyes, highlighting the powerful emotional truth of what the world is allowing to happen in Syria.

Based on a Swedish poem, this inventive sci-fi drama explores the nature of humanity and mortality with sharp insight. It's a remarkably clever idea, instantly involving and skilfully shot in a way that centres on the people, keeping the effective visual flourishes in the background where they belong. This allows the story to move through some exhilarating moods as is tips toward horror.

Following the collapse of Earth's ecosystem, humans flee to the outer-space cruise ship Aniara. During their three-week journey to Mars, passengers spend time shopping, playing games, visiting cafes, clubbing, exploring the ship. Joining the crew is MR (Jonsson), who hosts the Mima attraction, which creates a wilderness experience based on memories. But on day one, the ship is knocked off course. The fitness-obsessed captain (Kananian) says it will take years to correct this, but MR's astronomer roommate (Martini) knows that will never happen. So can they settle in to this new life?

Filmmakers Kagerman and Lilja expertly observe this slowly disintegrating microcosm. The first cracks are minor, as passengers turn to Mima for the comforts of their home planet, putting more pressure on MR, who tries to assure customers that life on Aniara is more pleasant than Mars. Then the narrative jumps forward three years, as the darker side of humanity infects Mima and brings suspicion on MR. Even later, religious cults form on the ship, and a rendezvous with a probe promises hope.

The knowing script explores all kinds of angles using this premise, including issues of addiction, criminality, suicide, religion and even romance, as MR hooks up with a hunk (Jiber) but develops a crush on aloof, feisty pilot Isagel (Cruzeiro). The film touches on virtually every layer of society without flinching, leading to a chillingly provocative final act that raises all kinds of resonant themes. A haunting, powerful film.

With a blast of fresh energy, this film paints a witty, knowing portrait of the Bay Area's shifting social landscape. Warm and engaging, this is a low-key buddy comedy about two friends seeking justice in a world that's out of balance. Filmmaker Joe Talbot takes a gently loping pace through this slight story, concentrating on the characters and their earthy interaction.

Tired of waiting for the bus, Jim and Mont (Fails and Majors) skateboard across town to the house built by Jim's grandfather. Remembering his childhood there, Jim hopes to get it back one day, but the neighbourhood has now been gentrified, and the white occupants (Ewalt and O'Brien) don't like him sneaking in to touch up paint or tend to the garden. After a lifetime of squatting with his dad (Morgan), Jim is living with Mont and his blind grandfather (Glover). Then he launches an audacious scheme to reclaim the family home.

Beautifully shot with attention to detail, the film has terrific actors who play roles that ooze both charm and spiky underlying attitude. Fails and Majors have a thoughtful, likeable chemistry that strikes a strong contrast with the incessant macho bluster of the other young men who hang out in the streets. Not much happens in the plot, and perhaps relationships could have been developed a bit more. But there's plenty of time for the actors to add deeper layers to their characters, including some intriguing side players as Mont stages a perhaps too-pointed play for the entire cast: "Let us see beyond the stories we are all born into."

In addition to taking on themes within the black subculture, most obviously the issue of endemic racial inequality, the script also touches on surrounding topics such as the polluted water in the bay and the viciousness of wealthy land owners. And at its centre, this is a passionate lament for the way gentrification tears the heart out of a neighbourhood, obliterating history while forcing residents further into society's margins. Thankfully, Talbot resists turning it into an angry rant: this is a love letter to San Francisco.

Spectacularly shot and expertly assembled, this film observes what happens when the peace in a rural corner of Macedonia is disturbed by noisy interlopers. The filmmakers depict the people and events with a terrific attention to detail, capturing lively textures in the interaction. It's a gorgeous film recounting a dramatic story in a way that's profoundly moving.

At 55, Hatidze lives with her stubborn 85-year-old mother Nazife on a farm in the mountains of Macedonia, where she carefully tends to her beehives. She shares her honey with the hive, to encourage them to make more. Then she travels into the big city Skopje to sell her half at markets. One day a family of travellers encamps next door: Hussein and Ljutvie with their six clambering, boisterous children, plus noisy chickens and cows. Hatidze bonds with the family and instructs them in beekeeping. But Hussain is coerced to harvest his honey too early, so his frustrated bees attack Hatidze's hives, creating a feud between them.

Filmmakers Kotevska and Stefanov spent three years chronicling Hatidze's life, bringing out her steely personality set against the very different people she connects with. And no one hides anything from the cameras. Much of what happens is everyday routine, but there are constant quirks, conflicts, misadventures. Hatidze's only luxury is the chestnut hair dye she buys in town. Her mother complains jokingly, "I can't go outside, I've become like a tree. I'm just here to make your life a misery." There's also plenty of local colour, such as a festival at which men wrestle in the fields, something the kids immediately mimic. One of the boys helps a cow give birth ("Please don't be a male"). And then there's Hussein's scorched-earth approach, as he refuses to take responsibility for his harmful actions or have any respect for either nature or other people.

The unfolding story of these neighbours is riveting, recounted in a way that's both strikingly visual and intimate. Watching Hussein push his kids and lie point-blank to Hatidze is chilling. While the way Hatidze protects nature is lovingly observed, as is how she tends to her bees and her mother. The growing friendships between Hatidze and the children are beautifully captured in pointed sequences, noting her own sense of loss at never being a mother, something she confronts her own mother about. In other words, this lovely documentary works beautifully both on a small, personal scale and as an exploration of some much bigger themes about humanity around the world.

C R I T I C A L   W E E K :
The only other films I saw this week were the sumptuous Chinese arthouse odyssey Long Day's Journey Into Night and Transparent Musicale Finale, the offbeat movie musical that wraps up the TV series. This coming week I have a screening of the Polish Oscar contender Corpus Christi, the Japanese animation Weathering With You and a new re-release of Fellini's La Dolce Vita. I'll also be buying a ticket for Guy Ritchie's The Gentlemen, as I was unable to attend the only press screening.