Exhibition: You are the dancing queen! 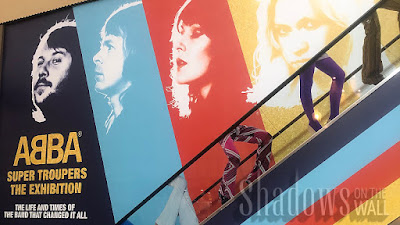 Like a trip back to the 1970s, the Abba: Super Troupers exhibition is running at the O2 until the end of August 2020. It's a lively, colourful romp through the history of the iconic Swedish band, exploring how its style and sound developed. Intriguingly, it also calls for a more serious exploration of the group's impact on world music, putting its achievements into context with what was happening around the globe. And with the right kind of crowd, this is the kind of museum that encourages you to get dancing - indeed there's both a full-on disco space in the middle, plus a large concert dance floor at the end. (Alas, I saw it with lots of rather subdued press very early on a Thursday morning.) 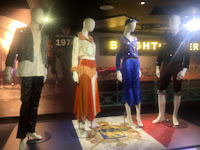 The first room sets the scene: Britain in 1974, which is when Abba broke out of Sweden with a glittery flourish at the Eurovision Song Contest in Brighton (Waterloo won). Intriguingly, this was also a time when Britain was dealing with years of austerity and big questions about Europe. From here we travel back to the four bandmates' childhoods and solo careers, their first album Ring Ring (when they were called "Björn Benny Agnetha Frida") and how they developed both the name Abba and that trademark backwards B. 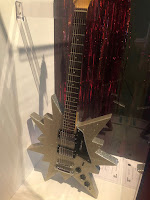 Each room centres on one of their albums with enormous cover art, plus clothes, props, studios, stage sets and even a helicopter from the Arrival cover art. Of course, Waterloo is accompanied with a special Eurovision stage re-creation (including the costumes and star guitar from Brighton, pictured here). The working disco is in the Voulez-Vous room. There's also a look at Abba: The Movie (which was released alongside Abba: The Album). And the final studio album, 1981's The Visitor, offers a jolt of melancholy as their marriages had failed.

Onwards, there are gold and platinum records galore, plus a full-on recreation of superfan Andrew Boardman's Manchester home jam-packed with memorabilia. And before you get to the gift shop, an enormous concert room projects memorable moments from their performances with plenty of space to throw some shapes and sing Thank You For the Music at the top of your lungs.

This is a beautifully curated exhibition, presented in association with Abba: The Museum in Stockholm. It's packed with historical and cultural treasures, interview material, imagery and evocative items, all described on a ludicrously jam-packed audio guide (included with the price of admission). More than a trip down memory lane, it's a reminder of why Abba's music still has such a powerful hold on us. You'll wish you'd worn something just a little shinier.

A few more pics on Insta...


Enjoyed tripping back to the ‘70s for the #Abba #SuperTroupers exhibition at the O2 - running now until August #dancingqueen #knowingmeknowingyou #aha
A post shared by Rich Jack Cline (@ukcline) on Dec 9, 2019 at 2:51am PST