Stage: Your wit's too hot, it speeds too fast 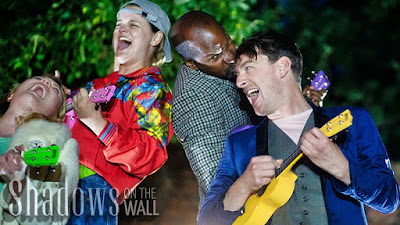 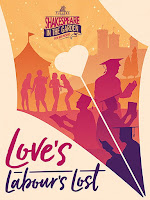 Shakespeare's offbeat romantic comedy is given a lively farcical touch by the Open Bar Theatre Company, as four intrepid performers take on a rather large number of characters with the help of an audience member and two balloon-head puppets. Stir in a few songs and lots of physical mayhem, and it's a perfect show for a pub garden on a summer evening. It's also remains thoroughly enjoyable even in stretches when the wordy dialog becomes impenetrable. As the actors remind us, this is show features Shakespeare's longest word, longest speech and longest scene.

The plot is a knotted mess, as the King of Navarre swears an oath with his three friends to devote all their energies to their studies for three years. This includes avoiding all women. Of course, the moment they all take their vows, the Princess of France arrives with three beautiful ladies in waiting. And the four men set out to secretly woo one woman each. Meanwhile, the Spaniard Don Adriano has his own convoluted romantic entanglement with the country wench Jacquenetta. What follows involves misdelivered letters, concealed identities and lots of subterfuge. 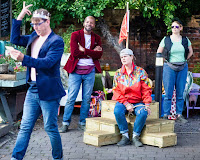 With just four actors playing at least three roles each, it's fairly impossible to keep up with the messy plot threads, so the best bet is to order some food and drink from the pub and just sit back and enjoy the silliness. These four actors are enormously charming and seriously skilled, adopting quick costume changes along with full-on physicality to create each character, all while singing, dancing and literally running in circles for a couple of hours. Each one engages hilariously with audience members and throws in improvised asides that add current commentary as well as in-the-moment gags.

With the actors gleefully swapping genders along with their costumes, this production is able to offer a gently queer spin on Shakespeare's playful exploration of masculinity. And the amusingly chaotic plot and surprisingly thoughtful ending add a thematic kick about the dangers of indulging in fantasies or rushing into promises that can never be kept. So even when the play itself isn't particularly funny, Open Bar succeeds in its mission to keep the audience laughing, and often happily sighing as well.

Open Bar also has a production of As You Like It touring in Fuller's pubs. For full information about both shows: SHAKESPEARE IN THE GARDEN > 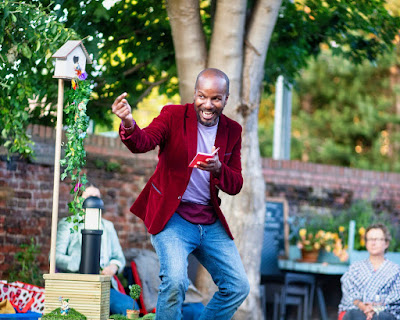