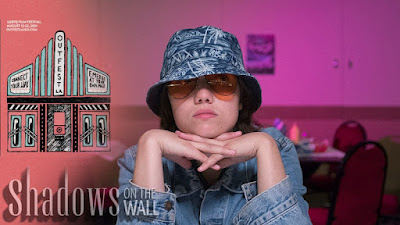 Each year as Outfest takes place in Los Angeles (this year a little later than usual), I get sent links to view some of the films that are part of the programme. And I also discover that there are several films I've already caught at other festivals. Outfest is one of the leading LGBTQ+ festivals in the world, and if features some great movies from top filmmakers. Here are short comments about seven terrific features with links to the full reviews on the site, starting with one of my favourite films of the year so far...

Sweetheart
dir-scr Marley Morrison; with Nell Barlow, Jo Hartley 21/UK ****.
Packed with jaggedly witty observations, this British comedy gets into the mind of a teen who thinks her life couldn't get any worse. Writer-director Marley Morrison tells a hugely engaging story about a character brought to vivid life by gifted actor Nell Barlow. The pacing may meander in the middle, but this is a breathtaking feature debut, and one of the most astute movies about adolescence in recent memory... FULL REVIEW >

Jump, Darling
dir-scr Phil Connell; with Cloris Leachman, Thomas Duplessie 20/Can ****.
This comedy-drama centres on a luminous, no-nonsense performance from the late Cloris Leachman, a lead role that feels like a gift. Writer-director Phil Connell tells an engaging story about people who find inspiration at opposite ends of their lives. While invoking the spirit of Hedwig as these defiant people refuse to be put into boxes, this is a complex celebration of how empowering it is to be honest with yourself... FULL REVIEW >

Firstness
dir-scr Brielle Brilliant; with Tim Kinsella, Allex Jording 21/US ****
Drenched in New Mexico sunshine, this offbeat drama takes a refreshingly open-handed approach that's easy to engage with. With her first feature, writer-director Breille Brilliant takes a premise that could easily seem a bit creepy and makes it something affirming and almost inspirational in the way it celebrates the wonderful variety in human expression. It's a disarmingly gentle film that challenges us without even a moment of preachiness... FULL REVIEW >

Firebird
dir Peeter Rebane; with Tom Prior, Oleg Zagorodnii 21/Est ****
Based on a true story, this Cold War drama traces a romantic triangle in a Russian military setting. Director Peeter Rebane keeps the focus on the characters as they navigate a perilous situation, pulling the audience into the story. This adds vivid personal emotions to the visually stylised filmmaking, and also adds wider resonance. Some earthy grit might have helped, but the film is strongly engaging and very moving... FULL REVIEW >

Potato Dreams of America
dir-scr Wes Hurley; with Tyler Bocock, Marya Sea Kaminski 21/US ****
Heavily stylised and hugely imaginative, this coming-of-age story unfolds with offbeat insight and witty observations. Expanding on his 2017 short doc Little Potato, writer-director Wes Hurley depicts his own experiences with cleverly inventive imagery, using a mix of stage-like sets and real-world locations. And the sparky characters are full of life, adding to the film's brisk pace and warm-hearted approach to topics that shouldn't actually be controversial at all... FULL REVIEW >

Knocking
dir Frida Kempff; with Cecilia Milocco, Albin Grenholm 21/Swe ****
Cleverly shot with a focus on thoughts and feelings, this Swedish thriller has a slow-burn quality that inexorably pulls the audience into its web of unnerving fear. Director Frida Kempff, writer Emma Brostrom and actor Cecilia Milocco take us deep into the mind of an unhinged woman who feels that something around her isn't right. And she seems so convinced about it that she pulls us into the mystery... FULL REVIEW >

I've also caught up with a few Outfest shorts at other festivals...