Stage: Be yourself tonight 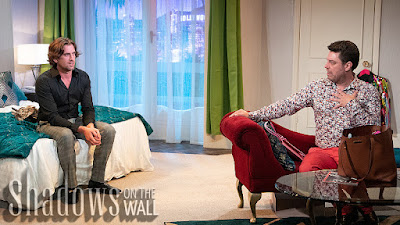 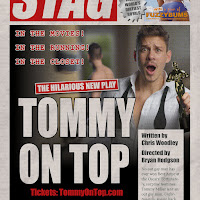 With a blissfully silly sense of humour, this farcical comedy is nonstop entertainment that's guaranteed to put a smile firmly on our face. And along with a stream of raucous double entendre, amusingly foul-mouthed dialog and physical slapstick, there's a sharp underlying theme that leaves us with something to think about later. This is another first-rate production from the talented team at Above the Stag, a snappy play staged with colourful flair an attention to detail.

The mayhem centres around Tommy (Hulme), an actor nominated for an Oscar for his lead role in the independent film Splash Mountain. In his Hollywood hotel room, he's preparing for the onslaught of red carpet media attention while also planning something special for the birthday of his stylist boyfriend George (Livesey). Then his hard-partying sister Molly (Armstrong) arrives, as does Tommy's attention-seeking agent Eddie (Lane), who wants him to remain closeted for the sake of both the Oscars and his future career. So Tommy decides to court high-profile agent Judy (Amofah) instead. But gossip blogger Kiki (Sanneh) is digging into rumours that Tommy might not be as straight as he claims to be.

Jokes come at a furious pace throughout the show, with goofy punchlines, lacerating satire, asides to the audience, outrageous physicality and some hilarious technical gags. All of the cast members dive fully into the melee, with scene-chomping roles for both Lane and Armstrong. Eddie is a predatory slimeball, constantly ranting about everything to a room full of people who loathe him. That Lane makes him loveable is no mean feat. And Armstrong has the most crazed role, as Molly exuberantly makes everything better and worse at the same time.

At the centre, Hulme's Tommy is sympathetically hapless, keeping the show grounded with his hangdog expression and on/off costumes. His scenes with Livesey are perfectly pitched to provide soulful romance with a witty bite. And both Amofah and Sanneh add some razor-sharp edges. Another star of the show is the lighting (by Joseph Ed Thomas) and sound (by Paul Gavin), cleverly deployed by director Hodgson to inventively punch the comedy to even higher levels.

While the general chaos on-stage makes the story feel a bit rushed, it also means there's never a dull moment. The cast and crew pack an astonishing amount of wordplay, sight gags, full-bodied farce, theatre references and rude surprises into the relatively brisk run-time. And it ends with a heartfelt plea for honesty and acceptance that feels urgent at a time when so many major movie stars are unable to be truthful about themselves in public.
29.Jul.21 • Photos by PBG Studios
Posted by Rich Cline at 15:05