Performance: A field in England 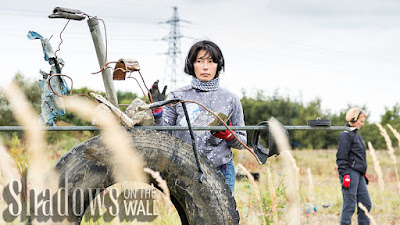 What's described as an "immersive performance through headphones" is actually quite a lot more than that, as it puts the audience right in the middle of the show. We work alongside the artists to create everything that happens, while audio input encourages us not to miss the deeper personal meanings. So taking part is fascinating, unexpected and moving.

The event takes place in East London at the end of the day, as the sun sets over the City. We're standing in a disused open space, paved over as a car park perhaps for the Olympics nearly a decade ago and abandoned shortly afterwards. And with the construction going on all around the Olympic park in Stratford, it's obvious that developers have their eye on this piece of land, so the chance to roam around it is specific to this time.

Entering the site, we're given workman's gloves and headphones, and told to select an object to carry with us from a collection of broken, thrown-away things. A pin cushion seemed to shout out at me from my childhood, so that's what I picked up. Headphones on, the 50 or so people are guided to create a perimeter on two sides of the lot, then to walk into the middle, stop, turn, walk some more and have a good look, selecting a spot to place our object.

Soon things get much more complicated, as we are encouraged to explore areas of interest, to walk in specific directions, spin around and move. Eventually it becomes clear that not all of us are getting the same instructions, as we wave arms to form a smaller tribe that is given a specific job. My team uses found objects to create rope-and-stick fences and to build more elaborate walls. Others are carrying long sticks or constructing towers. As a whole group, we come together and split apart, form a huge circle, lounge on the ground watching a performance above us, walk under a floating sail, and end up with hot chocolate and biscuits around a fire as the darkness creeps over us.

Through all of this, the cast members both blended into the group and carried out their own busy work, enabling our projects while also putting on a beautifully physical dance performance of their own. Being involved in this was sometimes experiential overload. Occasionally the instructions were unclear, creating confusion that was resolved by relying on teammates. Some of the stop-and-look moments felt indulgent, but they offered a chance to breathe and consider the large scale of what was happening before the next activity. And in the end there was a hushed sense of participatory accomplishment. The meaning might be opaque, but it's also distinct for each person involved. And the cumulative feeling is powerful.