Stage: The gardens of love 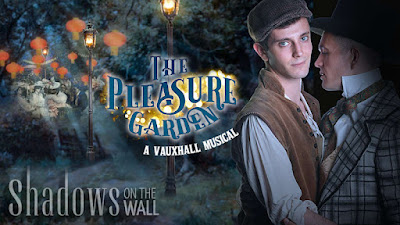 The Pleasure Garden
by Glenn Chandler
music Charles Miller
dir Fenton Gray
with Sam Baumal, Jay Worley, Rory-Charlie Campbell, Ashleigh Harvey, Jennie Jacobs, Bea Amora Wong, Steve Watts, Jonathan Harlaw
Above the Stag Theatre, Vauxhall, London • 15.Sep-17.Oct.21The adept team at Above the Stag are back with a new musical for the autumn season, blending light comedy with darker drama. Set where the theatre sits today in Vauxhall, but nearly two centuries ago, the show highlights both the vast differences in London's landscape as well as similarities deeper in the culture. The idea of a fading society caught up in bigotry and war are eerily familiar, which makes the show's mix of comedy and melancholy a bit of a challenge.

It's the 1850s, and Vauxhall Pleasure Gardens has been one of London's leading entertainment venues for nearly 200 years, with acres of cultivated trees and flowers, including some overgrown areas favoured by those looking for a romantic hideaway. Meanwhile, public performances draw in crowds to watch musicians, circus acts and fireworks, plus rides in hot air balloons and military re-enactments, all of which are part of this story. But from the 1840s, the owners struggled to make the park financially viable, and its days are numbered.

Among those wandering through the trees are Ralph (Jay Worley), a well-dressed clerk who catches the wide-eyes of soulful gardener Tom (Sam Baumal). As their romance blossoms, Tom gets a job offer he can't refuse from the leery Lord Roger (Rory-Charlie Campbell), whose wife Lady Maude (Ashleigh Harvey) has begrudgingly been living with his inability to resist temptation. Also roaming around the park and becoming entangled in this story are two people concealing their true identities: young Captain Antrobus (Jennie Jacobs), who is preparing to head to the Crimean War, and the lively performer Princess Saura (Bea Amora Wong).

There are some terrific comical touches along the way, mainly in Lady Maude's riotously funny asides. Accompanied by excellent on-stage musicians, the songs are peppered with witty wordplay and lots of innuendo, even as the show retains a prudish sense of Victorian morality. And the sets are nicely designed with colourful video imagery and inventive effects work. So it feels strange that the story and tone are so gloomy and never remotely sexy. This awkward mix undermines the romance between Ralph and Tom, leaving it feeling strangely unresolved from the start.

The cast members give it everything they've got, and are terrific at adding little touches of emotion and humour in just the right places. They also sing beautifully, often with full-voiced power. The likeable Worley and Baumal have chemistry together, although the direction never exploits it. Campbell and Harvey steal the show with their amusing antics. And Wong has terrific presence in a complex role. Less effective is Steve Watts as a range of side characters; his French officer is enjoyably blustery, but his hermit never quite feels like part of this story.

While the strong issues around identity are carefully woven into the narrative, the show is framed with telling present-day scenes that briefly touch on the current construction boom in the area, where blocks of flats are being built as investment properties for Russian and Arab billionaires, sucking the life out of the community. Perhaps a bit more development of these themes, as well as a little more joy in the love stories, might have given the plot and characters a more jaunty kick.