Critical Week: Me and my shadow 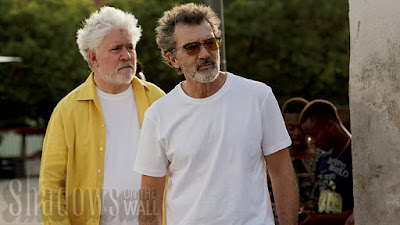 It's been a busy week at the movies, with three much-anticipated press screenings. The best of the lot was Pain and Glory, which reteams writer-director Pedro Almodovar with actor Antonio Banderas (above) for a remarkably intimate, lushly produced exploration of cinema and creativity. I also really enjoyed Quentin Tarantino's ode to the heyday of 1960s cinema with Once Upon a Time ... in Hollywood. The cast is excellent (anchored ably by Leonardo DiCaprio and Brad Pitt), and Tarantino feels effortlessly in control of the story through each astonishing sequence. And then there was Fast & Furious: Hobbs & Shaw, the franchise spinoff starring Dwayne Johnson and Jason Statham. It's just as noisy and packed with action as you'd expect, and a lot funnier too.

Being the summer, there were three animated movies as well. The biggest is The Angry Birds Movie 2, which carries on in the same goofy style as the original, mixing chaotic slapstick with deranged adult-aimed humour. Charming is a decently animated low-budget Canadian production with a great premise that starts out undermining the fairy tale genre before giving in lazily to every cliche. Leo Da Vinci: Mission Mona Lisa is an Italian-Polish production that looks rather cheap, but has a certain charm as it sends the teen inventor on a ridiculous treasure hunt adventure.

Foreign films included The Operative, a quietly tense German-Israeli production starring Diane Kruger and Martin Freeman. From Spain, The Candidate is a fast-paced labyrinthine political thriller with a clear-eyed perspective on endemic corruption. The French-German drama Transit sets a WWII story in modern-day Marseilles. It's finely produced and acted, but strains to connect the eras. And from Argentina, End of the Century is a twisty personal drama set in Barcelona, where two men remember meeting before. What follows skilfully plays on both memory and expectations.

There will be more family-friendly summer movies this next week, with the adventure Dora and the Lost City of Gold, the Kevin Costner comedy The Art of Racing in the Rain, and more animation with both UglyDolls and Asterix: The Secret of the Magic Potion. Other films include Shia LaBeouf and Dakota Johnson in The Peanut Butter Falcon, the spy thriller Ecco and the horror movie Wicked Witches.
Posted by Rich Cline at 21:53