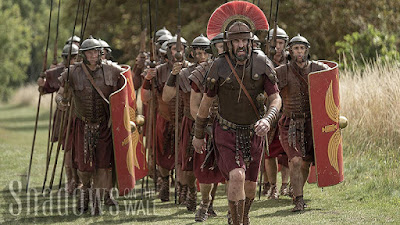 It's the hottest week in Britain since record keeping began (a couple of hundred years ago), so sitting in a cool cinema is a nice alternative to my sweltering home! We had a press screening of what is likely to be this week's biggest new movie: Horrible Histories: The Movie - Rotten Romans, which transfers the popular book and stage series to the big screen with an all-star cast of British comics (Lee Mack is leading the charge in the pic above). The film is resolutely silly, like a family-friendly variation on the classic Carry On romps. It's also very funny, and actually recounts some real history.

There were a couple of highbrow indies: Sienna Miller and Christina Hendricks are terrific in American Woman, a grim slice of working-class life that's beautifully shot and played. Tye Sheridan and Jeff Goldblum make an offbeat duo in The Mountain, a surreal and very dark drama about mental illness and social failings. From Mexico, The Chambermaid is a riveting drama about a hotel cleaner in which very little actually happens. Arthouse audiences will love it. And from the Netherlands, Dust is a sensitive, gritty teen drama that takes a hard look at an awkward coming-of-age. There was also this doc...

Unveiling the most notorious secret society, this documentary is so over-serious that it's both dry and borderline comical. But it's packed with resonant detail. Featuring to-camera interviews with a variety of historians and experts, the film is an eye-opening journey into this unseen world, including re-enactments of its initiation rituals and secret handshakes.

The Illuminati was founded in May 1776 in Bavaria by Adam Weishaupt to improve humanity by accelerating the Enlightenment, deeply Christian but opposing superstition, church influence in government and abuse of state power. Weishaupt is an intriguing figure, and the film dives into his background, as he read forbidden books that explored the dangers of giving too much power to the Catholic Church, which suppressed ideas that threatened its authority. Weishaupt was the first non-Jesuit allowed to teach law at Ingolstadt University, so he made a lot of enemies. His goal was to develop intellect, striving for perfection on earth (he originally called the group the Perfectibilists). By combining elements of Freemasonry the movement spread, and the film covers key turning points until the group was dissolved in 1785 due to internal divisions and official opposition. Oddly, the film never mentions how the Illuminati excluded Jews and women, leaning toward wealthy, young, pliable men. But they also promoted equality among classes and forbade slavery.

Filmmaker Johnny Royal narrates in a flat voice, while filling the screen with lushly produced slow-motion dramatisations of a variety of creepy rituals in candle-lit rooms. Combined with the articulate interviewees, this helps the film feel like more than merely a reading of the Wikipedia page. Details about rival secret societies are hugely intriguing, including the way the Freemasons (not the Illuminati) established the United States. Indeed, conspiracies today ignore the real history, conflating various secret orders. Instead, it's the big philosophical ideas and the historical narrative that make this film gripping.

Coming up this next week, we have screenings of Quentin Tarantino's Once Upon a Time in Hollywood, the Fast & Furious spinoff Hobbs & Shaw, Pedro Almodovar's acclaimed Pain & Glory, the Spanish political thriller The Candidate, the French-German thriller Transit, and two animated movies: the sequel The Angry Birds Movie 2 and the fairy tale Charming.
Posted by Rich Cline at 10:32