Outfest: Make your mind up 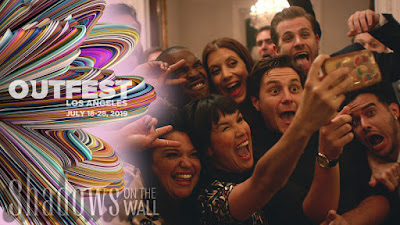 I've had a chance to remotely cover a few titles from this year's Outfest, which is running in Los Angeles until next Sunday. It's always great to be able to keep up with festival films from a distance, and these movies grapple with big issues in ways that are funny, emotional and challenging. Here are three blurbs linked to full reviews, plus longer comments on a British doc...

Sell By
dir-scr Mike Doyle • with Scott Evans, Augustus Prew, Kate Walsh 19/US ***.
This gentle ensemble comedy circles around a group of 30-something characters who are struggling with romantic issues and life plans. Writer-director Mike Doyle gives the film a flippant tone, revealing how people use acerbic humour to cope with problems. The central question is whether all relationships have a sell-by date, and while the story structure feels more than a little predictable, the endings at least feel nicely organic... FULL REVIEW >

Cubby
dir Mark Blane • with Mark Blane, Joseph Seuffert, Christian Patrick 19/US ***.
"Based on a lie", this black comedy recounts the offbeat adventures of filmmaker Mark Blane when he moved to New York. It's a quirky, personal little film that unfolds with its own rhythms and themes. This makes it tricky to identify with, even if the characters remain engaging and intriguing. The way things develop may be stylised and often downright askew, but it's underscored with a sense of honesty...
FULL REVIEW >

Label Me
dir-scr Kai Kreuser • with Renato Schuch, Nikolaus Benda 19/Germany ****
Dark and thoughtful, this German drama is beautifully understated as it explores the complexities of identity for an immigrant who is afraid to let anyone see who he really is. Within a brief running time, writer-director Kai Kreuser maintains a tight focus on the shifting balance of power between two central characters, wasting no time on melodrama or the usual gyrations of plot structure...
FULL REVIEW >

The title of this involving narrative documentary refers to the fact that male seahorses carry their unborn young. As he approaches 30, the articulate, charming Freddy McConnell decides to stop testosterone treatment and give birth to his own child. He understands the emotional and physical ramifications of what lies ahead, and he knows he has the support of his entire family. He originally plans to have the child with his close friend CJ, who is also trans, but ends up on his own, relying on help from his mother as he goes for ultrasound scans, deals with morning sickness and, ultimately, childbirth. Freddy is a deep thinker who has worked out his identity as a gay man, even though he knows people find that complicated. But pregnancy makes him feel like an alien, like he has violated his own masculinity. He also has to face harsh criticism online, and also among his relatives. And the process prompts him to try to mend his strained relationship with his father.

The film is fluidly shot and edited, taking a quick-paced and natural journey through the story as Freddy copes with the changes to his body and keeps his eye on his goal of becoming a father. The details are often astonishing, especially as they carry such a strong emotional impact, right to the powerfully moving water birth. Filmmaker Jeanie Finlay takes a bracingly honest approach, never shying away from anything while remaining sensitive to the nuances of Freddy's situation. She also clearly relaxes Freddy and his family as they so openly share their thoughts and feelings with the camera. Home movies offer lovely, telling glimpses of Freddy's childhood with his sister and parents, who understood early on what was going on with him. It's fascinating to watch him go through a box of childhood mementos, including his crushes on masculine actors and his early avoidance of his given names. The journey he takes through pregnancy brings a continual stream of surprises, And the film's most powerful element is the way it presents Freddy's odyssey as utterly normal, even if it's also exceptional.

THE GARDEN LEFT BEHIND
dir Flavio Alves
19/US ****
FULL REVIEW >