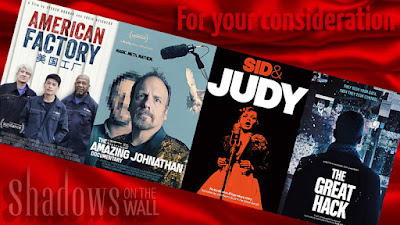 Catching up with movies as award season cranks up, this time four acclaimed documentaries. The field of docs is overwhelming this year, and it's simply impossible to watch everything...

A fascinating exploration of both the world's new financial reality and a collision of cultures, this documentary astutely explores the differences between Americans and Chinese workers in a multinational corporation. Even if it's somewhat overlong, the film is strikingly well shot and edited to highlight differences as well as to find the common humanity. Filmmakers Steven Bognar and Julia Reichert capture this without commentary, including some remarkably emotional moments. And it becomes profoundly important as it focuses on personal perspectives about both changing ways of working and the larger shift in the global economy.

The film opens in December 2008, as GM closes a plant in Ohio, losing 10,000 jobs. Eight years later, Chinese corporation Fuyao reopens it as an automated glass factory, with 2,000 non-union jobs that pay less than half as much as the old ones. As they prepare to move to Ohio, a team of Chinese workers is tutored in American culture; workers from both countries are paired on the factory floor. The film follows a variety of employees as they face this new reality. Many of the locals have never recovered from the plant's closing, having lost their homes. Meanwhile, the Chinese are far from their families, struggling with high expectations and an often incomprehensible culture. Contrasts abound: when American supervisors visit China they are shockingly casual in the meetings (one wears a Jaws t-shirt) and deeply impressed by the efficiency on the line. And after Fuyao's smiling workers perform elaborate company-praising musical numbers, the Americans dance to YMCA.

It's great to watch the Ohioans bond with their Chinese colleagues, offering new experiences like a Thanksgiving meal or the chance to fire a gun. Meanwhile, the bosses are furious when US Senator Sherrod Brown mentions worker's unions in his grand opening speech, worrying that a union will reduce efficiency so much that they'll be forced to close down. The tension between quality, safety and corporate targets is relentless. The Chinese blame inefficient American workers who complain too much, want more than two days off per month and constantly threaten to unionise. But safety is a serious issue, and Chinese bosses blame their American managers for failing the company. So even though there's mutual understanding on the floor, the threat of unionisation sparks a ruthless crackdown. So in the end, this is a fascinating, nuanced depiction of the struggle to bridge the gap between arrogance and overconfidence.

As the Amazing Johnathan, Szeles is a standup comedian and magician known for his outrageous performances. Then at the top of his career in 2014 he was told he had a year to live due to a heart condition. Three years later, he sets out to make a documentary with Berman as he tries to figure out what to do with the time he might have left. So off they go on a comeback tour around America. Although things get a bit complicated when Szeles allows a second documentary crew to tag along. And then Berman learns that another documentary was already in the works before he came along.

Berman lets the story unfold with real-life messiness, as each discovery threatens to derail his project. With a story that's just as involving, Berman is struggling with how he can make this doc stand out from the others, so he weaves in his own life story, complete with home-movie flashbacks. This loose, freeform style makes the film thoroughly endearing, and it also fits well with Szeles' chaotically unplanned approach to taking life as it comes. Indeed, Szeles lives one day at a time in Las Vegas with his wife Anastasia, never doing anything he doesn't want to do. Being preoccupied with his health, it's difficult to concentrate on working. "I'm not supposed to be here," he says, as he comes out of retirement and starts work on a new show, visiting venues he played 20 years ago. He does worry about possibly dying on-stage, but then much of his show consists of him pretending to mortally wound himself.

Clips of his outrageous magic act punctuate the film, intermingled with segments that, for example, follow Szeles back to his childhood home in Detroit. Home videos follow him into his past, including partying and ongoing drug use. Berman cleverly includes footage he knows he shouldn't, pixelating people who don't want to appear on screen and putting black-out boxes to obscure, for example, Szeles' drug use. A witty sequence involves Szeles offering to appear on camera smoking meth if Berman joins him. Berman's struggle to discover the soul of his film adds a fascinating layer both to the documentary and to Szeles' story. One larger question is whether he should ever trust a magician, and this leads the doc itself down a new narrative path that provides a fascinating look at art, perception and the nature of truth.

By using real recordings and in-character dramatised memoirs for voiceover narration, this documentary recounts the story of Judy Garland and Sid Luft with remarkably intimacy. Never shying away from the darker side of their life together, the film feels unusually honest for an exploration of such an icon. It also features a fantastic range of never-released behind-the-scenes material.

The film traces the 13-year romance between Luft and Garland, who met as her marriage to Vincente Minnelli was collapsing, and it also flickers back through Garland's life to chronicle her from birth to death. Along the way, filmmaker Stephen Kijak includes terrific audio recordings made by Garland herself, recounting her story. And of course there's also a wonderful collection of archival footage, stills and animated sketches, including extensive clips from her movies and snippets of iconic songs. One electric sequence weaves together multiple variations on The Man That Got Away from A Star Is Born (1954).

Garland recalls going into show business at age 2, and never stopping. Luft recounts the constant studio pressure that included strict dieting and amphetamines to make sure she maintained the desired energy level. She went through rehab, but the pressure continued, and she attempted suicide. At 28 she had been owned by the studio for 15 years, and they released her from her contract. Later, the TV network was threatening to cancel The Judy Garland Show because of her substance abuse, while Luft tried to hold her together.

The doc traces the personal events in their lives with bracing honesty, including some remarkably moving moments, plus harsh episodes including Garland's abuse by studio heads and a variety of managers. The film also captures her relentless sense of humour. And each sequence is punctuated beautifully by music, often with gorgeous rare recordings. Most intriguing is how the film traces how Garland's legend grew up around her, with each personal setback followed by another triumphant performance. And seeing this through Luft's and Garland's eyes, in their own words, is magical.

Beautifully shot and edited, and packed with clever effects that bring out deeper ideas, this chillingly detailed documentary explores how data from our online activity has turned us into a commodity without us even knowing who is mining our details. The problem is that this creates an individually filtered reality that's removed from what's actually going on in the world, playing on fears and apathy. And this has handed power to disruptors and the wealthy who profit from tyrants. For evidence, see the organised-but-invisible campaigns of propaganda and disinformation backing Trump, Brexit and other supposedly democratic movements around the world.

As New York professor Carroll notes, the online world has become our matchmaker, fact checker, personal entertainer, guardian of our memories and even therapist. All of our interactions, credit card payments, searches, movements and even the clicks themselves are linked together to create a virtual version of ourselves that is used to target us with content. Project Alamo spent $1 million per day on Facebook ads to get Trump elected, based on  information from Cambridge Analytica, which had at least 5,000 data points on every voting American. The film documents how their stated aim was to target us with specific information to make us see the world the way they wanted us to see it, and to change our behaviour. Trump's campaign ran nearly 6 million targeted ads on Facebook (compared to Clinton's 66,000). And the Leave EU campaign in the UK did exactly the same thing. As did the Blue Lives Matter movement. And Bolsonaro's campaign in Brazil. And so on.

The film is superbly assembled with a strong narrative flow, as Carroll seeks to find out what data Cambridge Analytica has collected about him. The story is beefed up by investigative journalists Cadwalladr and Hilder, who connected the dots and broke the story. And former Cambridge Analytica employees who blew the whistle on illegal data collection are articulate and honest, including Kaiser, Wylie and Dehaye. Kaiser is a particularly complex case, a human rights activist who struggles to admit what her work did to the world.

It's deeply shocking to see how these companies worked behind-the-scenes to manipulate millions of people, using immoral methods that were often also blatantly illegal. Defining these methods as psy-ops is eye-opening: this is information warfare, and it's going on literally everywhere. The hard truth is that we don't own our own data, and it can be used against us at any time. The scary result of this is that there may never be be another free and fair election anywhere in the world, because it's the richest, strongest, most ruthless campaigns that wield this power. And it will only get worse, and more insidiously underground, until we can legally own our online selves.