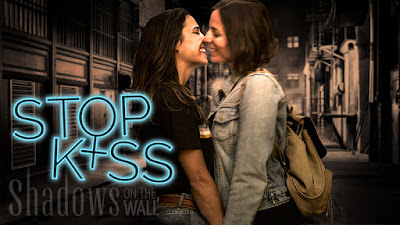 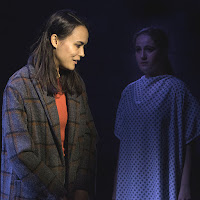 Originally staged Off-Broaway in 1998, this topical play has new resonance in today's intolerant times. More than 20 years later, the story still echoes in headlines, which is more than a little unsettling because society is failing to address deep-seated bigotry. This is a beautifully written piece, tackling the issue with a clever narrative that never lets it get too pointed; instead, it's an engaging, personal drama that feels hopeful as well as haunting.

Set in New York City, it centres on Callie (Boreel), who reaches out to Sara (Alberts), a friend of a friend who's new in town. Sara has won a fellowship to teach in a rough state school in the Bronx, which horrifies Callie, who fell into a job as a traffic reporter. From here, the timeline begins to scramble, revealing a chain of events as these two young women get closer and closer, leading up to and then following on from a fateful first kiss on the street at 4am. This also involves Callie's friend-with-benefits George (Gayle) and Sara's ex Peter (Webster), as well as a detective (Brewer) an a nurse (Crankshaw) who step in after a violent assault.

Director Rafaella Marcus stages this ingeniously in the studio space at Above the Stag, using depth of field to place settings in front of each other. It's a simple trick that allows the characters to step between various scenes out of chronological order, creating a tightly involving narrative that's punctuated with powerful insight. The stage is unfussy, with some strong detail, clever lighting and a nice sense of interaction with the surrounding audience. So even if much of the raw emotion exists between the scenes, the cast members are able to mine the earthy, realistic dialog for subtext.

This allows the play to become much more than a story of a homophobic attack. It's a look how all of us have been conditioned to follow the status quo, so when removed from the pressures of family and childhood friends we are allowed to discover who we really are. There isn't a weak link in the cast, so each of the characters feeds into this idea, with fully rounded personalities and interaction expressed through offhanded words and physicality. Writer Diana Son inventively finds a way to navigate this pungent plot to avoid melodrama or preachiness, so where the story goes is thoughtful and provocative.