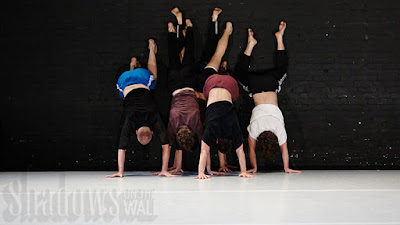 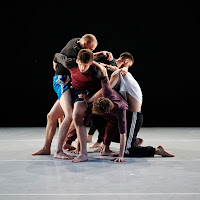 A provocative exploration of physical interaction, Joe Moran's dance choreography continually challenges the audience with its shapes and spaces. There's no music, so the performance often resembles a sporting event, especially with the gymnasium-like atmosphere in the Lilian Baylis Studio. And in Arrangement, the six male dancers are dressed in sports-casual wear (with some added nightclub touches like mesh shirts and a leather kilt). The one-hour performance is broken into a series of shorter pieces that work together on a thematic level to subvert stereotypes about masculinity.

One section feels like a rugby scrum, as the men push both against each other and into each other, forming a knot of limbs straining in tension. And then there's a witty dance on their hands as they jostle for position against the back wall. At other times, they are working together, forming a sort of six-man ball rolling across the stage toward the audience. The most effective sequence is more like an athletic game, as one man dances and the others try to stop each other from pushing him into various positions. And some of it feels remarkably free-form, as each dancer performs his own piece, eerily echoing each other with repeated movements. 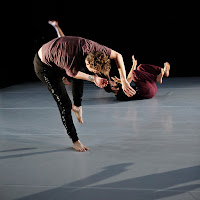 Through all of this there's a cheeky sense of interaction with the audience, including an amusing section in which the dancers take turns standing centre stage for an improvised Q&A session that takes a few unexpected turns. This is not the kind of piece that makes its themes obvious, but there are big ideas swirling everywhere, pushing viewers to examine preconceptions about physicality, interaction and the way men, specifically, are expected to contend against each other on various planes, and also work together to create something remarkable.

The hour-long Arrangement is preceded by the 12-minute Decommission, featuring the remarkably athletic Temipote Ajose-Cutting, whose demanding performance cuts across moments of complete blackout. It also features several extremely long-held poses that require unusual strength and calm, commenting on the limits of the body while playing with ideas of space, time, weightlessness and, yes, patience.