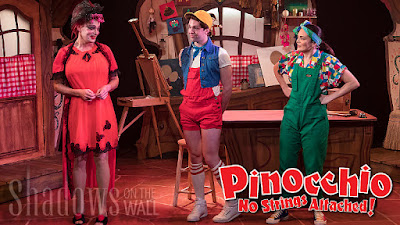 The 11th holiday panto produced by Above the Stag is another impressive production, with witty staging, a lively script, terrific songs and a cast that's expert at milking every bit of innuendo for all it's worth. That said, the show sometimes feels like it plays it a bit safe, relying on reliable old gags instead of inventing something new. But the performers keep it fresh and often raucously entertaining. In fine tradition, the familiar storybook tale has been twisted into something hilariously queer for an adult audience that's not afraid of rather a lot of rude double entendre.

In the Italian fishing village of Placenta, puppet-maker Gepetta (Baldwin), her sidekick Cornetta (Bellis) and their cat Chianti (Rawle) are in hiding, fugitives from a crime spree in Rome. But evil fox Figaro (Lane) suspects something is up with them. One night, part-fairy Fatima (Olukoya) brings Gepetta's puppet Pinocchio (Thompson) to life, telling him not to lie. Bullied at school for being wooden, he's tempted by a funfair on the edge of town, and also by new footballer Joe (Dickson), bought for the local team by Figaro. When Pinocchio runs away with Joe, Gepetta and Cornetta set off to find him, helped by lonely fisherman Pedro (Barragan), who has a thing for Gepetta.

As events progress, the soap-style romantic storylines are enjoyably tangled, boosted by the gender-bent mayhem. Characters are openly lusting after each other, resisting and then falling for each other and swearing like, well, fishermen. When Pinocchio lies, it's not his nose that grows. The actors dive in with gusto, playfully delivering the smuttiest dialog while deploying references to politics, current events and of course the Disney animated classic (including a sharp Jiminy Cricket gag). And each character gets a chance to break out in song and dance, numbers that are snappy and often laugh-out-loud hilarious.

With spotless timing, Baldwin is playing his seventh Above the Stag pantomime dame. He's gifted at engaging with audience members and improvising jokes that are just as funny as the scripted ones. He also generates some surprising pathos even in some of the more ridiculous moments, creating vivid connections with Bellis' sparky Cornetta and Barragan's adorable Pedro. Dickson is also memorable as the puppet come to life, putting in a remarkably physical performance that emphasises his dance skills. Lane has a ball as the predatory Figaro, never shying away from his smirking, gleefully leery nastiness. And Rawle is a gifted scene-stealer, amusingly riffing on quirky cat behaviour even when lurking in the background.

Above the Stag's original musicals are of such high quality that they'd play well on a West End stage. They fill this small venue perfectly, with inventive production design that sets off the various scenes. Four main sets are vividly imagined, plus a nicely deployed landscape-painted curtain. The sound is, as usual, a bit tricky, with quite a few punchlines inaudible in the back rows (there are only eight). But the energy is unmissable, and there's never a dull moment as these engaging characters take on this big Christmas-themed adventure with plenty of wickedly grown-up sass.