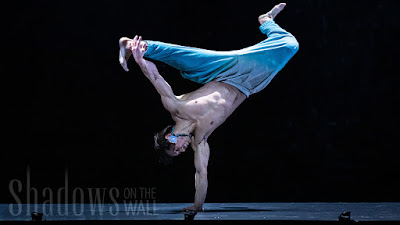 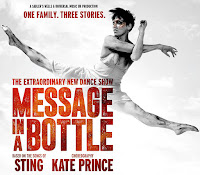 Ambitiously combining the music of Sting and The Police with issues surrounding refugee migration, this debut production is a definite crowd-pleaser, packed with great songs and a company of seriously talented dancers expressing themselves with eye-popping choreography that captures both the inner spirit and physical expressivity of the characters and situations. It's a powerful show, provocative and deeply moving, raw and beautiful. 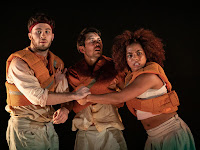 The story centres on three teens who are living happy, love-filled lives when their community is obliterated by military conflict. The survivors band together to escape, but are separated during their odyssey, taking distinct journeys that involve horrific treatment by officials, attempts to assimilate into new cultures, finding new love and surviving some darkly gruelling situations, such as human trafficking as a drug-addicted sex slave. Through all of this, the three central figures express their emotions in vivid ways that take the audience on a journey with them.

Sting's music bristles with political commentary, especially the songs from his 1987 Nothing Like the Sun album, which use their yearning, issue-tinged lyrics and world music beats to draw out underlying ideas and feelings. Other numbers feel more than a little on-the-nose, even contrived. And attempts to match lyrics to story or choreography elements are uneven. But the songs are gorgeously re-recorded, and Kate Prince's stylistically eclectic and physically demanding choreography brings out intense feelings, often seeming to suspend the laws of gravity as performers hang in the air, smoothly mixing street moves with classical ballet and modern dance. It's a visually stunning show, demanding a lot of the dancers, and they deliver with style, energy and a strong emotional kick.

There are several high points in the show, most notably Tommy Franzen and Samuel Baxter's duet to Shape of My Heart, which discovers an unexpected romance with a gorgeous blend of power and tenderness. Other moments are exhilarating or wrenching, carefully constructed to take the viewed on a swirling journey through the themes, staged with a wonderful sense of lyricism. Human migration is a vitally important issue, explored with beauty and a clear sense of righteous anger. And the grim ending finds a triumphant note that raises spirits even if it feels oddly false. Still, it leaves us thinking, and more importantly feeling what life feels like for displaced people. 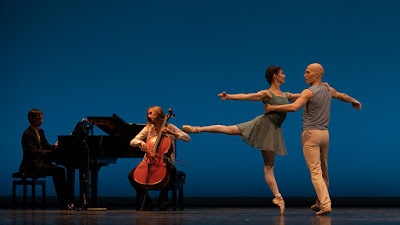 This enjoyable collection of classical and contemporary works is curated and performed by Alina Cojocaru, the Romanian lead principal dancer with the English National Ballet. It's a lively mix of music, dance and film layered with moments that are dazzlingly athletic, moving and even funny. To kick off, the evening opens with a dance between Charlie Siem's violin and Margarita Balanas' cello as they perform Handel's intricate, frisky Passacaglia.

This is followed by the more sombre Reminiscence, which Cojocaru performs with her partner Johan Kobborg in an evocative display of support, echoing, reflection and elevation. Cojocaru is simply magical on-stage, with her floating limbs moving with seemingly supernatural fluidity, always with the hint of a joyful smile ready to erupt. Journey is a three-part piece in which she is joined by Juliano Nunes and Dominic Harrison for a physically demanding, emotionally raw exploration of interaction that shifts and expands as it progresses, often taking the breath away with the use of balance and motion, choreographed beautifully to Luke Howard's music.

Les Lutins is the show-stopper, opening with the charismatic Marcelino Sambé interacting playfully with Siem and his violin before being joined by Takahiro Tamagawa for some cheeky one-upmanship, which shifts into witty rivalry when Cojocaru joins them. Kobborg's choreography is lightly gorgeous, as these three spiral around each other, echoing and expanding on each others' movements.

There are also lovely two short films by Kim Brandstrup, which offer even more intimate touches. Faces is an excerpt from a 2018 film, offering a chance to see Cojocaru close-up as she thinks through her movements. Kiev is a newly commissioned piece that follows Cojocaru back to the faded halls of the Kiev State Ballet School for the first time in 25 years, where she has a powerfully moving encounter with her former teachers. It's haunting and full of intensely internalised meaning. 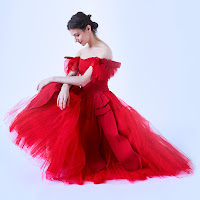 And finally, there's the classically staged Marguerite and Armand, complete with Cecil Beaton's glorious costumes. Frederick Ashton's iconic choreography to Liszt's swirling piano score is given a fresh, energetic kick in this colourful, vibrant performance, as courtesan Marguerite (Cojocaru) dreams of her young lover Armand (Francesco Gabriele Frola), who stands out among her many suitors. But as their romance blossoms, Marguerite is afraid to tell Armand that she is dying. No, it doesn't end happily, but it's achingly beautiful. 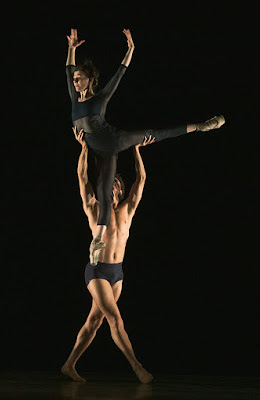 Thank you for sharing
https://aab-edu.net/