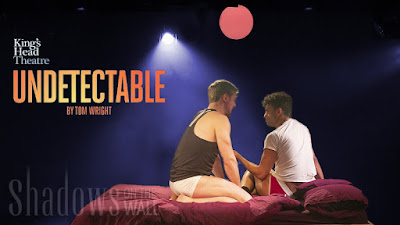 Taking a complex look at the difference between intimacy and sex, this provocative two-hander draws the audience into a constantly shifting dialog about the nature of connection. The fact that it's a gay couple adds several additional textures, but the topic has a remarkable universality that anyone can identify with. It also helps that the spiralling conversation includes moments that are warm, funny, sexy, wrenching and emotionally engaging.

Bradley and Lex (Brown and Hogan) have been going out for three months, and both are feeling that it's time to have sex for the first time. But each has issues from his past that are causing him to pause. These relate to feelings surrounding safer-sex and HIV, drugs and alcohol, past relationships and self-doubt, all of which come out as they talk to each other, taking turns on the offensive and defensive while also finding common ground. This includes an extended flashback for each man: Bradley revisiting his wildly drug-fuelled party days and Lex remembering a tragedy from his romantic past.

Sustaining a conversation over 90 minutes without a break is no mean feat, and director Beadle-Blair adeptly switches things up constantly, keeping these guys in motion. The stage is a raised bed in the middle of the theatre, surrounded by the audience. These two guys climb on it, run around it, hide behind it as they get into and out of their clothing and the bedding, revealing and obscuring themselves from each other. Clever lighting and music add to the atmosphere, never telling the audience what to think or feel but highlighting the issues these men are grappling with. And Wright's script never moralises at all, which is refreshing considering the potent themes.

Both Brown and Hogan deliver remarkably wrenching performances that evoke a wide range of emotions, from playful tenderness to full-throttle screaming, without ever becoming overwrought. Because the audience is so close to the actors, this kind of underplaying is essential to maintain authenticity, and both men create remarkably private moments surrounded by a crowd of observers. Their performances are also full-bodied, both physically and emotionally, often leaving them (and the audience) sweaty and out of breath. This makes the connection between them powerfully real, with genuine ripples of doubt about where the relationship is headed, offering some proper suspense in the narrative. So we both empathise and root for them, layering our own feelings and opinions into the story to bring it to life in unexpected ways. Which of course leaves us with a lot to think about after the lights come up. 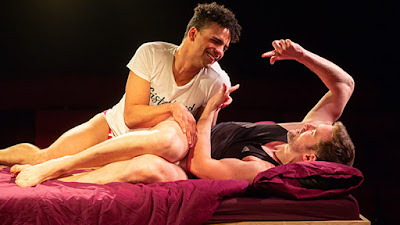