Cabaret: Making your mind up 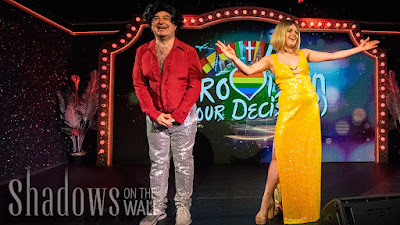 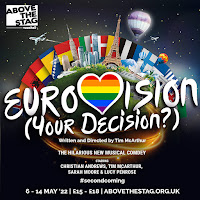 Celebrating its #secondcoming after last year's hit run, this superbly well-assembled cabaret show counts down to the real Eurovision Song Contest by taking audience members on a gleefully irreverent trip through the competition's long history. And while it sometimes gets a bit silly, the show manages to strike just the right balance between snarky satire and heartfelt homage. It also features some seriously gifted performers in a terrific venue, complete with table service throughout the show.

As hosts Katie and Demetrius (Lucy Penrose and Tim McArthur) surge onto the stage with their shimmery outfits and ludicrous accents, we immediately know right where we are: a grand European arena filled with screaming fans, ready to watch a parade of colourful musical numbers, hopefully of the bonkers variety. What follows are 14 Eurovision hits, staged with elaborate choreography and performed with a riotous succession of wigs and costumes by four up-for-it performers: Penrose, McArthur, Sarah Moore and Christian Andrews.

The musical highlight is Penrose's soaring rendition of Sound of Silence (Australia 2016 - right), while the most enjoyably nutty number is the spacetacular Dancing Lasha Tumbai (Ukraine 2007 - below), only marginally more camp than the original version. A strong second place in this category would be the amusingly quirky staging of Think About Things, Iceland's catchy entry to the cancelled 2020 competition. The UK is represented by four numbers, including the blissfully choreographed ditty Flying the Flag (2007), Ooh Aah ... Just a Little Bit (1996), Making Your Mind Up (1981's winner) and a pastiche rendition of Cliff Richards' Congratulations (which only missed the top spot by one point in 1968).All four of the performers display impressive vocal and dance skills along the way, always with a sly wink to the audience. They are also more than willing to lose all of their dignity along the way. During the interval, we get to vote for our winner, followed by a special performance from a guest singer who delivers the standards All of Me and I've Got You Under My Skin with effortless charm. Finally, there's the voting tally, which is as ridiculous as we hope it will be, followed by a frantically quick change to get back into the right wigs for the big reprise finale. It's impossible not to have a great time at an evening like this, and it's hard to imagine that it's not on its way to becoming a beloved annual event on its own.For information, visit ABOVE THE STAG >